LA Times Reporter and 'Ferguson' Actors Won't Concede That 'Hands Up, Don't Shoot!' Is a Myth

At a March 4 press conference, U.S. Attorney General Eric Holder grudgingly bowed to the truth relating to the events surrounding the death of Michael Brown in Ferguson, Missouri in August of last year: "Michael Brown’s death, though a tragedy, did not involve prosecutable conduct on the part of Officer (Darren) Wilson."

In doing so, Holder effectively acknowledged the falsity of the claim, repeated hundreds of times in broadcast, online, and print media reports, that Brown cried "hands up, don't shoot!" before he was killed. The Attorney General also (cough, cough) wondered "how the department’s findings can differ so sharply from some of the initial, widely reported accounts of what transpired" and "how such a strong alternative version of events was able to take hold so swiftly, and be accepted so readily."

A current dispute between actors and a director in Los Angeles involved in producing a play about Brown's death, disingenuously covered by Matt Pearce at the Los Angeles Times (HT to longtime commenter Gary Hall), indicates that many people will not accept the truth Holder was forced to acknowledge, even when they directly confront it.

Unfortunately, the "hands up, don't shoot" lie was relayed around the world for months before it was utterly debunked in grand jury proceedings and testimony. Even then, the establishment press's interest in undoing the damage its false reporting had done has been spotty at best, and nonexistent at worst.

Some examples on the plus side have included, as NewsBusters' Matt Balan told us on March 6, an "Anderson Cooper 360" segment on CNN which, among other things, noted that "witness accounts (claiming "hands up, don't shoot!" were not credible – including the witness closest to Brown when it happened – Brown's friend, Dorian Johnson, whose words helped spark the mantra." On March 16, the Washington Post's Jonathan Capehart acknowledged that "‘Hands up, don’t shoot’ was built on a lie," and that "Brown never surrendered with his hands up, and Wilson was justified in shooting Brown."

But, as NewsBusters' Kristine Marsh noted on March 12, network news coverage at each of the three broadcast networks allowed repetition of the meme into news reports during the week following Holder's press conference without identifying it as false.

The bottom line is that the left's months of media-assisted brainwashing, largely driven by George Soros-funded groups, has mostly worked.

The success of that brainwashing has been brought into plain view by Phelim McAleer, who has scripted a play with lines consisting entirely of grand jury testimony relating to Brown's death. Many actors who originally signed on to the project won't believe that what they've been asked to read is true,  and would rather quit than be involved. Reporter Pearce also refuses to unconditionally let go: 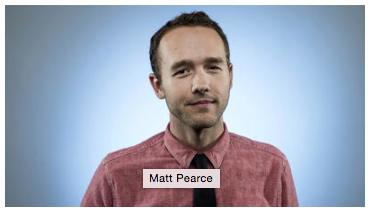 ... Now, in a case of art imitating life, the play is experiencing the kind of ill will and mistrust that erupted from the city it attempts to portray. Part of the 13-member cast is in revolt — (Veteran actor Philip) Casnoff and four others have quit — as the playwright and actors are locked in a fundamental disagreement over how to tell the story of Brown's death.

Though the grand jury declined to indict Wilson after some witnesses and physical evidence supported his account of events, the tone of the play shocked some actors.

"It felt like the purpose of the piece was to show, 'Of course he was not indicted — here's why,'" Casnoff said. He said that after he learned who the play's author was, Casnoff, who describes himself as "very liberal, left-wing-leaning," thought, "Whoa, this is not the place for me to be."

Through testimony taken from grand jury transcripts, the play ends with a witness telling a prosecutor that Wilson was justified in killing Brown. The audience is then supposed to vote on whether Wilson should have been indicted.

The cast members who quit questioned the motivations of the playwright, Phelim McAleer.

"The truth is the truth. If it doesn't fit in with their beliefs, they need to change their beliefs," said McAleer, who declined to say whether Wilson should have been indicted but said his research shows the hands-up claim is bogus. "All the people who testified that he had his hands up, it was pretty much demolished in grand jury testimony."

If the rest of the decidedly more liberal cast resigns — some actors are leaning that way — McAleer said he'll find a new cast. He also hopes to put the show on YouTube and bring the production to Ferguson itself.

"There's got to be some actors in L.A. who aren't scared of controversy," he said.

... He claims that he wrote this to try to get to the truth of it, but everybody's truth is totally subjective," said Veralyn Jones, an African American cast member who resigned.

Pearce's reference to "some witnesses" in the second excerpted paragraph is especially disingenuous. The fact is that witnesses whose testimony was credible and consistent with the physical evidence were the ones who supported Wilson's account of events, while the testimony of those claiming that "hands up, don't shoot" occurred was not. Some of the latter were so obviously lying that they arguably should have ended up facing perjury charges.

Pearce also gives readers the impression that McAleer unilaterally decided, based on "his research," that "hands up, don't shoot!" is a myth. No sir; it's the grand jury testimony that proves it. Even the most hardened, leftist agenda-driven attorney general in U.S. history — at least until Loretta Lynch, who was confirmed by the Senate yesterday — had to admit that.

A headline at Breitbart.com sums up the situation nicely, but tragically: "‘FERGUSON’ PLAY CAST MEMBERS QUIT AFTER LEARNING TRUTH ABOUT MICHAEL BROWN SHOOTING." That's because they've accepted what is wrong for months, and can't handle the reality — or, in the likely all too typical case of Veralyn Jones, they want to decide what the truth is, and the heck with the hard, irrefutable facts.

I'd like to be wrong, but I suspect, even as this post is being written, that the leftist lynch mob which can't handle the truth and wants it suppressed is working on preventing the play from taking place, or disrupting it if it does.