Starbucks, USA Today Claim Their 'Race Together' Intentions 'Are Pure,' But Their Race Knowledge Test Isn't

The Associated Press's most recent story on the controversial Starbucks USA Today "Race Together" campaign came out Wednesday evening.

In that story, AP Food Industry Writer Candice Choi quoted Starbucks CEO Howard Schultz at his company's annual shareholders' meeting predicting that "Some in the media will criticize Starbucks for having a political agenda," but that "Our intentions are pure." Perhaps they are, but I suspect that certain materials the company and USA Today have produced in connection with the campaign won't pass any readers' "pure intentions" test. Take USA Today's "How Much of What You Know About Race Is True?" test. Full contents follow the jump.

Here is the text of each of the test's 10 questions, and the answers USA Today provided. I have provided a bit of commentary after each one. 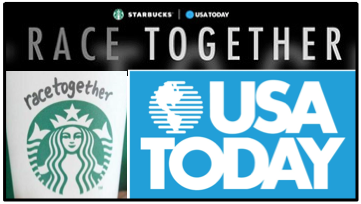 1. Question: True or False — Most people who identify themselves as African-American in the United States have some European ancestors.

Answer: True. "The Human Genome Project, which mapped out the complete human genetic code, proved that race could not be identified in our genes."

If "race can't even be identified in our genes," why in the world should we be so flipping obsessed with it?

2. Question: True or False — A new study finds that many people who identify themselves as completely white also have African ancestry.

Answer: True. "A January 2015 study of 23andMe DNA service customers found that about 5% of self-identified whites living in South Carolina and Louisiana have at least 2% African ancestry."

"Many" equals 5 percent? When did that happen? And how interesting it is that a question which presented itself as being about the entire United States only gave us an answer relating to two states in the South. That's probably because the answer in most other states will be far lower. The far more important point is that after seeing the answer to Question 1 ("race can't even be identified in our genes"), why should we care?

3. Which group recently surpassed Latinos as the fastest-growing group of new immigrants to the United States?

How interesting, given that Asians are routinely discriminated against in college admissions. If test scores were the truly dominant reason for positive college admissions decisions, Asian enrollment in certain of the more elite colleges would far higher, and black enrollment would be lower.

4. True or False — Almost 10% of blacks are new immigrants from African or Caribbean countries, especially Haiti, the Dominican Republic and Jamaica.

Answer: True. "Research conducted by USA TODAY shows the nation is in the midst of a "second wave" of immigration not seen since the Ellis Island period of the 1880s-1920s. Today's wave is largely composed of young, non-European immigrants."

Here's an irony alert. Those who are in this question's 10 percent tend to advance relatively quickly in society, while many blacks born here continue to languish in the welfare state's liberal plantation. Additionally, black immigrants' kids tend not to do as well as might be expected. Doesn't that call into question the existence of pervasive racism, and point to problems with the liberal-dominated public education system's treatment of all blacks?

5. What percentage of the nation's wealth is controlled by white people?

Answer: 90%. "Despite blacks' and Latinos' gains in education and income, wealth in the United States remains concentrated among whites. Calculations vary, but researchers agree that the blacks are the least wealthy group in America."

The test's designers clearly want readers to believe that this situation could only exist because of racism.

Answer: True. From 2002 to 2007, the number of black and Hispanic-owned businesses increased by more than triple the national rate, according to the U.S. Census Bureau's Survey of Business Owners. Black-owned businesses continued to be among the fastest-growing segments of the U.S. economy in terms of number of businesses and total sales.

That's a nice stat, but why did it cut off at 2007? There's plenty of data available for later years. Here's why: The economy, led by many of the same people who want to see racism where there isn't any, has stunk for the past seven-plus years, while the awful  alleged "trickle-down" economy of 2002-2007 really was pretty decent for everyone.

7. What percentage of black children live in single-parent homes?

Answer: 67%. "Everywhere you look, households are changing. Kids Count Data Center notes about 24.6 million children reside in single-parent homes, with another 3.6 million in homes where neither parent is present."

"Everywhere you look, households are changing." I guess we're supposed to think that this single-parent thing is sort of a positive phenomenon. No it's not.

Answer: True. "According to the Pew Research Center, fewer than half (46%) of U.S. kids younger than 18 live in a home with two married heterosexual parents in their first marriage."

The answer's text doesn't answer the question. Percentages aren't numbers. What are the numbers, people?

9. True or False — Over the past 20 years, the rates at which blacks both commit and are victims of homicide have shown sharper declines than those of whites.

While it's good that homicide rates are down, the relative incidence of other violent crimes may not be. And I'm quite sure that almost nobody considers the since-1999 "stabilized" rate acceptable.

10. What percentage of the growth in the country's working-age population between now and 2050 will consist of immigrants and their U.S.-born children?

Answer: 93%. "According to a report by the Pew Research Center, the U.S. "immigrant stock" could grow from around 76 million now to more than 160 million by 2050, at which point it would comprise an all-time-high 37% of the U.S. population."

I guess that if anyone is bothered by this, it has to be because of racism, when the real reason to be concerned is that more recent U.S. immigrants, particularly those here illegally, have shown a deeply troubling resistance to assimilation.

As I wrote earlier today (at NewsBusters; at BizzyBlog), my take on race, and I suspect the take of the vast majority of Americans, is that "America’s greatest race challenge is ending its obsession over race, and moving towards a society where people are judged, as the Rev. Martin Luther King Jr. envisioned, not on the color of their skin, but on the content of their character."

The Starbucks-USA Today campaign, however "pure" its intentions, is a step backwards toward that truly pure goal. USA Today's partnership with Starbucks casts doubt, perhaps permanently, on its ability to ever cover stories containing a racial element objectively and fairly.