In an almost completely expected decision, the Department of Justice yesterday announced that it "found insufficient evidence to pursue federal criminal civil rights charges against George Zimmerman for the fatal shooting of Trayvon Martin on Feb. 26, 2012."

In reporting on the announcement, Jennifer Kay and Eric Tucker at the Associated Press were predictably selective in recounting the details of the case while ignoring or downplaying others.

The pair's openinig paragraphs avoid a critical element of the case (HT Powerline; bolds are mine throughout this post): 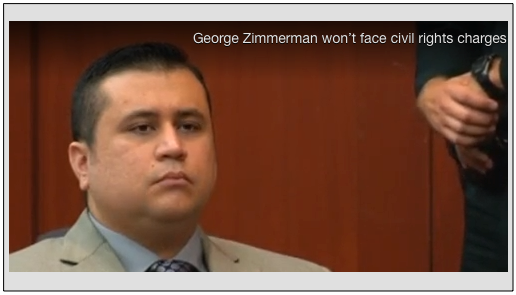 George Zimmerman, the former neighborhood watch volunteer who fatally shot Trayvon Martin in a 2012 confrontation with the teenager, will not face federal charges, the Justice Department said Tuesday.

The decision, announced in the waning days of Attorney General Eric Holder's tenure, resolves a case that focused public attention on self-defense laws and became a flashpoint in the national conversation about race two years before the Ferguson, Missouri, police shooting.

Zimmerman has maintained that he acted in self-defense when he shot the 17-year-old Martin during a confrontation inside a gated community in Sanford, Florida, just outside Orlando. Martin, who was black, was unarmed when he was killed. Zimmerman identifies himself as Hispanic.

Once Zimmerman was acquitted of second-degree murder by a state jury in July 2013, Martin's family turned to the federal investigation in final hopes that he would be held accountable for the shooting.

This narrative makes it sound like what was involved was perhaps a heated conversation. It was of course much more than that. It was a violent fight. The "unarmed" Martin was pommeling Zimmerman, according to the police report leaked one month after the incident:

But the Orlando Sentinel newspaper has obtained a leaked copy of the account he gave police in which he claims the teenager was the aggressor.

He told officers that he had followed the teenager but had lost sight of him. He was then walking back to the vehicle when Martin approached him from the left rear and they exchanged words.

Martin, according to Zimmerman's evidence, then asked him if he had a problem. The older man told police that he replied no and started to reach for his cellphone but Martin said, "Well you do now," or something similar and punched Zimmerman in the face.

When Zimmerman fell, he claimed, the teenager got on top of him and started slamming his head into the ground, prompting him to shout for help.

Tapes of the 911 calls from neighbours caught these cries for help, and Martin's family have been adamant that they came from Trayvon as Zimmerman attacked. But Zimmerman in turn claims it was him. According to the Sentinel, police say their evidence backs this account. One eyewitness has said he saw the teenager on top of Zimmerman.

It was only then that the neighbourhood watchman pulled out a gun and shot Martin in the chest at close range, Zimmerman's reported account claims.

The AP's Kay and Tucker finally acknowledged that "Martin straddled him and punched him during the fight" — in their eleventh paragraph.

As to being "held accountable," the grand jury's acquittal means that Zimmerman committed no offense for which he needed to be "held accountable." The Justice Department's "investigation" was a politicially expedient step designed to inoculate it against a charge that it didn't care. Its announcement Tuesday essentially proves that.

Interestingly, the AP report John Hinderaker at Powerline found at the Minneapolis Star Tribune's web site has been superseded at the wire service's national web site by an expanded analysis by Curt Anderson, the wire service's legal affairs writer, carrying the following headline: "WITHOUT HATE CRIME, US LIMITED IN PROSECUTING ZIMMERMAN."

That report's opening leaves readers with the impression that DOJ's hands were tied because "George Zimmerman was not a police officer." The headline and content seem to give away a presumption that in a just world, Zimmerman would have been charged, even though a jury acquitted him, and even though such charges would constitute a form of double jeopardy.

Finally, both AP reports described Martin as "returning from a store" when the confrontation began. They failed to note that he had just bought AriZona Watermelon Fruit Juice Cocktail and Skittles. Martin's defenders claimed he had just bought iced tea and Skittles, as if those purchases identified him as a poor innocent teen instead of the wannabe thug that he arguably was.

In July 2013 after Zimmerman's acquittal, I noted that commentator Bill Whittle had put 2 and 2 together, and had explained the overwhelmingly likely reason why Martin had just made those purchases:

... we were told that Trayvon -- again, an innocent child, simply went to the store to buy some candy and some iced tea. But it wasn't just any candy, and it wasn't iced tea. It was Skittles candy, and a drink called Arizona Watermelon Fruit Juice Cocktail.

... The prosecution continued to keep up this deception by referring to this drink as "iced tea," and some have speculated that they did so to avoid the racial sterotype of black people and iced tea. But there's a much better explanation.

Because if you take Arizona Watermelon Fruit Juice Cocktail, a bag of Skittles, and add simple cough syrup, you get a cheap, codeine-based drink called "lean."

Now there's an entire online subculture devoted to the use of "lean," which Trayvon was familiar with.

We have screen grabs of him trying to score some codeine online, and instead being told he could make some "fire-ass lean" using cough syrup, skittles, and Arizona Watermelon Fruit Juice Cocktail. Seems a bit of a coincidence to me that the only two items he picked up out of the entire 7-11 were two-thirds of the ingredients needed to make "lean."

Now additionally, we have a report from his autopsy that revealed a form of liver damage in this otherwise healthy young man just a few days short of 18 that are consistent with the kind of trauma that excessive "lean" usage does to an otherwise healthy liver.

And most importantly, the online subculture refers to a number of psychological symptoms associated with the use of "lean," the two most prominent being extreme physical aggression and paranoia.

Martin's "extreme physical aggression and paranoia," and a man's natural, self-preserving reaction to it, were likely major factors in his death. Sadly, the so-called "civil rights" community, and the press which unskeptically peddles its narratives, will never admit that.