Let's say that a Republican or conservative governor or big-city mayor (yes, there actually are quite a few) was in a heated dispute with his state's or city's police union. Let's further say that this official decided that his or her best method for whipping up support was to order the staff to (ahem) "ask" GOP legislators or council members to issue public statements of support while bashing the cops. If such a campaign were exposed, that town's or state's press would appropriately be all over it. That public official would also get plenty of negative national attention, especially if he or she already had a bit of a national profile.

So let's see how far and wide — my prediction is "not very" — the following report from New York City online publication DNAinfo goes — especially at the New York Times, which has itself editorially attacked the police while indulging and ignoring the serious transgressions of "protesters" who have threatened them (HT Weasel Zippers; bolds are mine): 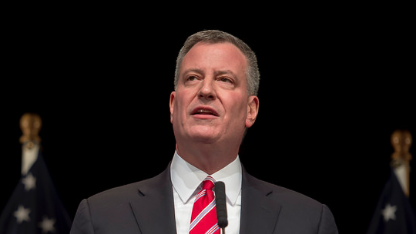 While Mayor Bill de Blasio was personally coaxing the city’s police union presidents to meet with him, his top aides were on the phones with lawmakers urging them to blast PBA President Patrick Lynch and other officers for turning their backs on the mayor following the assassinations of two of New York’s Finest, DNAinfo New York has learned.

As late as Monday afternoon — the same time de Blasio was speaking with police union leaders to set up Tuesday's détente to possibly mend their fractured relationship — the mayor’s government affairs honchos were privately cold-calling the city’s Democratic delegation of city and state elected officials, asking them to publicly criticize Lynch and those officers who dissed the mayor.

“City Hall wanted me to blast the Patrolmen’s Benevolent Association for turning their backs on him,” a Big Apple legislator told “On The Inside.” “They called up Monday, said they were calling all of us, and that it was our obligation to stand up defending the mayor."

There was an expectation from City Hall that "because they were calling that we should do whatever they ask," the lawmaker said.

"Obligation"? Really? Doesn't a mayor have an obligation to support his men in uniform instead of undercutting them in public and giving aid and comfort to the very people who have inflicted harm on some his officers?

... The two lawmakers said most of their colleagues who they spoke to felt like they were not going to take the bait from de Blasio's team.

“The mayor’s people said that this had nothing to do with politics, so I said, 'then what is the purpose of this call?’” one of the lawmakers added.

No kidding. The vulnerable mayor was looking — no, actually expecting as a condition of continued perceived loyalty — to be propped up by others.

An update at DNA Info shows that the Mayor still can't be trusted, even after being confronted with the truth:

Walzak confirmed that de Blasio aides cold called city Democrats but insisted they "did not ask elected officials to 'attack' anyone," and only requested the politicians "support the families" of the slain NYPD officers.

Asked about Walzak's claim, one of the lawmakers who received a call said it was "preposterous" and "not reality."

de Blasio actually expects us to buy that rubbish?

What the cops have every right to expect is a sincere, unconditional apology from de Blasio for his statements and actions during the past several weeks. Instead, the Mayor continues to violate the first rule of holes: When you're in one, stop digging.

It also cannot be emphasized enough, based on news accounts from across the nation during the past several days, that the longer this goes on, the more danger cops everywhere will face.