The St. Louis Post-Dispatch gets today's prize for most absurd headline, as seen after the jump (bolds are mine throughout this post): 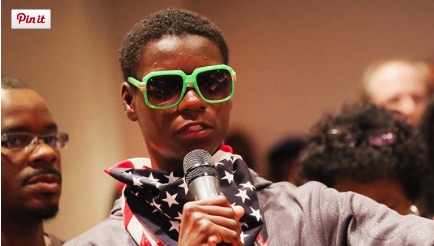 One of the most frequently quoted and photographed Ferguson protesters was charged Saturday with setting fire to a Berkeley convenience store last week.

St. Louis County police arrested Joshua Williams, 19, of St. Louis, on Friday after several local media outlets and store surveillance captured images of him trying to set a pile of wood on fire outside the QuikTrip on North Hanley Road early Wednesday.

Williams confessed to setting fires at the store in a videotaped interview, according to court documents.

The obvious question for the Post-Dispatch and reporters Christine Byers and Michele Munz: Given that Williams has confessed to his crimes in publicly available documents, shouldn't you at the very least be using the past tense in describing Williams's alleged advocacy of "peace"?

... The Post-Dispatch, Bloomberg, USA Today and the Associated Press have quoted and photographed Williams. On Oct. 13, he was photographed walking arm-in-arm with author and activist Cornel West toward the St. Louis University campus where protesters staged a sit-in.

Williams’ most recent confrontation of St. Louis Police Chief Sam Dotson during a Ferguson Commission meeting landed him in the pages of this newspaper.

Getting back to the Post-Dispatch's headline, it's much closer to the truth that Williams has never been a legitimate "peace" advocate.

National Review Online's Ryan Lovelace noted early this morning that the nation's establishment press, which has lionized Williams, should have known better — and in many cases, likely did but chose to perpetuate the myth — months ago (links are in original):

Joshua Williams is everywhere: protesting in Ferguson, Mo., Washington, D.C., and Cleveland, Ohio. He has perfected the skill of catching the attention of journalists and using them to elevate his claims of police brutality to national attention. Quoted or photographed in countless articles in publications including the New York Times and USA Today, Williams claims police in Ferguson, Mo., targeted him because he is black. The truth, caught on tape by National Review Online, is much different.

... Williams’s story has been portrayed in the media as that of an innocent victim fighting back against authority. When Williams interrupted a Ferguson City Council meeting in September, The New York Times published a photo of Williams’s disruptive antics with a caption that only said he “posed a question to the City Council.”

But sources tell NRO that Williams, who did not answer requests for an interview, did not live in Ferguson when the protests began and gave conflicting answers about where he came from. Fellow protester Tony Rice — who lives alone — tells NRO that Williams has stayed with him since the end of August. Williams came to Ferguson to protest the Ferguson police’s involvement in the death of Michael Brown. Williams routinely clashed with the cops and has claimed that he has been arrested multiple times.

... (Williams) claimed that he’d been arrested five times. Each night after the police released him, he said, he went back out on the street to let the cops know that, as he says, “I don’t care about them.”

NRO visited Ferguson in November and observed something different. On a cold fall night before the grand jury decided against indicting police officer Darren Wilson for killing Michael Brown, Williams stood across the street from the Ferguson Police Department.

“Come on, I’m ready,” he shouted. “Your time starts now. You have five minutes to arrest me, or we’re going to bang it out in the streets.”

NRO didn’t see whether the police complied with his request, but it was neither the first nor the last time he goaded the police. In October, the Post-Dispatch photographed him burning an American flag; in December, he prevented St. Louis police chief Sam Dotson from speaking freely at a meeting of the Ferguson Commission (an independent group commissioned by Missouri governor Jay Nixon to make recommendations about how to make progress in Ferguson) by getting in Dotson’s face and shouting Dotson down.

Williams’s rhetoric has turned violent on several occasions. On the night of the grand jury’s decision not to indict Wilson, his comments on Twitter grew much more hostile. As Ferguson burned, Williams tweeted, “Who burned s*** down we burned s*** down,” and “Man the whole west flossant [sic] is on fire f*** with us again we gave you 108 f****** days to indict him but you didn’t so we burned it down.”

Nonetheless, Williams’s supposed martyrdom has won him admiring profiles. MSNBC depicted him as a hero of the summer protests.

... After the tragic execution-style murders of two New York Police Department officers this weekend, Williams took to Twitter and showed little remorse. “U WANT US TO RESPECT YOUR TWO COPS BUT WE CANT GET JUSTICE FOR OUR PEOPLE F*** YOU AND COP,” Williams tweeted.

The Post-Dispatch reports that Williams still has his defenders:

On Friday night and Saturday morning, a small group gathered at the St. Louis County Justice Center in Clayton to protest Williams’ arrest. Some were in disbelief over his reported confession and said the video images are not clear enough.

“Josh is one of the young activists, and all of us have taken close to him. We got to know his heart, and he got to know ours,” said Bishop Derrick Robinson, of Kingdom Destiny Fellowship International. “He’s a great kid, an educated kid, a child who knows what he wants and is very active in the community.”

Gosh, that's the same stuff we heard about Michael Brown, isn't it?

Let's see how much ink and bandwidth Williams's arrest and confession get at now-humiliated nationwide establishment press outlets. Sadly, the smart money is on "very little."