The Wall Street Journal reported on the Stephanopoulos scandal on Friday, and found another national TV anchor in the database. “Judy Woodruff, the co-anchor and managing editor of PBS NewsHour, gave $250 in 2010 to the foundation’s aid efforts for victims of the Haiti earthquake.” She was a senior correspondent then, before Jim Lehrer retired.

Woodruff initially recalled the donation as being for $1,000, but based the $250 amount as the one on her 2010 tax return. Woodruff tried to make it sound bipartisan:

“I made the gift in response to an urgent joint appeal from former President Clinton and then-President George W. Bush for aid to the victims of the Haiti earthquake,” she said in an email Thursday. “Seeing the massive loss of human life and the terrible conditions for survivors, I wanted to make a contribution and saw this as a way to do that.”

The Journal reported “Ms. Woodruff has interviewed Mr. Clinton several times over the course of her career. In 2013, she interviewed him at the annual meeting of the Clinton Global Initiative about his ambitions for the organization.”

That came on September 23, 2013, in the usual round of softball interviews that Bill Clinton does at that annual-confab time. Woodruff had just been named co-anchor with Gwen Ifill.  Like Stephanopoulos, Woodruff did not disclose she was a donor to Clinton’s efforts: 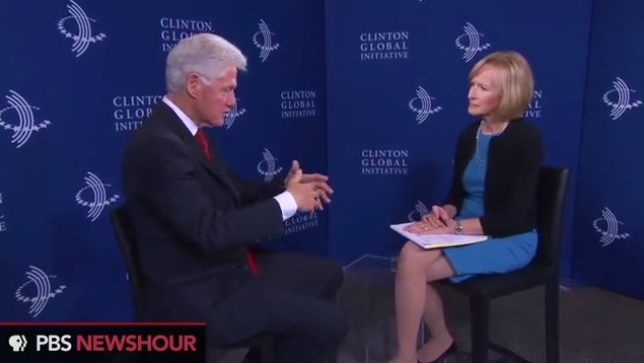 JUDY WOODRUFF: So the Clinton Global Initiative, this is your ninth year, is that right? The theme this year is Mobilizing for Impact.  Most people, I think, in this country look at the incredible poverty that exists around the world, developing countries. What do you see? How do you measure that progress has been made?

BILL CLINTON: I will give you an example. That`s the best way to answer it, from our own foundation. In Malawi, we have got this anchor farm, about 400 acres. We teach people the best farming techniques. We buy for the farmers cheaper seeds, cheaper fertilizer, cheaper insecticide. We take their crops to market for free. We store them properly so they can wait until they can get a high price. And we`re talking about women on an acre of land farming with a hoe.