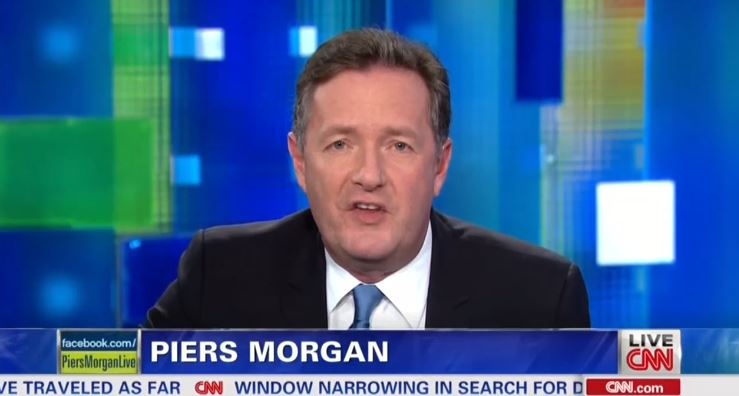 Piers Morgan, who was forced out at CNN this spring due to low ratings, gave an interview to Politico where he lashed out at his former colleague, Anderson Cooper. The journalist also discussed plans for a new documentary pushing gun control. Regarding Cooper, Morgan complained, "Could I have done with a better lead-in? Yes... Anderson is a great field reporter, but does he drive big ratings at CNN, outside of a big news cycle? I don’t see any evidence of it."

Morgan continued, quipping that he and Cooper "were never the easiest of bedfellows." He added that the two "never really clicked." This isn't the first CNN figure Morgan has attacked. In a series of tweets, he slammed Larry King, complaining that the famous host has been "a constant poisonous twerp towards me for three years, and I'm bored with it."

The "guns movie" is, as Morgan describes it, a "Bowling For Columbine"-style documentary about America’s failure to curb gun violence — an issue near and dear to his heart, as any viewer of CNN knows. Morgan's four-year tenure at the network will almost certainly be remembered for his aggressive criticism of the gun lobby.

"I’ve been approached by a couple of big independent producers in Hollywood to make it," Morgan tells me at one point. Later in the interview, he says: "I've got a big offer on the table from a big player in Hollywood to fund it. We're not quite where we both want to be yet, but we’re negotiating hard and other people might come in."

Morgan used the final edition of his low-rated CNN program to lobby for gun control.