The mother of a beheaded American is speaking out against the Obama administration, slamming the "appalling" handling of her son's kidnapping and death. Diane Foley's comments follow the declaration by Steven Sotloff's family that the government treated them like "pawns." Just as in that case, ABC and NBC ignored the aggrieved family.

Talking to Anderson Cooper on Thursday, Mrs. Foley announced, "As an American I was embarrassed and appalled. I think our efforts to get Jim freed were an annoyance." She added, "Jim would have been saddened. Jim believed until the end that his country would come to their aid. We were, you know, asked to not go to the media."  [MP3 audio here.]

Speaking of the Obama administration, she flatly declared, "But the reality of the bureaucracy... was such that we were not helped."

Foley made statements that echoed that of anti-Iraq war mom Cindy Sheehan. Speaking of the President's planned air strikes, she insisted:

DIANE FOLEY: His whole strategy to, you know, eliminate ISIS, and the terror threat and -- is important, obviously. And so maybe part of -- perhaps part of the strategic way of doing it is to bomb them. You know? And to engage in force. But that only caused Jim's death, really.

Yet, although the networks loved Sheehan's attacks against George W. Bush, NBC and ABC on Friday skipped Foley's complaints against Obama on Today and Good Morning America. This is despite a combined six hours of available air time. Only CBS This Morning covered her statements. 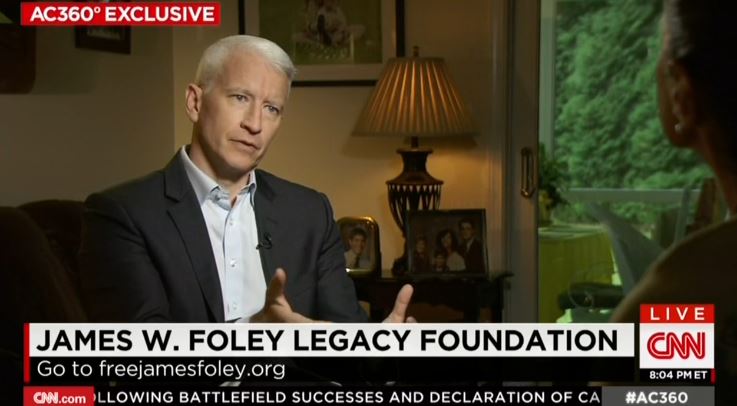 This Morning co-host Charlie Rose related, "The mother of The mother of James Foley, an American journalist beheaded by ISIS, is lashing out at the Obama administration." CBS devoted one minute to Mrs. Foley. Not much, but more than the other two networks.

On Monday, a representative for Steve Sotloff's family appeared on Cooper's CNN show. He accused the White House of playing "a game of bureaucratic infighting and Jim [Foley] and Steve [Sotloff] are pawns in that game and that's not fair."

Just like on Friday, only CBS This Morning bothered reporting on this, allowing one sentence to the aggrieved family.

A partial transcript of the September 11 Anderson Cooper segment is below:

FOLEY: Well, Anderson, I -- we met wonderful people within our government, who cared, who wanted to help. But the reality of the bureaucracy and really-- was such that we were not helped. We really weren't.

COOPER: You didn't feel like they were there for you, that they were really–  The U.S. government really was not?

FOLEY: Not at all. And yet we don't blame -- I don't want to blame people because that is not going to help.

COOPER: So did you feel that -- your family, that Jim was a priority for the government?

FOLEY: No. We really didn't. You know?

FOLEY: Anderson – As an American I was embarrassed and appalled, you know. I think our efforts to get Jim freed were an annoyance. You know. And --

COOPER: An annoyance to the government.

FOLEY: Yes. Jim would have been saddened. Jim believed until the end that his country would come to their aid. We were, you know, asked to not go to the media. To just trust that it would be taken care of. We were told we could not raise ransom, that it was illegal. We might be prosecuted.

COOPER: You were told you would actually be prosecuted?

COOPER: If you raise a ransom.

FOLEY: Yes, that was a real possibility, told that many times. We were told that our government would not exchange prisoners, would not do a military action. So, we were just told to trust that he would be freed somehow miraculously. And he wasn't, was he, you know? So we, Americans, failed him. I -- it's nobody's fault, it's just the fault of a lack of discussion around it and understanding of the problem.

COOPER: Were you surprised when you were told that you could be prosecuted if you tried to raise money for your son's --

COOPER: There was a rescue effort apparently made?

COOPER: You wish it would have been sooner?

FOLEY: We feel that the location -- their location was known for more than a year.

FOLEY: Yes, they had been moved a couple of times, that's true when there was a movement of ISIS from Aleppo to Raqqah. There were several moves in that transition. But there was also two times when they were at a location that we were aware of for months.

COOPER: Where he was?

FOLEY: Anderson, to be honest, that part was rather frightening. We tended to know everything before the FBI or anyone else.

FOLEY: Because we did everything we could. I went to Europe several times to interview the European freed hostages just so I could find out how Jim was, what's going on, where are they, what are the chances of this or that. It was a frightening thing. And the FBI was -- everyone was kind and supportive. But the FBI used us for information.

COOPER: Really? They came to you for information?

COOPER: About his location, about how --

COOPER: How much communication did you have?

FOLEY: Only when I went -- when I asked for it. The enemy is ISIS, the terrorists. The enemy is not our government. I hope that through this legacy foundation that our government will be willing to dialogue with our family and other families so that we can make American citizens in captivity more of a priority. And that we can work together to live up to the best of what we should be as Americans. Jim was killed in the most horrific way. He was sacrificed because of -- just a lack of coordination, a lack of communication. A lack of prioritization. As a family, we had to find our way through this on our own.

COOPER: As I was watching the President speak last night I was wondering if you were watching.

COOPER: And so what was going through your mind?

FOLEY: This is -- this whole strategy to, you know, eliminate ISIS, and the terror threat and -- is important, obviously. And so maybe part of -- perhaps part of the strategic way of doing it is to bomb them. You know? And to engage in force. But that only caused Jim's death, really.

You know, I guess all I'm trying to say is I feel that our government needs to be shrewder, smarter, willing to negotiate with these people who hate us so that we can find better ways to rid ourselves of terror.

COOPER: For you, are you able to see Jim as he was in life or is that image of him at the end something that is seared in your --

FOLEY: Anderson, what keeps us going is definitely the way Jim lived. Jim will live on. And that is our deepest desire, that this foundation make that happen. In the best sense that our government can have better response to American hostages and their families. That we can continue to promote freedom of speech and education in the world. That the best of America can be promoted. That's our hope, Anderson.

COOPER: And that's his legacy?

FOLEY: That is his legacy.