A week ago, as seen in a video which gained some national attention on Monday, New York Congressman Thomas Suozzi, answering a constituent's question about President Donald Trump, suggested that "the Second Amendment comes in" as a factor "if the president was to ignore the courts."

Eight years ago, the press treated a statement by Nevada GOP Senate candidate Sharron Angle referring to "Second Amendment remedies" as a call for armed insurrection. Suozzi's comment, which on substance comes closer to such a call than Angle's, has thus far been ignored by the establishment press's primary gatekeepers and most other outlets.

AUDIENCE MEMBER: I know we have a constitutional concern, checks and balances. But what I don't know is if there is a mandate from the House or the Congress as a whole?

SUOZZI: Yeah, Senate and the House.

FIRST AUDIENCE MEMBER: So there's a mandate before the President. If he does not execute that mandate, what does our Constitution say would happen?

SECOND AUDIENCE MEMBER: How much time is he allowed?

FIRST AUDIENCE MEMBER: How much time is he allowed?

CONGRESSMAN THOMAS SUOZZI: I don’t know the answer to the question.

You know, it’s really, it's really a matter of putting public pressure on the President and making it public, which is hard to break through the news cycle with all the different things. And it’s probably about taking it to the courts as well.

And then you know, this is where the Second Amendment comes in, quite frankly, because you know, what if the President was to ignore the courts? What would you do? What would we do? So —

SUOZZI: The Second Amendment is the right to bear arms. That's why we have it.

Unlike Congressman Suozzi, Sharron Angle's related comments in 2010 to a Nevada radio talk show host did not tie "the Second Amendment" to a specific presidential action:

SHARRON ANGLE: I feel that the Second Amendment is the right to keep and bear arms for our citizenry. This not for someone who’s in the military. This not for law enforcement. This is for us. And in fact when you read that Constitution and the founding fathers, they intended this to stop tyranny. This is for us when our government becomes tyrannical...

TALK SHOW HOST BILL MANDERS: If we needed it at any time in history, it might be right now.

ANGLE: Well it’s to defend ourselves.

By contrast, Suozzi's comment indicates an openness to the idea of going on offense "if the President was to ignore the courts." In June 2010, the Times devoted a 300-word editorial to denouncing Sharron Angle's comments as "Far Over the Line."

The Times editorial falsely claimed that Angle advocated taking up arms if she were to lose against Harry Reid, but only a fool or an agenda-driven editorial writer would interpret her wish to "take out" Reid as anything but a desire to defeat him electorally. Searches on Suozzi's last name at 10:00 a.m. ET on Tuesday at APNews.com, an AP raw feed, and at the New York Times returned nothing relevant.

There is coverage at CNN.com and at Newsday, which predictably has a "Republicans attack" headline: "Rep. Suozzi denies GOP claim of 'irresponsible' call to arms." Newsday reports that Suozzi "said in an interview that he wasn’t calling for any armed response against the president, but he said that remains one of the original purposes of a Second Amendment."

More broadly, a Google News search on "Suozzi second amendment" (not in quotes, past week, sorted by date, without duplicates) at 11:45 a.m. on Tuesday returned only 18 items, predominantly center-right blogs and outlets. Only four results (from Roll Call, New York magazine, The Hill, and a McClatchy story found at a local South Carolina newspaper) were from establishment press outlets or wire services with national reach. 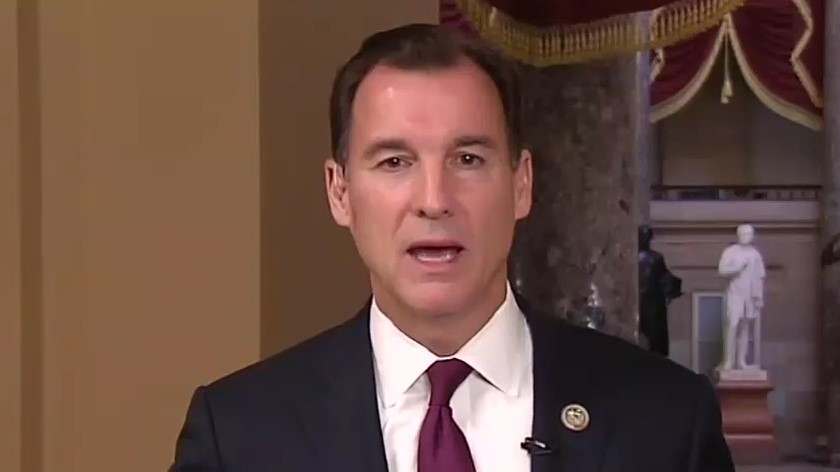 Congressman Suozzi appears to have had nothing to say about "the Second Amendment" when the Obama administration "violated federal Judge Andrew Hanen’s Feb. 16 injunction against President Obama’s immigration amnesty plan" in 2015.

PS: A search of network TV finds no coverage yet of the Suozzi remarks. But MRC's Rich Noyes reports that when candidate Donald Trump suggested in August 2016 that “If she gets to pick her judges, nothing you can do, folks...Although the Second Amendment people — maybe there is, I don’t know,” that vague remark drew almost 13 and a half minutes of network evening news coverage.

ABC led with it on their August 9, 2016 evening newscast. David Muir claimed "The outrage is immediate, some saying this is not a political misstep, that this is a dangerous threat." Their two-day total coverage: 4 minutes, 59 seconds.

CBS also led with it that Tuesday night (August 9). Scott Pelley: "Trump goes off script and, critics say, over the line....This time it was a remark that some took as a threat of violence against Hillary Clinton or the Supreme Court justices she might appoint if elected President." The CBS Evening News coverage spanned three nights, totalling 5 minutes, 36 seconds.

NBC spent the least time on it, just 2 minutes, 50 seconds over two nights (Nightly News was busy promoting NBC's Olympic coverage from Rio), but Lester Holt carved out a slot at the top of the August 9 newscast for the controversy: "A remark that, at best, was a joke and, at worst, was an implied threat of violence."