At Her Death, AP Whitewashes Life of Lawyer Who Defended and Aided Extremists

Lynne Stewart, whose long legal and illegal career included representing domestic terrorists in the 1980s and relaying a convicted Islamic terrorist's commands to his underlings last decade, died on Tuesday. The Associated Press's Larry Neumeister went out of his way to conceal and sanitize important aspects of Stewart's life and beliefs in his Wednesday afternoon obituary.

Here is the AP's headline, followed by Neumeister's opening paragraphs (bolds are mine throughout this post):

A rebellious civil rights lawyer who was sentenced to a decade behind bars for helping a notorious Egyptian terrorist communicate with followers from his U.S. jail cell has died of cancer, three years after her release from prison.

Lynne F. Stewart, who had an unorthodox career representing small-time criminals and radicals alike before losing her law license over her dealings with the terrorist, Omar Abdel-Rahman, died Tuesday at her Brooklyn home, said her husband, Ralph Poynter. She was 77 and had recently suffered strokes.

"She marched to a different drummer, and the drummer was good," an emotional Poynter said Wednesday.

This critique could go on and on, but a later paragraph, already partially quoted above, particularly stands out: 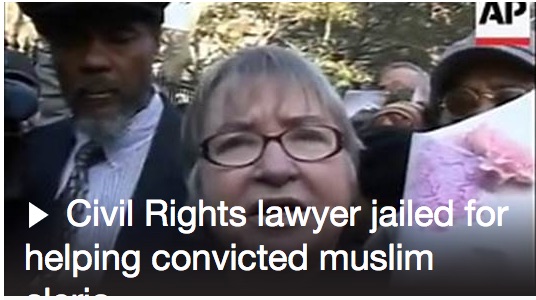 Despite illness, Stewart remained outspoken to the end. A longtime believer in armed struggle as a way of fostering political revolution, she said in a September interview that the killings of police officers had acted as "a deterrent" against the killings of unarmed civilians by police.

Neumeister was deliberately vague, and did not refer to the specific events which led to Stewart's comment. He didn't even describe the "killings" involved as recent, so average readers might believe that Stewart was referring to incidents which occurred decades ago.

We know that Neumeister's omission was deliberate because the AP reporter did identify those events in a September 2016 dispatch relaying the status of Stewart's health and her violence-supporting views:

A once-prominent New York civil rights lawyer ... is still battling the cancer that earned her compassionate release from prison over two years ago — and she is still as radical as ever, even expressing support for the killers of police officers.

... the cancer has neither killed nor muzzled Stewart, a longtime believer in armed struggle as a way of fostering political revolution.

Asked about the recent ambush slayings of police officers in Dallas and Baton Rouge, Stewart said of the gunmen, "They spoke for some of us when they did that."

"They are avengers," she said. "They are not brazen, crazed, you know, insane killers. They are avenging deaths that are never and have never been avenged since the '60s and '70s."

Stewart said she believed that the murders had, at least briefly, acted as "a deterrent" against the killings of unarmed civilians by police.

Stewart was describing the following cold-blooded killers, who weren't even born until 1991 and 1987, respectively, as somehow, in 2016, "avenging" deaths which occurred 40-50 years earlier:

Stewart's alleged "deterrent" effect on cops didn't deter a significant rise in the murders of unarmed civilians by other civilians in 2016.

In his Wednesday obituary, the AP's Neumeister also "forgot" to include the tribute from the radical National Lawyers Guild, of which Stewart was a longtime member:

The National Lawyers Guild today joins with all those in the country fighting for a better and more just society in mourning the loss of Lynne Stewart. We are proud and honored by her membership in the Guild and were proud to have stood by her throughout her prosecution for being a vigorous and conscientious advocate for her client, Sheik Omar Abdel-Rahman, her imprisonment and her eventual release.

... The forces of repression never silenced her in life and will not silence her in death.

The National Lawyers Guild, as described here in a very long post which reviews the book Days of Rage, became infamous in the 1970s as its members gave "funding and support" to "fugitive domestic terrorists." In some cases, NLG lawyers even sheltered these people as they were "still bombing" domestic targets.