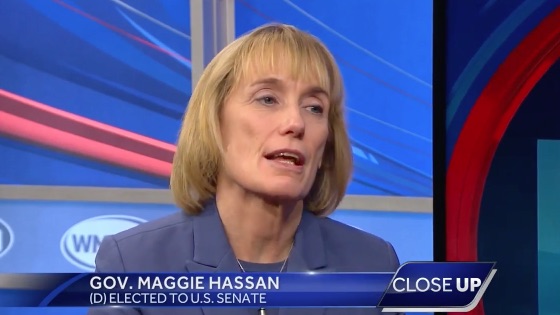 Demonstrating the power of fake news to influence uninformed people, just-elected Democratic Senator Maggie Hassan of New Hampshire brought up a thoroughly discredited Washington Post story at the Senate confirmation hearing for Former General John Kelly. President-Elect Donald Trump has nominated Kelly to be the nation's next head of the Department of Homeland Security.

Hassan brought up the Post's story on a late-December "infrastructure" attack by "a hacking group connected with the Russian government" on a Vermont utility as if it was an established fact — which, of course, it's not.

The obvious problem is that Post's reporting been completely discredited, to the point where the paper was forced to concede that it the incident did not penetrate the electric grid, and that it was "not linked to any Russian government effort to target or hack the utility."

To run down the history:

As will be seen in the following video from from C-SPAN's coverage of Kelly's Tuesday hearing (HT to Daily Wire via a heads-up from a longtime commenter at my home blog), that didn't stop Hassan from treating what the Post reported and had to walk back as still relevant:

SENATOR MAGGIE HASSAN (D-NH): I wanted to just start by asking a question on cybersecurity that's kind of hit my neck of the woods a little bit in the last couple of weeks.

Two weeks ago, the Washington Post reported that a hacking group connected with the Russian government managed to infiltrate the Burlington Electric power company in Vermont. And New Hampshire and Vermont, as you know, have many shared utility connections along the border between the two states.

The transcript demonstrates that Hassan bought the entire original Post story hook, line and sinker, including the penetration ("infiltration") into the grid and the involvement of a Russian-connected hacking group.

Kelly, as would be expected, given that he would like to receive as many "yes" confirmation votes as possible, did not confront Hassan's ignorance himself in his immediate response. Perhaps another Republican on the committee did.

Or perhaps — probably wishful thinking — news outlets in the Granite State will let their readers, listeners and viewers know that their state's just-elected senator still believes a widely-distributed story which has been completely discredited.

Meanwhile, given the fundamental dishonesty and irresponsibility demonstrated in their initial reporting, along with their reluctance to adequately correct it, Hassan's performance may have led to high-fives in the Post newsroom. After all, Hassan's gullibility, which would appear extend to her staff, which one would hope was involved in her hearing preparations, demonstrates that many people still believe the paper's fake story.

Since that fake story was designed to indirectly hurt Donald Trump, I suspect that the Post believes that in the end, their bogus story damaged him just a bit. In their perverse world, that may be cause for celebration. It certainly seems that damaging Donald Trump is far more important than telling the truth and adequately correcting falsehoods — apparently even if what little credibility the Post still has ends up going down in flames in the process.