Readers who have spent any time reading economic dispatches from the establishment press since the presidential election have likely noticed that its business journalists have taken to praising the alleged wonders of the economy President Barack Obama is passing on to President-Elect Donald Trump.

Current reality renders the praise completely undeserved, but of course that's not stopping them from engaging in it.

Sam Dorman at NewsBusters noted on Friday, a few hours after the release of the jobs report, how at least two journalists were impressed with the news that the unemployment rate had dropped to 4.6 percent with 178,000 seasonally adjusted jobs added. Unfortunately, the 0.3-point drop in the unemployment rate occurred primarily because the reported civilian labor force shrank, and the ranks of those who could be in the workforce but remain discouraged or on the sidelines for other reasons grew. In other words, the decline in workforce participation back to late-1970s levels which has marked the Obama era continued unabated.

Additionally, business reporters didn't seem particularly troubled by the unexpected 3-cent drop in average hourly wages, and either ignored or pretended to be impressed with the 2.5 percent rise (before inflation) in that metric during the past 12 months.

The most laughable instance of "Gosh, isn't the Obama economy just wonderful?" fever was at the Politico on December 2. This is not the Onion; the website's story by Ben White actually had the following headline and subheadline:

Trump inherits Obama boom
The president is handing his successor an economy that’s now the envy of the world.

Let's stop before getting to White's content. We're obviously not in a boom; how obvious that is will be seen later in this post.

The U.S. economy remains the envy of the world for three reasons.

First, it was the envy of the world coming into the Obama administration, which despite its strident efforts, wasn't able to topple it from its long-held throne.

Second, the country currently has enormous untapped potential on two key fronts: employable people and energy. That potential would unfortunately remain largely untapped if the policies of the Obama administration were to continue into 2017. But thanks to Trump's election and the voters' direct repudiation of Obama, who put his record on the line by campaigning so hard for Hillary Clinton, the malaise in the labor market and the government's energy-related obstruction are probably not going to continue — which explains why the stock market has been so bullish since Election Day.

Third — and this point cannot be overemphasized when making a comparison to the rest of the world — since it first took office, Obama administration officials, who embarked on a massive and failed Keynesian experiment in stimulus in early 2009, and continued to attempt demand-side stimulation during the rest of Obama's time in office through record budget deficits facilitated by the Federal Reserve's creation of trillion of dollars out of thin air, have convinced most of the world's largest nations that adopting similarly aggressive Keynesian economics will cure what ails them.

Unfortunately, it has proven to be the poison, not the cure. The European Union's economies, with the exceptions of Germany (whose economy has done well, but is now seriously threatened by the migrant crisis) and to a lesser extent Great Britain, fell for the Keynesian claptrap, and have underperformed at the worst possible time, given the continent's disastrous age demographics. Japan, despite over a decade of bad Keynesian experience, doubled down, and has since spent most of its time either in recession or barely avoiding it. China has even bought in; to the extent it can be discerned, the nation is now missing its admittedly ambitious growth targets. Australia, which has not bought in, has outperformed the U.S. during the past several years.

None of the affected economies have the USA's current ability to absorb many years of damage from dangerous economic policies without suffering serious consequences. (To be clear, the US now has serious structural problems and is also running out of time.)

So if it is indeed still the case that the U.S. economy is the envy of the world, it's largely because its leaders spent the past eight years talking most of the rest of the world, using a phrase Obama used in connection with an unrelated event, into "act(ing) stupidly." Thus, the USA's average annual growth rate of just over 2 percent during the Obama looks "good" — but only in comparison to a world of Keynesian underperformers.

Now, let's get to a few paragraphs from Ben White's content, which is about as much as most readers will be able to stand. Every statement presented below is either obviously false or highly disputable as evidence of genuine strength, so I won't bother refuting any of them except for the final paragraph's breezy description of current economic growth:

... Trump instead will take office with an economy near full employment and wages and spending rising. The economy is in such strong shape that the Federal Reserve is likely to raise interest rates again later this month to try and cool things off. 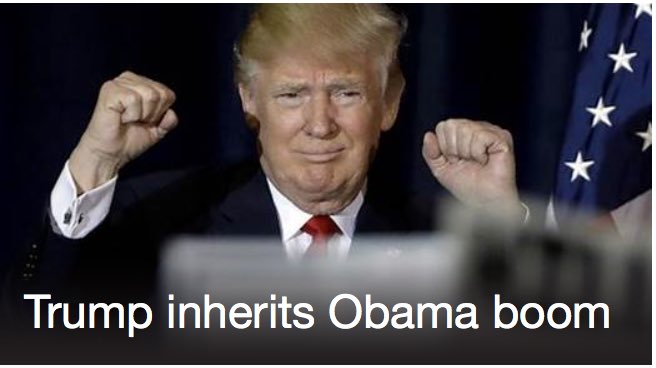 ... Standard & Poor’s economists said this week ... (that) “Largely forgotten in all the rhetoric and fanfare of the campaign is the fact that data show the world's largest economy continuing to expand at a reasonably good pace.”

The recent gains are now allowing outgoing Obama officials to take something of a victory lap as they head out the door.

... The economy grew at a 3.2 percent pace in the third quarter. It could slow down again in the final quarter of the year. But the pace of job growth remains quick enough to keep the jobless rate falling and wages rising as employers compete for a smaller share of available workers.

The 3.2 annualized percent growth rate (an adjective White "somehow" deceptively forgot to include; the fact that he used it in reference to wages many paragraphs earlier is no excuse), which is presented as something to celebrate, would finally hit the realm known as "barely acceptable" if sustained for 3-4 more quarters. Unfortunately, the three previous quarters averaged 1.0 percent, and current forecasts for the fourth quarter of 2016 range from an annualized 2.0 percent (Associated Press and Moody's) to 2.6 percent (Atlanta Federal Reserve). In a dispatch last week demonstrating how far the acceptability bar has dropped during the Obama era, the AP's Martin Crutsinger actually characterized projected fourth-quarter growth of 2.0 percent as "still-solid."

Fortunately, for those who need to counter the fever-swamp left with one quick graphic argument, Paul Bedard at the Washington Examiner has presented a chart showing the running 10-year per-capita economic growth record of the U.S. economy since 1966, and yours truly has appropriately enhanced it (10-year increments and key historical moments have been added by me):

The unprecedented and disastrous decay in per-capita GDP growth since 2007, when Democrats took control of Congress (hastening and worsening the "Great Recession"), and especially since November 2008, when Barack Obama won his first election, should be obvious — even a to leftist.

Two years ago, I looked at the 8-year track record of regular GDP from the early 1950s through two years ago, and came up with very similar results.

The idea that the U.S. is currently in an economic boom is a sick fantasy.

But that posture won't last long. Already, after eight years with the same problem going virtually unreported, the press is noticing that it's "the quality, not the quantity, of the jobs that is in question," and, suddenly, that "part-time work" is "the new normal."