A friend told me he couldn't wait to see the videos of crowds of cheering Carrier workers when Donald Trump arrived at the company's plant in Indianapolis to celebrate management's decision to keep a substantial portion of its production there instead of moving it to Mexico.

If there such are photos or videos out there, I haven't seen them. There may be a reason for that apparent absence or lack of prominence beyond the press's long-recognized desire to keep the public from seeing large, positive crowds at Trump appearances. The real concern here appears to be widespread recognition of the fact that the President-Elect, half of whose followers Democratic Party nominee Hillary Clinton outrageously described as "a basket of deplorables ... racist, sexist, homophobic, xenophobic, Islamophobic, you name it," just worked to save the jobs of a workforce that is half African-American.

To its credit, the New York Times is one of the few outlets to recognize this reality in its reporting, even front-paging its related story on Thursday.

To its detriment, that story is the paper's sole recognition out of at least eight related articles, and it came in an otherwise glum analysis piece about how "Trump Saved Jobs at Carrier, but More Midwest Jobs Are in Jeopardy."

That web version of the writeup by Nelson D. Schwartz pictures two female African-American Carrier workers at its top, but waited over 20 paragraphs to discuss the plant's workforce makeup:

... In the popular imagination, the Indianapolis factory where 1,400 Carrier workers build furnaces and fan coils looks like a scene out of “The Deer Hunter” or “Norma Rae.” Blue-collar guys walking through the plant gate, lunch pail in hand, or white women barely getting by after years on the line. 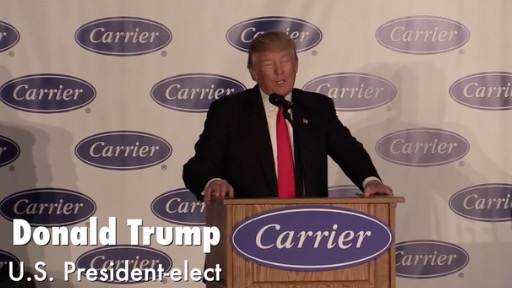 But the reality at the Carrier plant that Mr. Trump will visit on Thursday is very different. About half the workers are African-American, making it a much more diverse workplace than many white-collar settings.

Women account for a substantial portion of the work force as well, but the wages are anything but subsistence: over $20 an hour plus benefits for workers with just a high school diploma. That is an almost unheard-of level of pay for Indiana workers with that level of education in other sectors like food service and retail or even many health care jobs.

But as noted, the Times has done far better than the rest of the press. Various Google News searches attempting to find relevant items in the past week returned only three.

The two other than the Times piece included an item at the Indianapolis Star. Though it didn't go into the plant's workforce makeup, it did report an encounter Trump had with one employee:

Trump came towards the assembly line and said hello to a different employee, an African-American woman, greeting her and touching her arm. Pence said hello to her too. She brandished a navy Make America Great Again Hat and they posed for photos, as she flashed a huge smile and gave a thumbs up.

The remaining item is at the Huffington Post. In effect, it follows up on a post two weeks ago by the Labor Institute's Les Leopold. Though his feet are firmly planted in the left's fever swamps, his two columns are still noteworthy, because they likely explain why the press seems uninterested in communicating Carrier's workforce makeup.

On November 17, Leopold appeared eager to pin Trump with what he expected would be the President-Elect's failure to do anything to stop Carrier's Mexico move. But he also bitterly complained about how Trump had successfully "snatched" the plant-closing issue from the left and noted how, if he could pull it off, he would be assisting a diverse workforce:

Will Trump Betray 1,400 Carrier Workers? Will Progressives Let Him?

... While Hillary Clinton remained silent on this impending catastrophe, Donald Trump turned this facility into the poster child for what’s wrong with U.S. trade policy.

... Carrier became the 100 percent battering ram with which to pound Hillary Clinton and her embrace of NAFTA and other trade deals. In doing so, Trump snatched the plant closing issue away from the Democrats, something the party apparatchiks didn’t recognize until the Trump votes poured in from the Rust Belt.

The Carrier case, however, was not just the usual media meme about Trump backing the less educated, white working class. In fact, the threatened Indianapolis plant is 50 percent African-American. Women make up half the workforce on the assembly lines and the facility also employs dozens of recent Burmese immigrants, well regarded by their co-workers. So making this facility great again actually means coming to the aid of America’s increasingly diverse labor force.

... If progressives were well organized ― a very big if to be sure ― we should join with these workers (represented by the United Steelworkers) to build mass demonstrations at United Technologies headquarters, hedge fund offices and the White House. Such a series of protests would keep the Carrier shutdown on the front burner and provoke Trump to live up to his job promises.

Obviously, Leopold didn't expect Trump to move so quickly and successfully. His observations Thursday about the potential political impact of Carrier, though shrill, have a strong ring of validity:

President-elect Trump scored a remarkable PR victory by saving 1,000 of the 2,100 jobs that Carrier and it’s (sic) parent company, United Technologies, were outsourcing to Mexico from Indianapolis. During the campaign, Trump pledged to stop those jobs from leaving the country and he has come through.

... Now, his success (which, of course, is based on lavishing corporate welfare on Carrier/United Technologies) could lead to a mass exodus of working people from the Democratic party.

... America’s industrial workforce reflects the future, not the past. The 1,400 person Carrier workforce in Indianapolis, for example, is fifty percent African-American. Women make up half of the workers on its assembly lines, and ten percent of the employees are Burmese immigrants.

Trump’s effort to save these jobs contrasts starkly with the failure of the established Democratic Party to do anything at all about such devastating plant closures.

... none of that is particularly surprising given how deeply Wall Street/corporate elites are embedded within the Democratic Party. More troubling still is that party elites believe these relocations are economically justifiable.

The establishment press's last line of defense in protecting the Democratic Party its journalists overwhelmingly love from the beginning of the potential exodus Leopold identified is to do all it can make sure as few Americans as possible know how diverse the workforce is whose jobs Donald Trump helped save. Readers here would be well-advised to do all they can to make sure they are not successful.