An example of how unhinged press bias builds on itself was on display Sunday morning on CNN's Inside Politics.

Associated Press reporter Lisa Lerer told other panel members who were criticizing Hillary Clinton for her lack of an in-person public statement on the the results of the Thursday Brexit referendum that they should doubt the legitimacy of the result. She did so by referring to "all the great anecdotal stories on the BBC and other outlets" which found a few voters, clearly surprised by the result given pre-election polling which predicted that Remain would win, who said, in Lerer's words, "Well it was a protest vote. I didn’t think we’d leave."

Lerer started from a fundamentally flawed take on Clinton's post-Brexit in-person silence, claiming that the presumptive presidential nominee doesn't want to be seen as "capitalizing" on the vote — though, as panelist Nia Malika-Henderson noted earlier, that didn't stop Team Clinton from "sending fund-raising calls around this saying 'Listen, let’s not make the same mistake here in America'" — and then went into her "they really didn't mean it" riff:

LISA LERER, Associated Press: Right. It's an example of what you were saying, over-caution. 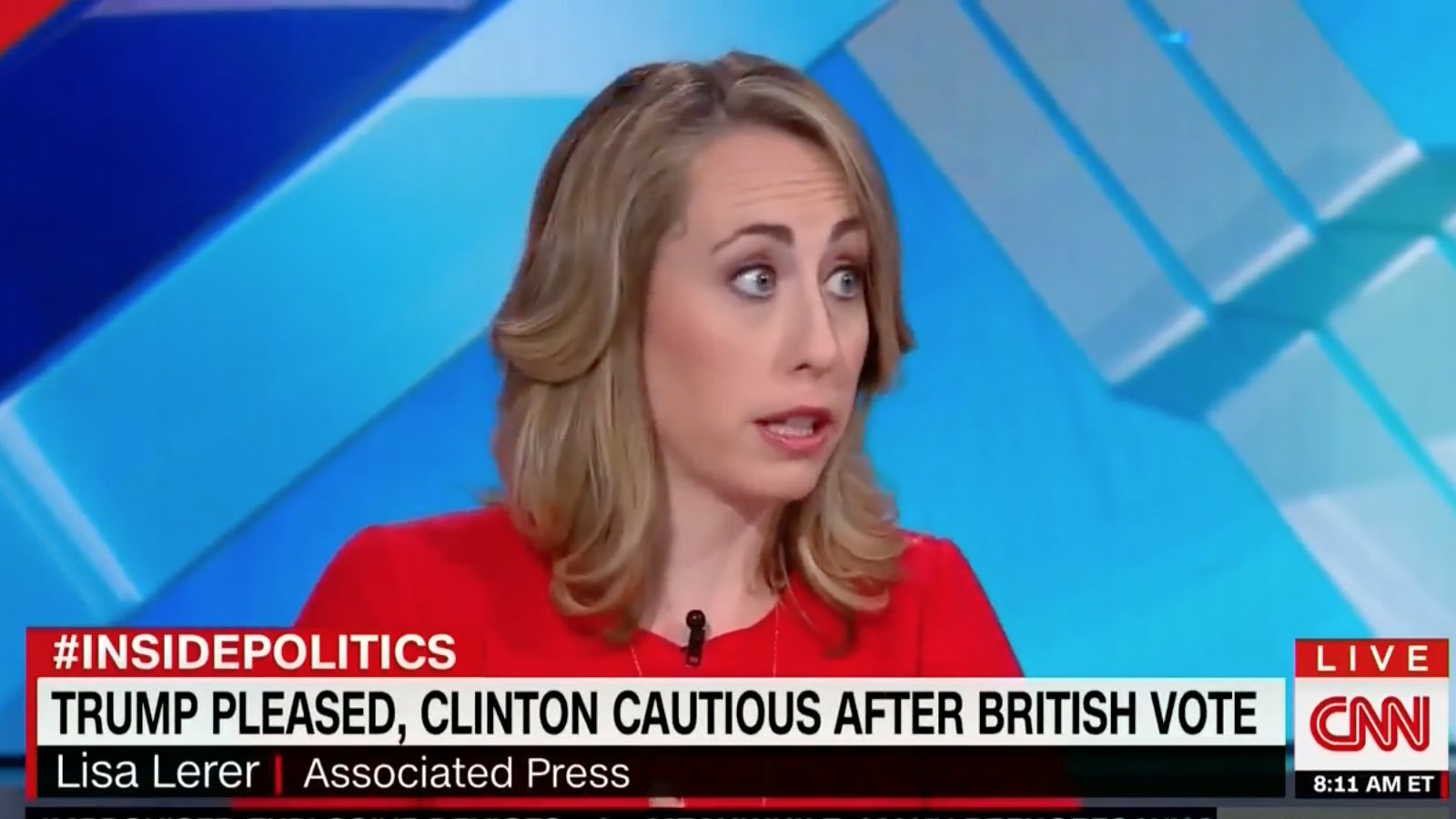 I mean, they’re so worried about her looking like she’s capitalizing politically on this thing that could be extremely painful, not only for British citizens but really the entire world, that they don’t want her out there. It very well could be a mistake. I think in these times of crisis people want to see their leaders — they also are hopeful that among Democrats that the Brexit vote could serve as a reminder that like, this can really happen. You know, you heard all these great anecdotal stories, y'know, on the BBC and other outlets of people who have said, "Well it was a protest vote. I didn’t think we’d actually leave."

LERER: So they're definitely talking to donors and fundraisers and their grass roots, saying, "Look what happened in England. Don’t be so sure that it wouldn't happen here."

The "it" would obviously be a victory by Donald Trump in November — which, in Lerer's view, would appear to be only possible if enough dumb, uninformed and rebellious voters do something they'll ultimately regret. Also note that Lerer believes the Brexit result has already created a "crisis." This would naturally lead one to believe that the AP reporter would also see a Trump general-election win in the U.S. in November as a "crisis."

Lerer's "(not) looking like she’s capitalizing politically" excuse-making for Mrs. Clinton is pathetic, not credible, and appears to be a spoon-fed Team Clinton talking point from a representative of an organization which has at times coordinated its presentation of "news" in sync with the campaign's script.

More than any single person on earth, Hillary Clinton embodies the crony-driven, corrupt international establishment which UK voters rejected. She clearly considers herself above laws whose violations have put others in prison for years. Additionally, she and her husband have made over $150 million taking de facto accessibility bribes thinly disguised as speeches paying $200,000 or more. What could Mrs. Clinton possibly say to a general audience of British Leave supporters and everyday U.S. citizens, who are just as if not more disgusted with their elites, which could possibly placate them?

Friday morning, the Clinton campaign lamely tweeted that "Our first task has to be to make sure that the economic uncertainty created by these events does not hurt working families."

Well, if Mrs. Clinton is going to make sure "working families" aren't hurt, she will have to publicly and prominently reverse the position taken by her former boss, President Barack Obama, who infamously warned in April that Britain would have to go to the "back of the queue" in trade negotiations if Leave supporters won the day. On Friday, White House spokesman Eric Schultz told reporters that "the President stands by what he said" in April.

One point ignored in connection with Obama's warning is the fact, according to U.S. government statistics, that no other country's companies have invested more in the U.S. than those from the UK (original source here). Someone genuinely interested in "not hurt(ing) working families" would put the country with the most direct investment in the U.S. at the front of the line.

Getting back to the AP's Lerer, she should know better, and probably does, than to apparently believe, based on clearly agenda-driven BBC and other reporting, that there are 635,000 Leave supporters — half of the official 1.27 million-vote margin — who now want to take their vote back.

Oddly enough (no, not really), Lerer presented the matter as if voters are getting cold feet about becoming independent from the EU. But if anything, the concern, to the extent that it exists, is that Prime Minister David Cameron actually carried through with his promise to resign in the result's aftermath.

The video below, carried at GQ.com, is apparently being seen in the U.S. press as an example of British regret over their Leave vote. But note that in the video excerpt, the gentlemen interviewed, apparently only known as "Adam," did not say that he would have voted differently:

"ADAM": I'm shocked about both, I'm shocked that we actually have voted to leave. I didn't think that was going to happen. My vote, I didn't think was going to matter too much, because I thought that we're just going to remain. And, um, the David Cameron resignation, uh, has blown me away to be honest. I think it's been, the period of uncertainty that we're going to have for the next couple of months, I think that's just been magnified now. Um, so yeah, quite worried.

One outlet carrying the BBC video, Metro.co.uk, has labeled this video "Man surprised to find out his vote matters." Also note that the video's URL nominates the man as "wins-moron-of-the-year-award." Charming.

What "Adam" is saying is, "Well, I believed your pre-election polling, and I thought that my vote, consistent with my beliefs, would be a protest vote." He did not say he would have voted otherwise.

One quite plausible way of interpreting this is to say that flawed pre-election polling freed up Leave supporters, clearly the majority in the UK, to vote their beliefs. So if the establishment press really wants to go there with their fever-swamp "Brexit regrets" stories, they need to look in the mirror, because it's their own polls' fault that Leave won. Too bad, so sad, folks.

If "Adam" is the best "great anecdotal story" Lisa Lerer at the Associated Press and the rest of the establishment press have, they are engaging in serious self-delusion.