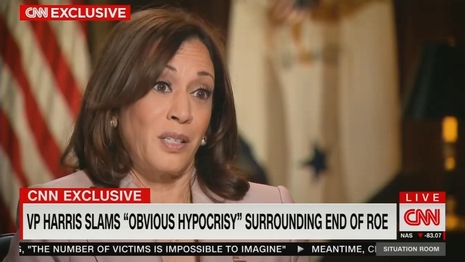 DANA BASH: There will be women who have babies who don't have the means to support the babies. Will the federal government act at all to increase support there?

Here's how Bash made a list of left-wing pressure questions.

-- Can the president do any of what you just talked about with his pen, without Congress?

-- But do you use the bully pulpit to say, yes, I support it?

She couldn't let this go:

HARRIS: I think the president has spoke, spoken on that issue and --

Like Chuck Todd, Bash wanted to raise the idea of punishing Brett Kavanaugh and other conservative justices for supposedly lying under oath about abortion in their confirmation hearings:

BASH: You were a senator when now-Justices Gorsuch and Kavanaugh testified about many issues, including obviously Roe at their confirmation hearings. Now, Gorsuch said it had been reaffirmed many times, Kavanaugh called it precedent on precedent. At that particular hearing, you were there. Some senators say that they intentionally misled the public and the Congress. What do you think?

HARRIS: I never believed them. I didn't believe them. That's why I voted against them.

BASH: Do you think that there is anything to be done now? I mean, there is no -- they were under oath.

HARRIS: I think that -- listen, it was clear to me when I was sitting in the chair a member of the Senate Judiciary Committee, that they were not -- that they were very likely to do what they just did. That was my perspective. That was my opinion. And that's why I voted like I did it.

BASH: Big picture, do you worry about two Americas now because of the patchwork of different states having different laws now that Roe v. Wade is no longer law of the land?

HARRIS: I don't believe we have two Americas. I believe that when you look at an issue, for example, like abortion and Roe, a majority of Americans support right of woman to make decisions about her body. When you look at something like the issue of the need for reasonable gun safety laws, the majority of people, including one of the numbers I have seen the majority of gun owners agree we should have reasonable gun safety laws.

So, I don't know buy into the idea that we have two Americas.

This segment of the Wolf Blitzer show was brought to you in part by ServPro.