Smollett Convicted of Hoax, CNN Turns It Into Fierce Attack on... Sean Hannity?

When Jussie Smollett was convicted on five of six counts for his hate-crime hoaxing in Chicago, CNN's "Reliable Sources" newsletter Thursday on the media didn't spend some time eating humble pie about being swindled. Instead, Oliver Darcy turned the occasion into an attack on Sean Hannity and the right-wingers. Like nothing demands CNN humbly examine themselves. Everything that happens calls for an attack on the right-wingers. 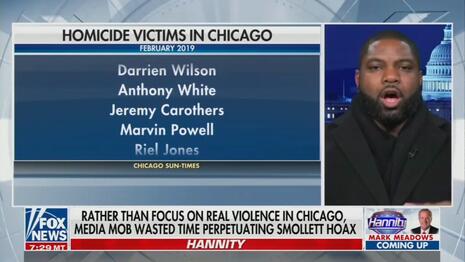 Under the headline "The hoax narrative," Darcy began with obviously factual Fox chyrons like

Then he complained (emphasis in the original):

The tactic is dishonest, yet simple: Take an actual act of deception, in this case one that was perpetrated by an actor and covered heavily by the press, and then use it to suggest that anything reported by mainstream sources cannot be trusted. Everything is a hoax.

Propagandists know that their power increases substantially when they can convince their audiences not to trust other sources of information. And so, Smollett's case is very valuable to them. They can hold up Smollett's guilty verdict and then attempt to extrapolate it onto other stories which are politically inconvenient for them.

This is mildly funny when his cohort Brian Stelter wrote an entire book on Fox News titled Hoax, which quite obviously attempts to convince their audience not to trust that source of information. So is he a "propagandist"? Or are all propagandists conservative? Did everyone who hammered the false Smollett narrative escape the term "propagandist"?

As he discussed the Smollett case, Hannity also brought up the "three-and-a-half-year Russia lie against Donald Trump" to claim the supposed dishonesty from the press "never ends."

We are seeing similar attempts to frame the January 6 insurrection at the US Capitol as a hoax fueled by the media and the Omicron variant is being depicted as a hoax invented by Democrats to supposedly steal the election.

Of course, the Russia probe, insurrection, and Covid are not examples of hoaxes.

CNN never admits that its dominant narrative of the Trump era -- that Trump colluded with the Russians to steal the 2016 election -- did not turn out to be true. CNN's Democrat minions energetically spread conspiracy theories funded by the Hillary Clinton campaign, starting with the phony Steele dossier.

Darcy wasn't going to engage on what CNN did to argue against conservatives as Smollett's story collapsed. After the guilty verdicts, conservative Twitter replayed Brian Stelter's attempts to suggest "we may never know" the truth, which doesn't seem like the proper pose for journalists who boast of being "pro-truth."

Cool. Were you there that night? Smollett's camp says he was the victim of a hate crime. The police dispute that. There isn't video of the alleged attack. Thus, we may never know what really happened.

The "CNN Media Unit" should be doing an examination right now about how the "mainstream media" that endlessly proclaims it is "pro-truth" should have been more careful. It should not have immediately rushed to judgment when someone cried "hate crime in MAGA hats," without confirming basic facts. Instead, it's all Fox News is terrible, Trump is terrible, and we have never done anything wrong, ever.

CNN's @oliverdarcy shamed Hannity for noting the media wasted time perpetuating the Smollett hoax. "Pro-truth" Darcy didn't engage with Fox News reporting the BLM statement that stood by the hoax because "In our commitment to abolition, we can never believe police"! pic.twitter.com/daJZneS2Uh