Far too much Washington journalism is reliant on anonymous sources, and the public has no earthly idea of the agendas and ideologies of the "senior government officials" or just "sources" who can be used to ruin a presidency or a congressional career.

Larry O'Connor at Townhall threw a strong headline at Team Zucker: "CNN Was Used to Spread Lies And They're Just Fine with That." He began:

When an anonymous source gives bad information to a journalist, that source should no longer be protected by the cloak of anonymity. And the angriest people involved in the entire scenario should be the reporter who passed on the bad information and the company that broadcast or published it.

So, why is CNN so complacent about one of the biggest fake stories in the entire Russian Collusion affair? 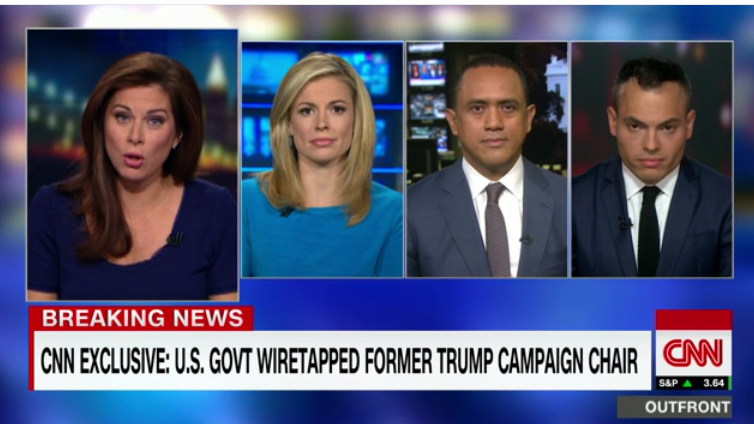 O'Connor referred to a story posted on September 18, 2017 by Evan Perez, Shimon Prokupecz, and Pamela Brown using anonymous sources to claim  the FBI had a FISA warrant to wiretap Trump campaign manager Paul Manafort before and after the 2016 election.

That story may have spurred judicial action: "It appears as though the press reports of the FISA warrant may have compelled the judge overseeing the Manafort grand jury to make a ruling that compelled Manafort's lawyer to testify (an apparent breach of attorney/client privilege)."

It turned out that Justice Department Inspector General Michael Horowitz emphatically stated in his report that not only did the FBI's Crossfire Hurricane  team not seek a FISA on Manafort, they  never even “seriously considered” FISA surveillance of Manafort! This was a serious Fake News moment.

So how did CNN respond? They posted an "Editor's note."

There''s no sense of follow-up. "CNN moves on," he complained. Almost six months later, there's no apology, just an insipid note that "the IG contradicts" their story. "This suggests that CNN and the reporters on this story are perfectly fine with their network being used to broadcast false information for political or criminal purposes. And that's... troubling."

O'Connor insisted "We should have a right to know who this anonymous source is. The anonymous source lied and planted a false story, and they may very well have done it to influence a judge, a grand jury and the outcome of a criminal investigation."