Eric Holder Howler: 'You Don't Talk About Partisan Things' at the Justice Department

Former Obama attorney general Eric Holder made an incredibly sober and unfunny appearance on Comedy Central on Tuesday night's The Daily Show. Host Trevor Noah turned to the Jim Comey book, noting Comey trashed Trump, that "He's a liar, he mistreats women, he's not fit to be in office." Holder quipped back: "Well, Jim got those three things right." But what about what he got wrong?

NOAH: A lot of people say 'yeah, but James Comey, you're the last person to criticize anybody because of how much you screwed up when you were in your position. As an attorney general, when you look at what James Comey did, and what he's now trying to say, what are your thoughts on the issue?

HOLDER: Yeah, 've known Jim for I think, 20, 25 years or so. I think he's a man of integrity. I think he is a good guy but I think he made a really substantial error in 2016 when he made that initial appearance and said that he was clearing Hillary Clinton and used that language and obviously made the statement later on. That was not something for an FBI director to do.

But when Noah asked that if Trump had a point in criticizing the FBI based on their behavior in 2016, Holder tried to claim he had no point whatsoever, and that somehow -- Strzok and Page text messages blotted out of our collective memory -- there was no anti-Trump animus in the Justice Department, just nonpartisan professionalism all around:

NOAH:  You said he made a mistake and said it was something that would give the FBI a bad name. The president of the United States currently says the FBI has a bad name. Do you think Donald Trump has a right then to say, that guys, the FBI has problems because of everything that James Comey and his fellow FBI agents have done? 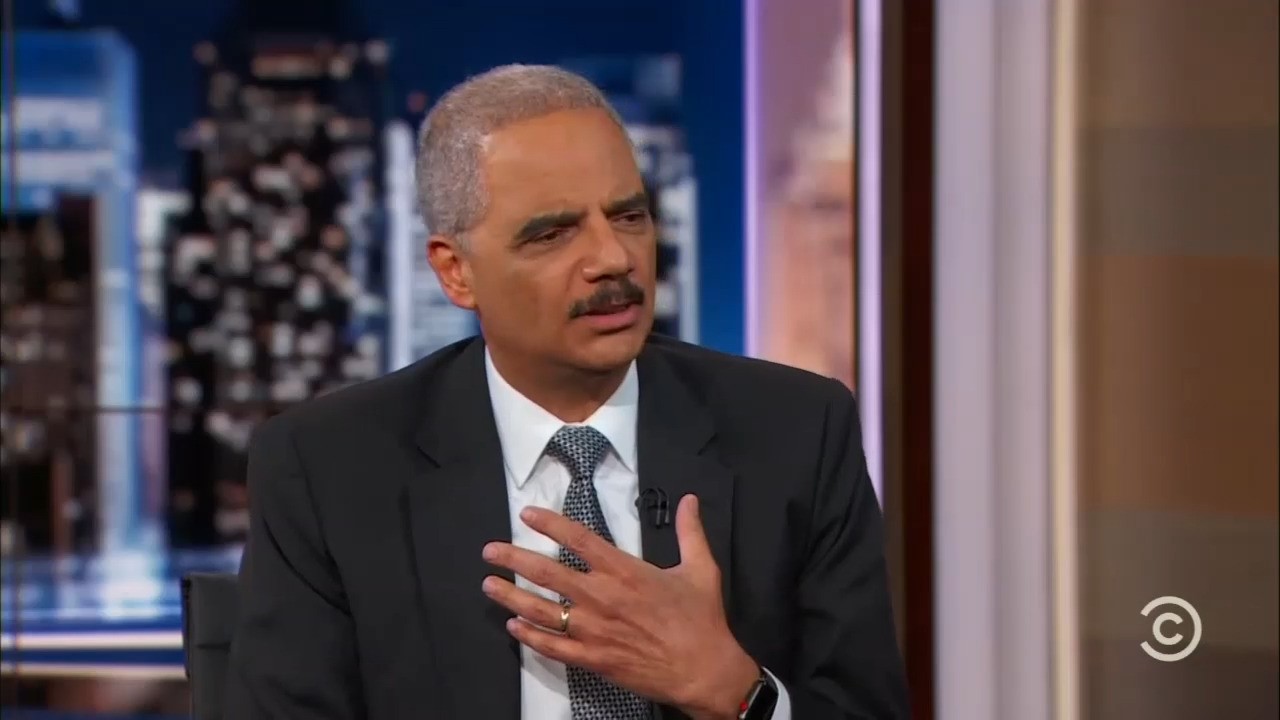 HOLDER: No. I mean, I think the president's criticism of people in law enforcement, prosecutors, FBI agents, is unwarranted, it's inconsistent with the facts. I mean, I worked with these folks almost all of my professional career. They're hard-working, they're dedicated. You know, you don't talk about partisan things when you are in the Justice Department. That's considered something that is -- that's inappropriate. And what I think -- so we hold these elections in 2018 and in 2020 and if the Republicans try to portray themselves as the law enforcement party, I hope people will remember the things Donald Trump has said about people in law enforcement.

NOAH: Yeah, things -- people will remember and they will vote for him again. His people don't care. I genuinely think they don't care.

Holder turned to the camera as if speaking to the audience and said "Don't do it!" Noah shot back: "I don't think they're watching you [because Trump voters aren't watching Trevor Noah]." Holder said "That's a good point. Someone could have switched off from Hannity tonight."