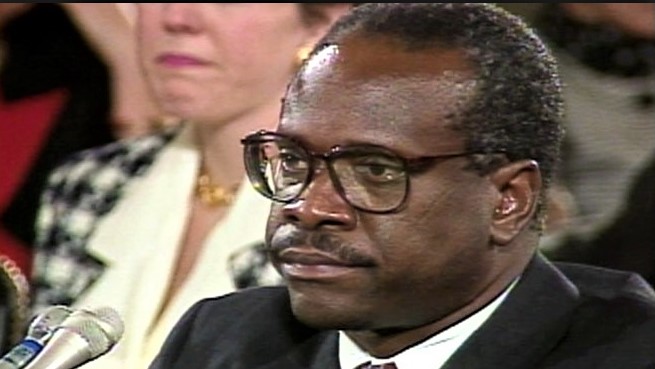 In the midst of all the sexual harassment shockers emerging from the media, Hollywood, and politics, the Left is still hailing Anita Hill as the patron saint of sexual harassment. An especially egregious case unfolded on Thursday afternoon, as the NPR show Fresh Air with Terry Gross spent a half-hour re-litigating Clarence Thomas as a harasser with his old journalistic nemesis Jane Mayer (now with The New Yorker) and feminist author Rebecca Traister.

The online summary was headlined “For Years, Anita Hill Was A 'Canary In The Coal Mine' For Women Speaking Out.” Only after they’d exhausted two-thirds of the hour (or 27 minutes of the 42-minute podcast) on Hill-Thomas, did they turn to the sexual harassment controversies that are not 26 years old.

Nothing in their evaluation of Hill ever looked into why Hill would come to Bill Clinton's defense in 1998. Take, for example, her Meet the Press interview in March of 1998, where she seemed to agree with Gloria Steinem that Kathleen Willey wasn't really harassed when Clinton made a "clumsy pass" in the Oval Office. She said he put her hand on his erect penis. This is more serious than Hill's story of porn-film chats. But Hill suggests Willey never suffered professionally...which neither did Hill, since Thomas served as a reference for her after she left his employment:

Hill also wrote a New York Times column in September of 1998 bizarrely insisting there were no sexual-harassment claims against Bill Clinton. Hill and the Times had a serious factual amnesia problem with Willey  and Paula Jones.

The substance of sex-related accusations against President Clinton differs dramatically from those raised against Justice Thomas or Mr. Packwood. According to their testimony, Mr. Clinton and Ms. Lewinsky viewed their relationship as consensual. While their immoral and undignified behavior no doubt had a negative effect on others in the office and in the Clinton household, it was not coerced, unwanted or illegal.

In the case of Mr. Packwood and Mr. Thomas, the accusations involved sexual harassment. To equate those allegations with an office affair is to trivialize issues of sexual predation that women face in the workplace and on the street.

When it came to journalism, Terry Gross only managed a nebulous conversation about the journalistic workplace, and no discussion of the actual accounts of sexual harassment in the media, from Rose to Lauer. They couldn’t even get the list right:

GROSS: So let's talk about what's going on in our profession, which is journalism. And has anybody actually written a list of all the people recently alleged to have committed acts of sexual harassment or assault?

TRAISTER: Why don't you go? And I'll see if I can fill any others in.

TRAISTER: (Laughter) That's what I - that's my list as well.

GROSS: OK. So do you know most of the men who have been accused?

MAYER: I do, yeah. I think I know all but O'Reilly. Basically I've either worked with them or know them personally.

GROSS: So how has that affected your comprehension of what is going on?

MAYER: I mean, I find this area very fraught, uncomfortable in some ways, you know, satisfying in some ways to see some people finally get - you know, have time catch up with them.

This list – unlike a list Gross read in her introduction – did not include public-radio star Garrison Keillor, who is a columnist, but somehow is still identified as a folksy entertainer first. It did not include NPR’s senior news editor David Sweeney. It did not include NBC's Matt Zimmerman (Lauer's co-harasser), or CNN’s Teddy Davis, a producer for Jake Tapper. It missed recently fired employees at Vice, Vox, and The Guardian, all NPR favorites. John Nolte at Breitbart has a list of 23, which includes some old cases, like Geraldo Rivera and Rolling Stone founder Jann Wenner.

Terry Gross certainly didn’t dedicate an hour just to the sexual harassment reported inside NPR, which looks seriously hypocritical since NPR was the primary promoter of Anita Hill’s unproven testimony against Thomas. Terry Gross should be doing an entire hour on Al Franken, since she has so routinely promoted him in giggly interviews for decades.

Jane Mayer was a little wild with her analogies on office politics in the media. First she warned “I don't want to see the workplace become sort of overridden with a kind of a Taliban-like mentality that the sexes have to be separated and that any kind of sexual behavior between colleagues is something that is terrible.” She noted she met her husband during a job interview at The Washington Post, and although she didn’t take the job, she did start her relationship at the office.

But when asked why women weren’t stronger in fighting harassment, Mayer used a slavery analogy: “This exaggerates it's a little bit, but it's a little bit like asking, you know, the slaves why they didn't complain about the masters. I mean, the power was on the other side, and it went all the way up through to the top of these companies. And you really had very little power as a young female working almost exclusively for men. And so there was kind of nobody to complain to, including the HR departments.”

With only five and a half minutes left of the broadcast/podcast, they finally arrived at Bill Clinton’s accusers, mostly Juanita Broaddrick’s rape charge.

There was an anxiety I think then, too, about making out women to be sort of victims of male sexuality and not being protectionist feminists. There was a defense of his behavior, but it was also politically motivated. He was a Democrat in the White House, and he was on the side of feminist concerns. He was appointing Ruth Bader Ginsburg to the Supreme Court. He was a pro-choice president after 12 years of Republican presidents.

Feminists were invested in -- to some degree in protecting him politically. In part, that's because feminists wind up dependent as long as men have a disproportionate share of the power in politics. We are dependent on them if they are on our side. But it wound up - the fact that many feminists did defend Bill Clinton in that moment and sort of skimmed over the Juanita Broaddrick claims meant that that conversation that had been kicked off by the Anita Hill hearings got derailed.

Let’s note once again that NPR broadcast only one report on Broaddrick's rape allegation, on Morning Edition on February 25, 1999 -- the day after the Dateline NBC interview by Lisa Myers. The bizarrely titled evening newscast All Things Considered did not file a report at the time. Gross then asked whether Hillary should be re-evaluated for enabling Bill. They said no:

TRAISTER: I think that this process is forcing all of us to re-examine all of our behaviors, all of those of us who worked in places where we knew sexual harassment was taking place and didn't say anything for all kinds of reasons that made sense. But did that then enable the harassers to go on and do more damage to other women? One thing that I think is really important when it comes to how we talk about Hillary Clinton and how we talk about wives in general is that we not make the women responsible for the men's -- the harm done by men, which is a very...

MAYER: I mean, many of the family - many of the wives and the families in all of these cases are collateral damage, and they...

MAYER: Particularly, in the judgments that have been reached recently, most of these men have completely lost their ability to earn a living, and that is a very harsh judgment and very hard on their families too.

That's certainly not true of Charlie Rose or Matt Lauer, but it might fit the lesser-knowns that don't have millionaire estates. It's laughably untrue about the Clintons, who have enriched themselves many times over since the Lewinsky/Broaddrick days.