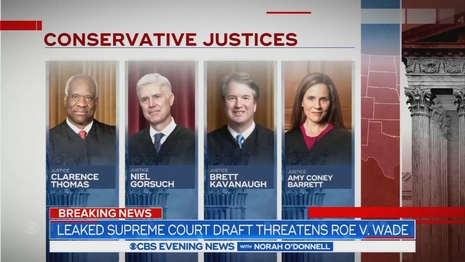 In the first hours after the leaking of a draft ruling showing the Supreme Court appears ready to overturn Roe vs. Wade, all three networks melted down over the “conservatives” on the court, labeling them a whopping 28 times. On these same shows, there were only 3 “liberal” labels and all of them came from CBS.

MRC analysts reviewed the morning and evening newscasts on Tuesday and the morning shows on Wednesday. ABC worried about conservatives on the high court 15 times, CBS 8 and NBC 5. Only CBS bothered with three liberal labels.

Politico published a draft opinion dated February 10th that appears to show five conservative justices are prepared to up end nearly half a century of abortion rights precedent.... The leaked opinion was written on behalf of five conservative justices.... All signs point to the fact that this conservative majority looks ready to end Roe once and for all.... This leak of a draft opinion from the Court is unprecedented and it reveals two big things: First, the conservative majority is prepared to do something no court has ever done, roll back a previously granted constitutional right. 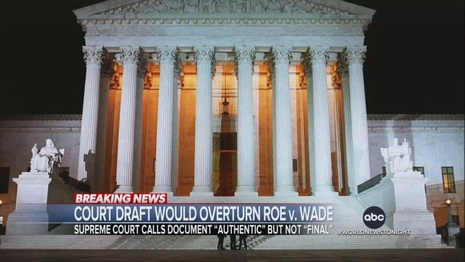 NBC journalists live in a label-free world for justices like Sonia Sotomayor, Elena Kagan and Stephen Breyer. NBC Nightly News anchor Lester Holt opened his show on Tuesday by worrying only about conservatives: “While such a decision from the conservative-leaning court has been widely expected, the magnitude and nature of the leak is another story.”

NBC reporter Kristen Welker on Wednesday’s Today fretted that the Court’s “conservatives” may have lied during Senate hearings: “Moderate Republican Senator Susan Collins, who voted to confirm conservative Justices Gorsuch and Kavanaugh, says she feels misled by their responses about Roe v. Wade during their respective confirmation hearings.”

(Note: Kristen Welker twice on Wednesday used this phrasing about the liberal justices: “The three Democratic-appointed justices would likely dissent.” This included a graphic differentiating between “conservative” and “Democratic-appointed” justices. This attempt at splitting the difference is not counted in our study.)

On Tuesday’s CBS Mornings, Tony Dokoupil explained, “Many experts have predicted the Court will roll back abortion rights after conservatives gained a 6-3 majority on the Court.”

CBS legal correspondent Jan Crawford on Tuesday morning noted that “the leaked Supreme Court draft opinion shows that the conservative majority would strike down Roe v. Wade, the 1973 landmark decision guaranteeing abortion rights.” After mentioning Sam Altio, she added that “four other conservative justices reportedly had voted to overturn Roe in the Mississippi.”

But unlike the other two networks, CBS appeared aware that there were actual liberals on the Court. Crawford insisted that “it's unclear whether Chief Justice John Roberts would have allowed the Mississippi law to stand without overturning Roe or whether he’d join the liberals.”

On Tuesday’s CBS Evening News, she again noted that Roberts may “join the three liberals.”

The leaking of a draft Supreme Court ruling, the potential overturning of Roe vs. Wade, these are all huge stories. Of course Clarence Thomas, Sam Alito and others are conservatives. But it’s just as obvious that there are extreme liberals on the Court. It would be nice if the journalists at ABC, CBS and NBC would admit that.