We live in chaotic times. The coronavirus is wreaking havoc on our country and our economy. The 2020 election is, justifiably, a secondary concern for many Americans. But journalists are still assisting the Democrats, ignoring sex abuse allegations against Joe Biden. And it won’t be long before they start making dire predictions about GOP doom. In that spirit, let’s take a look at this week’s FLASHBACK. Almost exactly four years ago, veteran CBS journalist Bob Schieffer predicted an epic loss for the Republicans in that year's presidential contest.

Appearing on the April 6, 2016 CBS This Morning, he speculated that, regardless of who GOP voters ultimately picked, there was no good option. Drawing a historical comparison, the former Face the Nation anchor imagined, “We may be seeing, for the Republicans, something like the Democrats saw in 1968 in Chicago where the party simply tore itself apart in full view of the entire nation on television.”

He connected, “There were riots in the street. There was brutality by the police and all of that.” Schieffer pointed out that the Democrats not only lost in ‘68, but also in ‘72. Continuing the speculative comparison, the journalist reminded viewers of the 49 state loss: “They wind up nominating George McGovern, a good man but someone far outside the mainstream of the Democratic Party and he lost in a historic landslide.”

At that point in 2016, the GOP battle was down to Ted Cruz and Donald Trump. Schieffer concluded, “Well, I don't think it's good either way.” Regarding the 1972 comparison, the journalist mused, “Is this what is shaping up here for the Republicans? I don't know. But I think it's something that we are going to be talking about.” (Spoiler alert: Donald Trump did not lose 49 states. He actually won 30.)

NORAH O’DONNELL: Bob Schieffer is a CBS News contributor. He is our former CBS News correspondent and moderator of Face the Nation. Bob, good morning. 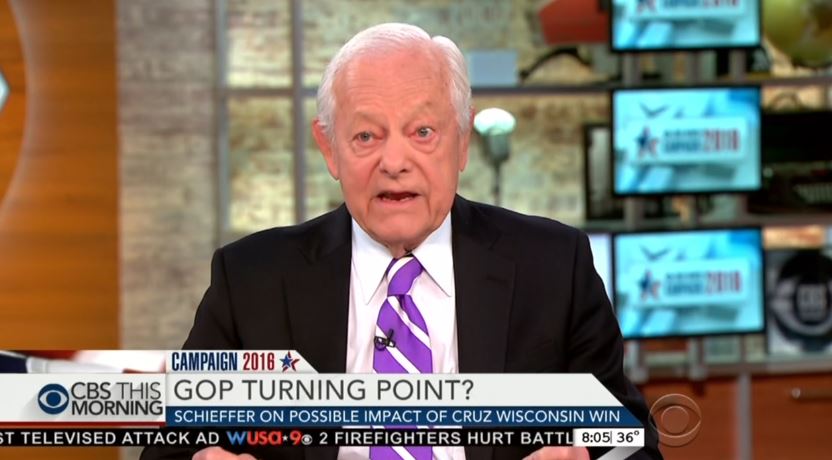 O’DONNELL: So, post-Wisconsin, the headlines today are, you know, trouble for the two front-runners. But do you think it's something more than that?

BOB SCHIEFFER: I think we are seeing something — We may see something more profound happen than just this race. I'm beginning to wonder: Are these political parties going to survive 2016? I mean, I think the Republicans — I mean, I don't know who is going to get this nomination. I don't know if it's going to wind up in Cleveland. If it does, Donald Trump is not going quietly into the night. I think that is one thing we can say for sure. I don't know who is going to get the nomination. But there is going to be a huge fight out there. We may be seeing, for the Republicans, something like the Democrats saw in 1968 in Chicago where the party simply tore itself apart in full view of the entire nation on television. You know, there were riots in the street. There was brutality by the police and all of that. And they not only lost in 1968, they come back in 1972 and they try to institute reforms to correct that. They throw out all of the party leader that year, the big city bosses and all of that. They wind up nominating George McGovern, a good man but someone far outside the mainstream of the Democratic Party and he lost in a historic landslide. Carried only the state of Massachusetts. Is this what is shaping up here for the Republicans? I don't know. But I think it's something that we are going to be talking about.

GAYLE KING: Donald Trump is certainly sending out signals he thinks they are trying to take it away from him. What is more risky, do you think, for the party? Donald Trump as a nominee, where people say they are afraid? Or alienating his supporters?

SCHIEFFER: Well, I don't think it's good either way. I mean, either way you do it. Let's say he runs as a third-party candidate. I don't think he can be elected but I don't think the Republican candidate could be elected either if that is the case. Let's say he is the candidate: I mean, you know? With the numbers he is running up, the negatives he has just among women voters, I think it's going to be very, very difficult for Republicans. But then you go to the other side here and let's talk about the Democrats. I don't think this is their finest hour either as a party. I mean, here you have the party, the oldest party in America has managed to come up with one candidate who is a Democrat and she is having a fight of her life with someone who has never saw office as a Democrat who is an avowed socialist? I think — I don't know.

ROSE: He is likely to stay in, because he has plenty of money and probably wait for event that may or may not happen.

SCHIEFFER: Well, exactly. I mean, you're talking about how long can he stay? He certainly is not embarrassing himself because he is winning. He has plenty of money. And it would be, I would think, no one would blame him for just hanging around to see if Hillary Clinton is going to be indicted. Now, I don't have any evidence that she is or that she isn't. But I do know there is an investigation going on and I think he would be wise to just hang around and see what happens on that. And if that happens, let's say she is indicted, what happens then? I mean, we are in a strange turning point.

KING: For both parties, you’re saying. What role does John Kasich play in this? Because he also says he is staying in to the very end.