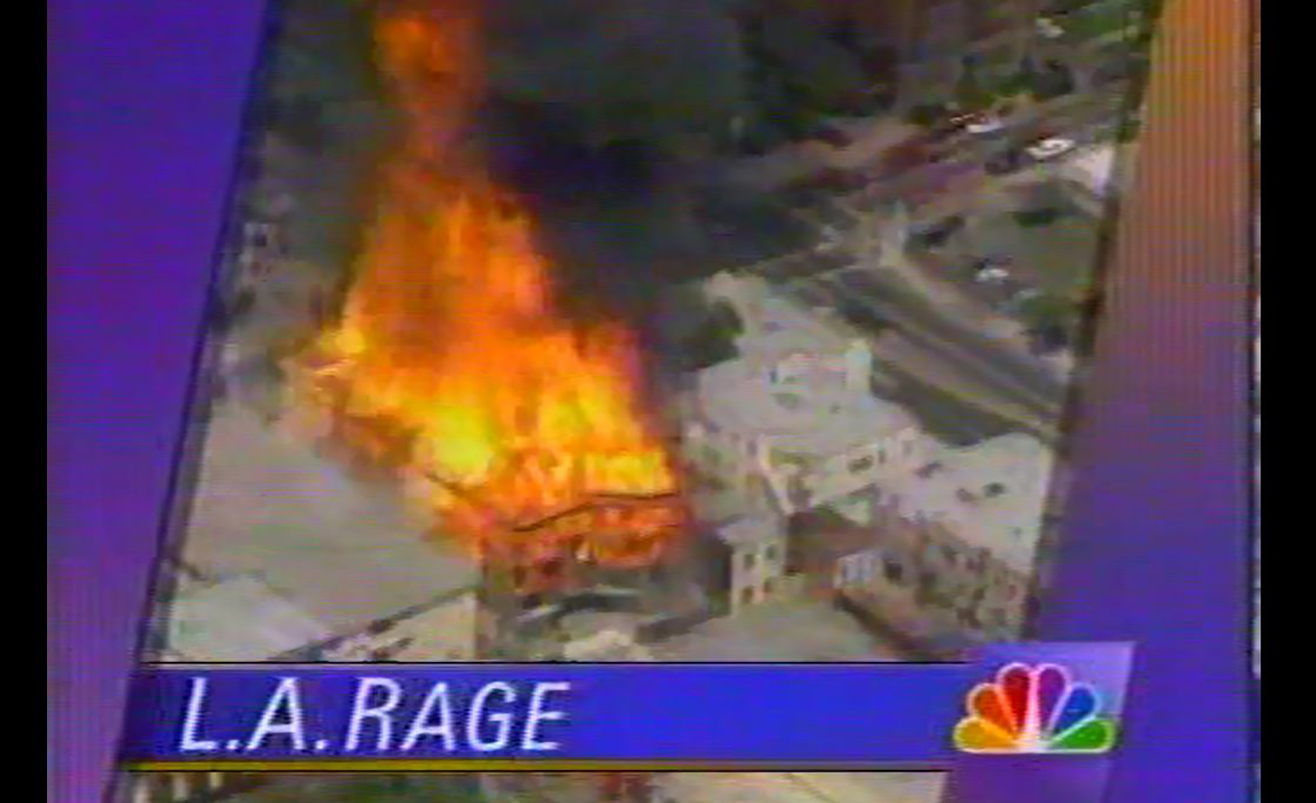 Twenty-five years ago this week, South Central Los Angeles saw six days of rioting that left 58 citizens dead, more than 2,000 injured, and more than $1 billion in property damage. The May and June 1992 editions of the Media Research Center’s MediaWatch newsletter chronicled how liberal journalists wasted little time in using the riots as an excuse to bash conservatives as racist and promote even more government spending.

EXCERPT from an article by MRC’s Brent Baker in the May 1992 MediaWatch:

As South Central Los Angeles went up in flames, reporters didn’t hold the individual perpetrators responsible. Instead, many tried to convince viewers that the rioting was a rational response to the conservative policies of the 1980s. Today’s Bryant Gumbel blamed Ronald Reagan as soon as he could, asserting the morning after rioting began: “We keep looking for some good to come out of this. Maybe it might help in putting race relations on the front burner, after they've been subjugated for so long as a result of the Reagan years.”

That evening, on the April 30 NBC Nightly News, John Chancellor discussed the impact of the ’80s on blacks and whites: “Both groups have been shaped by American politics over the last dozen years. Politicians have fanned these flames with code words about ‘welfare queens,’ ‘equal opportunity,’ and ‘quotas.’ Language designed to turn whites against blacks. With two-party politics that favored the rich and hurt everyone else.” 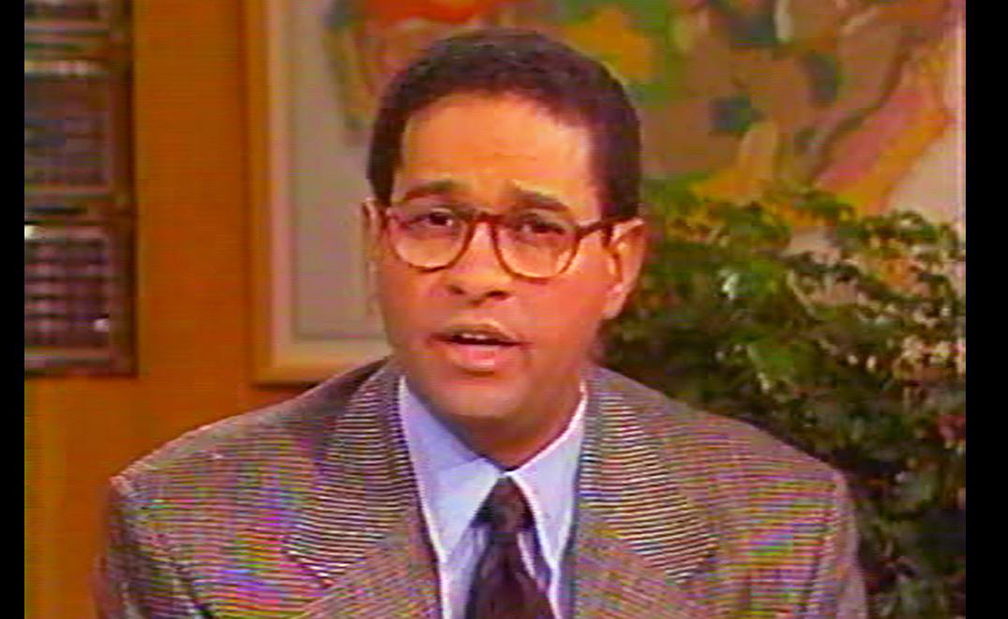 The next morning on Today, Gumbel claimed the violence was “fueled by the frustration and anger that accompanies feelings of inequality and despair.” Gumbel also blamed the rest of the country: “Taking their cues from Washington, most Americans over the past dozen years have chosen to ignore the issue of civil rights, and the growing signs of racial division.”

On C-SPAN’s May 1 Journalists’ Roundtable, Philadelphia Inquirer Washington reporter Alexis Moore agreed: “Somebody who is in elected office ought to have enough guts to say, ‘I know I may lose the election, but this is the result of the past ten, twelve, fifteen years of neglect, this is the result of putting selfish [sic] and greed ahead of the needs of us all.’”

Moore insisted tensions “have been cynically exploited by the past two Presidents” who have “encouraged not only misbehavior by police officers, but misbehavior by people in higher office. When you allow those who are supposed to be protecting the law to break it, when you ignore people with briefcases stealing millions and millions of dollars in the form of the S&Ls, when you pretend that Iran-Contra really didn’t happen, you are encouraging people to do anything they want to do as long as it benefits them.”

USA Today reporter Richard Wolf blamed it all on a four-year-old television ad: “We mentioned Willie Horton earlier. That kind of ad obviously plays into this whole situation. When you have such a calculus going on in the political community about how to set one group against another, you can actually exacerbate racist feelings.” 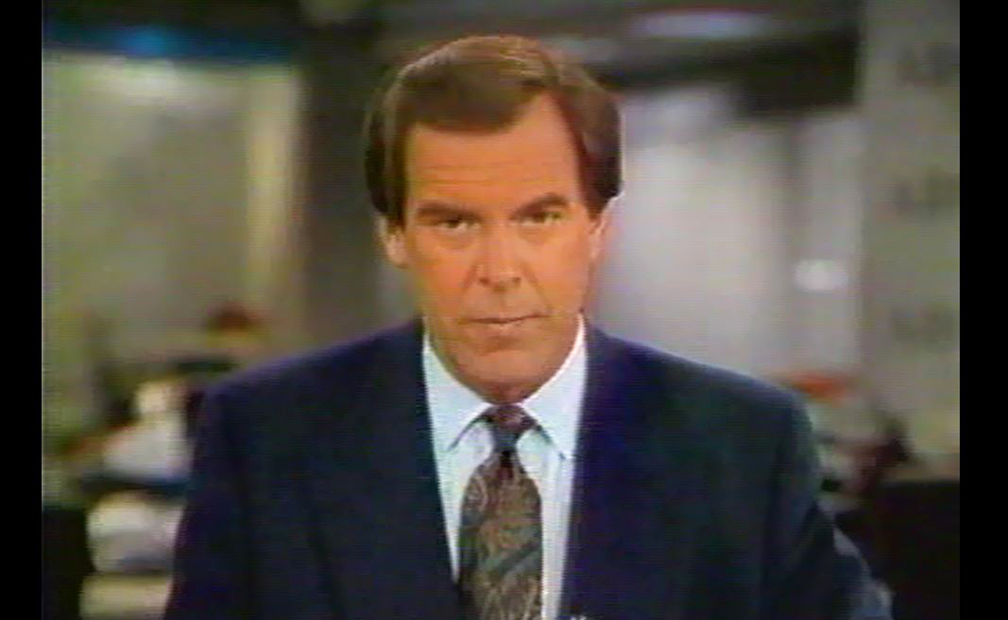 “What effect did the Reagan-Bush, then the Bush years, have on the lives of black Americans?” [ABC’s World News Tonight anchor] Peter Jennings asked on May 4. “It won’t be easy for the Democrats to argue that it’s simply a matter of spending the right amount of money,” he added, but the following stories did just that.

Using numbers from the liberal Center for Budget & Policy Priorities, [ABC News correspondent] Rebecca Chase argued that during the 1980s: “While the numbers on welfare increased, the value of the assistance fell by more than 30 percent. During the same time, other federal spending in the cities also dropped. Subsidized housing fell 82 percent. Job training, 63 percent. And programs to develop new business, down 40 percent.”

ABC failed to consider the argument that welfare spending has encouraged dependency. As to ABC’s claims, The Washington Post noted on May 6 that federal spending on income security programs has jumped in constant 1991 dollars from $125 billion in the late 1970s to nearly $175 billion this year. Spending on immunization programs have grown from $32 million in 1980 to $186 million in 1990. And in the ’80s, the percent of black families with real incomes over $50,000 jumped from 8.2 to 13.2 percent, while those under $15,000 fell from 40 to 38 percent.

What legacy will the media assign to the L.A. rioting? Well, on the May 6 Today, Katie Couric asked Pat Buchanan: “Many are afraid the L.A. riots are going to be the ‘Willie Horton’ of this campaign. Are you afraid they’re going to have a very divisive effect? Does that concern you or are you playing that up?”

EXCERPT from an article by MRC’s Tim Graham in the June 1992 MediaWatch:

On May 4, Bush spokesman Marlin Fitzwater declared “We believe that many of the root problems that have resulted in inner-city difficulties were started in the ’60s and ’70s, and they [social programs] failed.” Fitzwater’s remarks drew a quick response from liberals. Did the media give equal weight to both sides?

To determine the tone and tilt of the networks’ reaction, MediaWatch analysts watched every evening news story in May (from ABC’s World News Tonight, CBS Evening News, CNN’s World News, and NBC Nightly News) on the impact on federal social programs. In 29 news stories, defenders of Great Society programs and advocates for more federal spending outnumbered critics, 79 to 22, or roughly four to one. Thirteen stories aired pro-Great Society sources with zero critics.

Foreman ended by making the riots sound like a Clinton rally: “Increasingly, people are saying that all of the violence had very little to do with Rodney King. Instead, it was the desperate call of a community fighting for change.”...

“We keep looking for some good to come out of this. Maybe it might help in putting race relations on the front burner, after they’ve been subjugated for so long as a result of the Reagan years.”
— Bryant Gumbel, April 30, 1992 Today.

“We should avoid focusing exclusively on the rage and inappropriate behavior of oppressed and frustrated people who started these riots.”
— Co-host Hugh Downs on ABC’s 20/20, May 1, 1992.

“Bush does not have a great civil rights track record with many black Americans, beginning with the use of the controversial Willie Horton ads in the ’88 campaign, through his initial veto of civil rights legislation. Mr. Bush will now have a long way to go to convince skeptical blacks that he is concerned about the way America’s criminal justice system treats them.”
— CBS reporter Randall Pinkston, May 1, 1992 CBS This Morning.

“This is a war within, and it seems to be calling for leadership of Lincolnesque dimensions, and I don’t think George Bush is capable of it, since he has exploited the racial divisions in this country for a dozen years to further his political career... We ought to pay attention to people that we have neglected through a dozen years of Republican policies that have ignored the domestic agenda.”
— Newsweek reporter Eleanor Clift on The McLaughlin Group, May 2, 1992.

“The inevitable legacy of the Bush and Reagan years has announced itself in Los Angeles....There is a direct connection between the moral vacuity and coy racism of the Willie Horton President and the verdict of the Simi Valley jury. There is a cause and effect relationship between the greed and indifference of the voodoo-economics presidencies — both of them — and the accelerating disintegration of life in the cities that has fueled violent protest and mindless crime.”
— Boston Globe editorial writer Randolph Ryan, May 3, 1992. 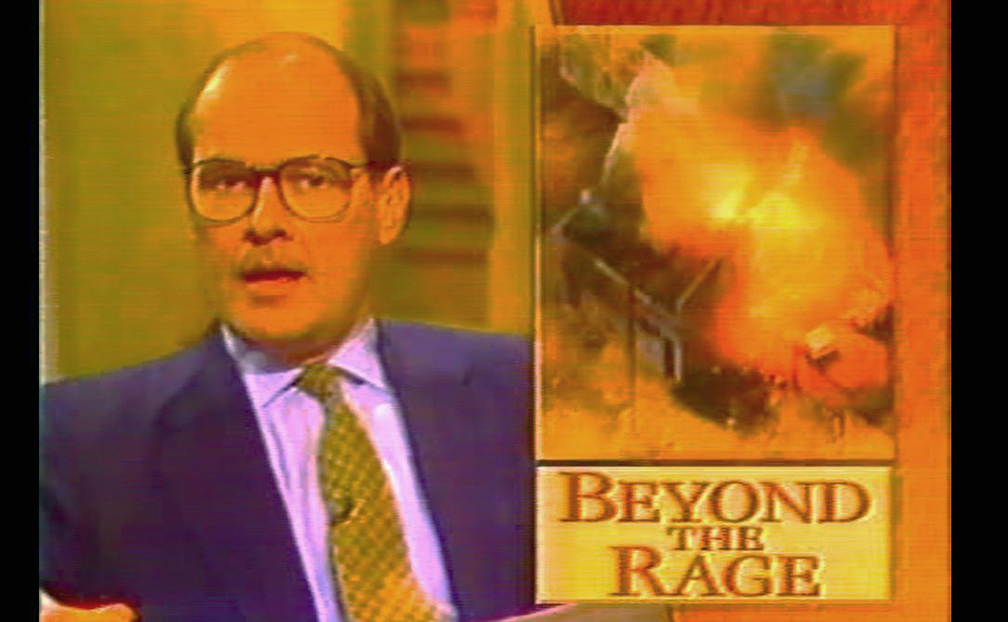 “If you are like most Americans, you figured you were lucky that it couldn’t happen in your town. Well, you might want to think again. America was shocked and appalled by the violence and riots in Los Angeles last week. But what we saw was not an aberration... Imagine a day when it’s true in every American city. Impossible, you say? Wait, and you’ll see what happens.”
— CBS This Morning co-host Harry Smith, May 4, 1992 commentary.

“Presidential candidate Pat Buchanan calls those who hit the streets ‘looters and lynchers.’ President Bush calls them criminals. I call them freedom fighters....I not only accept the rebellions in Los Angeles, I identify with them.”
— USA Today contributor Julianne Malveaux in a May 10, 1992 San Francisco Examiner column.

“[NBC’s Bryant] Gumbel opposed the violent reaction, but would not condemn it. ‘Everyone is quick to want you to condemn them but some of us that are sitting in this position feel uncomfortable being asked to do that,’ he said. ‘When the violence was being perpetrated on these people on an ongoing basis, did America see it? Certainly not,’ he said. ‘Black people are being killed by the handfuls in that area on an ongoing basis, and basically America doesn’t care.’”
— Story by Knight-Ridder reporter Marc Gunther, May 13.

“We hold accountable Republicans who have savaged our urban schools, our housing, our health care, our social services. We hold accountable Democrats who have collaborated in this butchery...We hold accountable those who waste our billions on a military with no enemy to fight.”
— Osborn Elliott, Newsweek editor-in-chief from 1961-76, in his speech as co-chairman of the “Save Our Cities” rally, May 16, 1992.