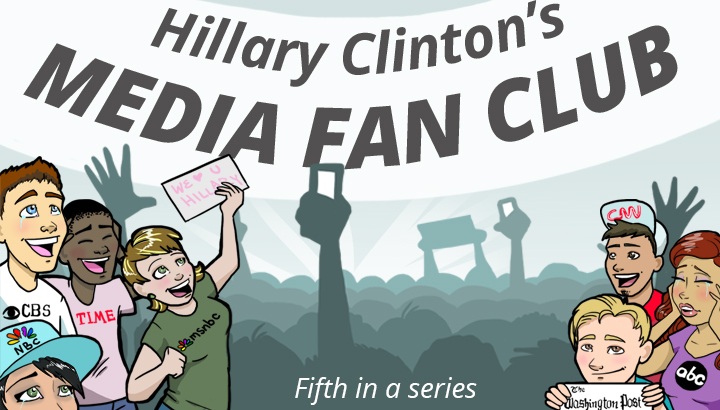 NewsBusters is continuing to document the news media’s role in enabling Hillary Clinton’s political career, showing how reporters showered were with positive news coverage while they savaged her opponents. Today, ten examples representing the softball treatment Hillary has received in TV interviews over the years.

Here are the links to previous installments; the series will continue to run every other weekday until Friday, July 15. (Links to rest of report added below).

(As always, thanks to MRC’s Mike Ciandella for tracking down the available TV clips; the full set of quotes follows the video compilation.) 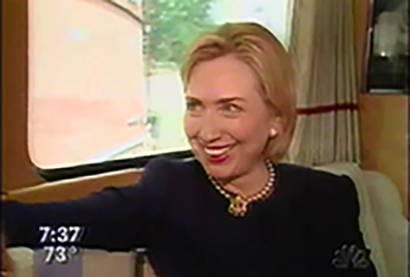 ■ “I’ve talked to several people and they came up and said, you know, ‘She’s so different than I thought she would be. She’s so much more of a people person. She’s funny, she’s nice.’ Do you think that people, like, don’t get you? I mean, you get out there and people see a different side of you.”
— NBC’s Maria Shriver to Hillary Clinton, July 16, 1998 Today.

■ “A lot of the women that I meet from traveling overseas are very impressed by you and admire your dignity. A lot of the people you meet are people who’ve suffered, people you saw today, and who believe that they identify with you, because they have seen you suffer.”
— CNN’s Christiane Amanpour to Hillary Clinton in Macedonia after a tour of refugee camps, May 14, 1999. 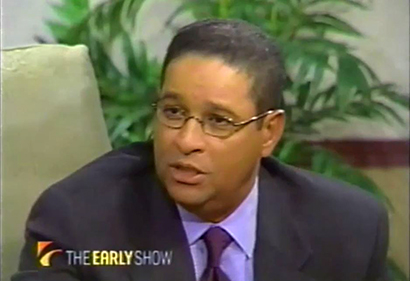 ■ “You became First Lady like no other First Lady before you. You had your own interests, you got involved in public policy. No First Lady had done that without being severely criticized. Did you realize what you were getting into?”
“I don’t think people realize how strong your faith is.”
— Questions Barbara Walters posed to Hillary Clinton in a June 8, 2003 ABC special promoting her book, Living History.

■ “Do you actually like campaigning?...I mean, people literally want to shake your hand....I asked the Senator if she’s better in person than on television. She says it’s what everybody tells her....You must scratch your head sometimes, though. I mean, either you’re too liberal, you’re not liberal enough....If you could pick an adjective that you hope people would use to describe you, what would it be?”
— Some of co-anchor Cynthia McFadden’s questions to Hillary Clinton, from a September 7, 2006 profile on ABC’s Nightline. 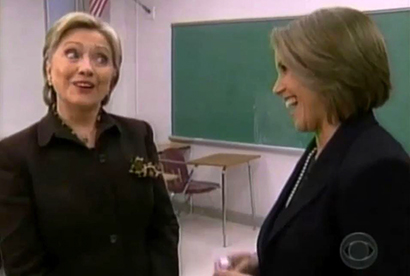 ■ CBS’s Katie Couric: “What were you like in high school? Were you the girl in the front row taking meticulous notes and always raising your hand?...Someone told me your nickname in school was ‘Miss Frigidaire.’ Is that true?”
Clinton: “Only with some boys.”
Couric, giggling: “I don’t know if I want to hear the back story on that!”
Clinton: “Well, you wouldn’t want to know the boys either.” [bursts out laughing]
— CBS’s 60 Minutes, February 10, 2008.

■ Ex-Secretary of State Hillary Clinton: “The ‘fascinating’ list has always been, you know, a particular interest of mine — and then, to be on it was an incredible honor.”
Retiring host Barbara Walters: “Well, you were our most fascinating....I think you’ve been on our ‘most fascinating’ list more than anyone, and — and you were THE most fascinating....No matter what their political views, you are someone we admire — and, for me, it’s more than admiration — it’s very deep affection, and I thank you for coming on....No matter what she does, she will always, to me, be the most fascinating.”
— Exchange on Walters’ last day as co-host of ABC’s The View, May 16, 2014. 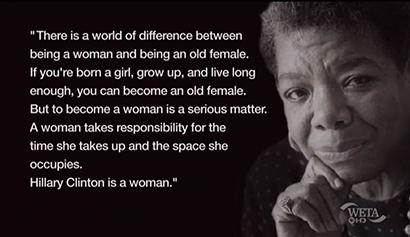 ■ “Few people have spent the past 20 years in the public eye as much as she has....Maya Angelou, the late Maya Angelou wrote a poem about her during the 2008 presidential campaign. It contains these lines: ‘There is a world of difference between being a woman and a being an old female. If you’re born a girl, grow up, and live long enough, you can become an old female. But to become a woman is a serious matter. A woman takes responsibility for the time she takes up and the space she occupies. Hillary Clinton is a woman.’ Some say she may be the first woman in the White House. I am pleased to have Hillary Clinton back at this table. Welcome.”
— Host Charlie Rose setting up an interview with Clinton on his eponymous PBS program, July 17, 2014.

■ “I want to know, in your most private of moments, is there ever an instance when you ask yourself, ‘Why am I doing this again?’... Is your mother’s voice in your ear and, if so, give me the one line that you repeat to yourself?”
— Anchor David Muir to Clinton on ABC’s World News Tonight, September 8, 2015.

■ “We went into the GMA vault and found your first appearance here on Good Morning America in 1988....You were speaking out about — you’re a lawyer and talking about equality and such....For as long as we can remember and seeing you in the spotlight, and you have been fighting for others.”
— Co-host Robin Roberts to Clinton at a town hall event on ABC’s Good Morning America, April 21, 2016.