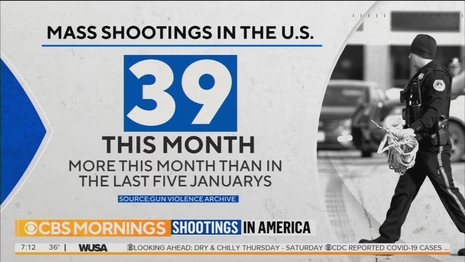 Since the mass shooting in Monterey Park, California on Saturday, viewers of English and Spanish broadcast networks have seen the reported number of mass shootings in the United States jump from 33 to 39 in just three days. And as CBS Morning’s co-host Nate Burleson put it on Tuesday, “my logic says that has to be wrong, those numbers have to be exaggerated, and they are not.” But Burleson should’ve listened to his logic because his instinct was correct. Yet, these networks have also ignored a recent study that shows an average of 1.67 million defensive gun uses per year.

In the last three days, the liberal broadcast networks and Spanish-language networks have cited the anti-gun Gun Violence Archive (GVA) 20 times. From Sunday morning to Tuesday morning (January 22-24) the broadcast networks (ABC, CBS, and NBC) cited the Gun Violence Archive 9 times during their morning and evening flagship newscasts. Telemundo and Univision cited GVA 11 times (including on their noon and late-night newscasts).

But as NewsBusters reported last year, Gun Violence Archive was not to be trusted because they inflate their numbers with an overly broad definition of mass shootings that doesn’t take into account certain facts like motive, location, type of crime, and the shooter. Even respected mass killings researchers don’t trust GVA’s numbers because they make most incidents look like public massacres.

James Alan Fox, a mass killings researcher with Northeastern University with over 40 years of experience and who maintains a similar database for the Associated Press and USA Today, has said the data GVA puts out is “confusing to people.” “On average, there’s one person killed per case. Like half of the cases, no one gets killed. And three-quarters, it’s either none or one,” he noted of GVA’s numbers.

While the networks parroted the supposed 39 mass shootings statistic for 2023, many also noted how GVA claimed there were 647 in 2022. Fox blamed GVA for creating an “exaggerated view of the risk” of mass shootings:

The kind of shootings that people really think about the public massacres – on average, there are about a half-dozen a year. In 2018, there were 10. And in 2019, I believe there were nine … in a population of 330 million people, you certainly can’t call the actions of 9 or 10 people an epidemic. It’s still a rare event. Juxtapose that with the fact that ‘oh, there’s over 600 mass shootings last year,’ according to the Gun Violence Archive, that’s where people get the exaggerated view of the risk.

And for an example of the liberal media using GVA’s numbers to stoke that exaggerated fear, we return to CBS’s dubious reporting. 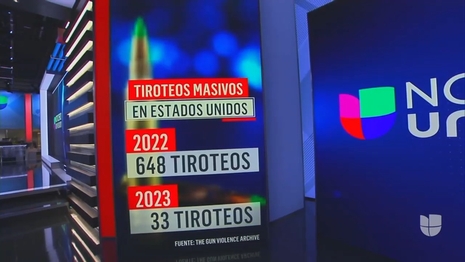 King and co-host Tony Dokoupil took up an anti-American stance; the former recalled her friend in Brazil telling her “You live in the United States of America. You guys kill people all the time,” and the later decried private gun ownership as a “uniquely American problem.”

Stephen Gutowski, the founder of The Reload, told NewsBusters last year that GVA uses a definition for mass shootings “popularized by gun-control activists on Reddit” which “increases the number of mass shootings by a factor of ten or more.” He added that the definition was “misleading for most readers since many of the mass shootings [they count] are not similar to high-profile shootings like Sandy Hook, Las Vegas, or Parkland.”

While the liberal media is intent on trampling on the right of law-abiding citizens to keep and bear arms with false statistics on mass shootings, they’re flat-out ignoring an academic study from Georgetown University that shows “guns are used defensively by firearms owners in approximately 1.67 million incidents per year.”

Professor William English boasted to The Reload that his study was “the largest survey of gun owners ever conducted, providing more statistical power than earlier surveys and much more information about the demographics of gun ownership and use,” including “the details of defensive gun uses, and frequency of defensive carry of handguns.”