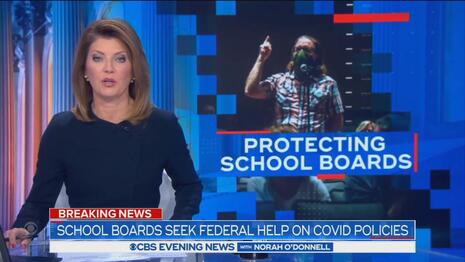 Over the weekend, a group of parents gathered outside the Department of Justice to protest the suggestion that parents outraged at radical leftist school boards were domestic terrorists. They stayed on message against schools poisoning kids with Critical Race Theory and apparent pornography in school books. Meanwhile, the evening newscasts of ABC, CBS, and NBC kept silent on the rally as the networks previously backed the smear or remained silent on the topic.

In later September and early October, CBS Evening News and NBC’s Today show hyped a demand from the radical leftist National School Boards Association (NSBA) that demanded concerned parents protesting at school board meetings be declared domestic terrorists and have the terrible power of the federal government brought to bear against them.

“Threats to school boards. Tonight the stunning request asking for help from the FBI to crack down on unruly behavior from parents because of COVID rules,” CBS anchor Norah O’Donnell said in her opening tease. Later adding: “Well, tonight, the National School Board[s] [sic] Association is taking extraordinary action, sending an SOS to the White House and law enforcement.”

Over on NBC, co-anchor Savanna Guthrie said the NSBA had issued a “Cry for help. A shocking turn in the fight over vaccine and mask mandates in school.” Of course, she downplayed the parental outrage at the disturbing and racist content being shown to their children.

And then the following week, after the DOJ announced they would start targeting those parents with their counterterrorism assets (essentially attempting to intimidate them into shutting up), CBS and NBC (along with ABC) ignored the pushback from parents; leaving it up to Fox News Channel.

“Breaking tonight, the increasing pushback against the Biden administration over its efforts to stifle dissent on the part of parents against school boards disregarding their wishes over the children's education,” Special Report fill-in anchor Mike Emanuel announced that evening.

The only parental protest the networks covered on Monday was the California protests over COVID vaccine mandates. Of course, CBS wanted to make them look bad, so they spoke to ONE woman who falsely claimed the vaccines had “antifreeze” and “formaldehyde” in them.

As for what actually happened at the weekend rally, we look to Daily Caller education reporter Kendall Tietz. “Frustration at school boards boiled over for some parents and activists who protested outside of the Department of Justice building in Washington, D.C. Sunday,” she reported.

Adding: “A small crowd gathered for the ‘Parents Are Not ‘Domestic Terrorists’ Rally,’ a reference to Merrick Garland’s Oct. 4 memorandum that called on the FBI to “use its authority” in response to the ‘disturbing spike in harassment, intimidation, and threats of violence against school administrators, board members, teachers, and staff.’”

The report is also crammed with comments from rally attendees.

The networks have also failed to tell their audiences how the Pennsylvania School Boards Association (PSBA) had decided to cut ties with the NSBA over their discussing letter smearing parents. "In a letter to its members, PSBA said the group vote[d] unanimously to leave the national association due to a long list of issues with the group, the most recent of which was a controversial letter to President Biden," reported The Hill's breaking news reporter, Lexi Lonas.

Last week, the networks also blacked out angry parents in Loudoun County, Virginia who had confronted their radical leftist school board for covering up alleged rapes by a “gender fluid” boy so they could pass a transgender bathroom policy. This has remained untouched by the networks and liberal cable outlets.

This refusal to show parents standing up to intimidation tactic by the Department of Justice on Monday was made possible because of lucrative sponsorships from Fisher Investment on ABC, Nutrisystem on CBS, and Amazon on NBC.