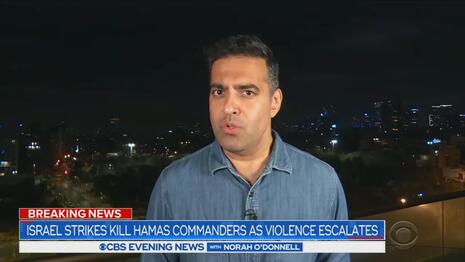 This week, a five-year-old boy in Sderot, Israel was killed after a Hamas rocket broke through the Iron Dome defense system and blew up his family’s house. His death went unreported on the CBS Evening News that night, even after NewsBusters called them out on Tuesday for underreporting Israeli casualties. On top of that, none of the broadcast networks (ABC, CBS, or NBC) retracted their false reporting sourced by Hamas that Israel had killed nine Palestinian children with their airstrikes.

Over the last few days, a humanitarian organization called Defense for Children International Palestine had been sifting through reports of dead children and found that several had been killed by Hamas rockets that had fallen short, landing in Gaza.

But those facts didn’t matter to CBS foreign correspondent Imtiaz Tyab, who opened up his Wednesday report by decrying Israel’s right to defend itself by targeting Hamas installations.

“Israel's air power on full display as Gaza's tallest building turned to rubble in an instant,” he huffed. “It followed yet another day of it, tit-for-tat attacks where Hamas fires its crude rockets indiscriminately into Israeli territory, only to be met with the full force of Israel's sophisticated weaponry.”

Tyab’s whining hinted at the ridiculous argument of a “disproportionate” response terrorist apologists like to throw out there to decry Israel’s defense of its people. And what Tyab failed to admit to viewers was that the building was important to Hamas.

On NBC Nightly News, correspondent Molly Hunter described Israel’s efforts to make sure civilians were not around when the airstrike leveled it:

This 14-story building in Gaza crashing to the ground after an Israeli airstrike. First Israel fired warning shots. The building had been evacuated. Inside, media offices including a TV station run by the militant group Hamas.

Though she did admit that fact, Hunter continued to push casualty numbers sourced by Hamas-linkedt groups in Gaza. It was the same with ABC correspondent Matt Gutman on World News Tonight.

And in ignoring the growing casualties in Israel, Tyab vaguely proclaimed: “The death toll is rising on both sides with civilians caught in the middle.”

Meanwhile, Gutman walked through an incinerated part of a town south of Tel Aviv. “A woman was killed in this house,” he said while surrounded by burnt-out cars and rubble. “A 6-year-old killed in a rocket attack today. One of at least seven Israeli fatalities. More than 150 wounded so far.”

Further, Tyab blamed Jews for the waves of violence in multiple Israeli towns throughout the country. “A different terror is also unfolding across Israel. Here in Bat Yam, an Arab-Israeli man is beaten by a mob of Jewish Israelis,” he chided.

But back in reality, this was the first time CBS had reported on such attacks which started earlier in the week by Arab-Israelis in places like Lod, whose mayor had warned that they had lost control. “…while in other places like Lod and Acre it’s neighbor versus neighbor, attacking each other's homes, businesses, and places of worship,” Tyab added.

Both Gutman and Hunter also noted the attack on the Arab-Israeli man but did not tell viewers about the attacks against Jews in Lod and Acre.

CBS’s cover for Hamas’s terrorism was made possible because of lucrative sponsorships from Ford Motor Company and Purina. Their contact information is linked so you can tell them about the biased news they fund. CBS Evening News has also asked people to text anchor Norah O’Donnell at this number: (202) 217-1107.

NORAH O’DONNELL: All right. Tonight, there is no letup in the worst fighting between the Israelis and Palestinians in years. President Biden spoke by phone today with Israeli Prime Minister Netanyahu and later said Israel does have a right to protect itself. The U.S. is also sending an envoy to try to work without a cease-fire. CBS's Imtiaz Tyab reports tonight from Tel Aviv.

IMTIAZ TYAB: Israel's air power on full display as Gaza's tallest building turned to rubble in an instant. It followed yet another day of it, it-for-tat attacks where Hamas fires its crude rockets indiscriminately into Israeli territory, only to be met with the full force of Israel's sophisticated weaponry.

The death toll is rising on both sides with civilians caught in the middle, like Feras Al Ghul.

You must be terrified.

FERAS AL GHUL: It is.

TYAB: Originally from Dallas, he is trapped inside Gaza with his pregnant wife.

AL GHUL: Deep down, you know, she wants what's best for me.

TYAB: Was that an airstrike?

AL GHUL: That is an airstrike.

A different terror is also unfolding across Israel. Here in Bat Yam, an Arab-Israeli man is beaten by a mob of Jewish Israelis, while in other places like Lod and Acre it’s neighbor versus neighbor, attacking each other's homes, businesses, and places of worship. This rabbi calls the situation a nightmare. Huge numbers of security forces have been sent to secure the towns and curfews are now in effect.

Prime Minister Benjamin Netanyahu has said he'd restore peace back to these Israeli towns with a, quote, "Iron fist," if he has to, but bringing these fractured communities back together again will no doubt require a much softer touch. Norah.