CBS, NBC Telegraph Intent to Only Be Favorable to Biden’s VP Pick 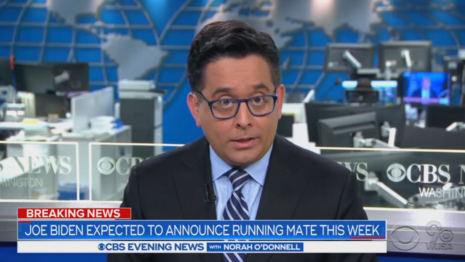 In a pair of doting news reports from the CBS Evening News and NBC Nightly News on Monday, both of these defenders of Joe Biden tacitly admitted to viewers that they planned to only cover his pick for running mate favorably; refusing to be critical or vet them. They also suggested that being critical would be sexist and racist.

The most blatant admission came from CBS political correspondent Ed O’Keefe, who awkwardly ended his pro-Biden segment by noting: “As we await Biden's choice several women's rights leaders are calling on news organizations to ensure fair coverage of whoever she is. They call for, quote, ‘a new way of think about your role in how she is treated and the equality she deserves.’”

As he read the quote, O’Keefe had a smile on his face and spoke in a tone that betrayed their intent to follow the order.

This collective of leftist organizations was the subject of a front-page report in Sunday’s Washington Post. According to the paper, “The groups are also focusing on bias from influencers, including the media, and issued a guide on Friday, advising how to avoid amplifying sexism and racism in news coverage.”

The paper provided a link to UltraViolet’s guide for journalists, where they instructed reporters to not cover supposed “disinformation” about a candidate.

O’Keefe also noted that Biden had received a letter demanding he pick a black woman.

Over on NBC, chief foreign affairs correspondent and Democrat establishment fan girl Andre Mitchell touted those leftist women’s groups. “Now, women's groups are vowing to defend Biden's running mate against sexism, such as a column comparing the selection process to an episode of The Bachelor,” she said.

“The discrimination, the stuff that’s out there on the internet, the attacks we’ve seen. So, that's what they are doing, they are anticipating this. And I think it's a good idea,” Sen. Amy Klobuchar told Mitchell in a soundbite.

Mitchell also boasted that “The campaign is also ready to combat racist attacks if Biden chooses a black woman.”

Of course, the implicit suggestion from these networks and the leftist women’s groups was that any criticism or vetting of Biden’s pick was coming from a sexist and racist place. And given their penchant for defending their presidential candidate from himself, it meant they would be extending that protection to their entire ticket.

This telegraph of intent to be bias was made possible because of lucrative sponsorships from Consumer Cellular on CBS and Fisher Investments on NBC. Their contact information is linked if you want to let them know about what they’re funding. CBS Evening News has also asked people to “text” anchor Norah O’Donnell at this number: (202) 217-1107.

MARGARET BRENNAN: The Democratic Party convention is set to start one week from today. Our new CBS News Battleground Poll shows President Trump trailing Joe Biden by six points in Pennsylvania and Wisconsin; two of the key 2016 swing states that helped vault Mr. Trump into the White House. This as Biden is expected to announce his pick for running mate this week. Here's CBS's Ed O’Keefe.

ED O’KEEFE: Joe Biden returned to his residence in Wilmington, Delaware today after spending the weekend at his secretary home in Rehoboth Beach and teasing a potential announcement.

O’KEEFE: So far, Biden’s only known face-to-face meeting with a contender was with Michigan Governor Gretchen Whitmer who made a quick round trip to see Biden last week.

O’KEEFE: CBS News is told that several others including former National Security Adviser Susan Rice, spotted Sunday in Washington, have been on standby for a potential interview since the end of last week.

In addition to Rice, Biden’s potential choices include about a dozen mayors, governors, and lawmakers.

And as Biden ponders his choice, today he received a stark warning from more than 100 politically active black male leaders, including civil rights attorney Benjamin Crump, rapper Sean “Diddy” Combs, and former Obama administration official Van Jones. “Failure to select a black woman in 2020 means you will lose the election.”

Whoever he picks, Biden’s decision matters to voters not currently battling him in battleground Pennsylvania. Seven in ten of those who say they could consider supporting Biden say his VP choice is important.

As we await Biden's choice several women's rights leaders are calling on news organizations to ensure fair coverage of whoever she is. They call for, quote, “a new way of think about your role in how she is treated and the equality she deserves.” Margaret.

LESTER HOLT: And tonight, with just a week to go until the start of the Democratic National Convention, the clock is ticking for former Vice President Joe Biden to announce his running mate. Andrea Mitchell now, with the latest.

ANDREA MITCHELL: Pressure mounting on Joe Biden to decide on his running mate and to choose a black woman.

MITCHELL: His announcement will be digital followed by a biographical video of his pick and a joint appearance. The campaign says all the major contenders have had in-person interviews, including Michigan Governor Gretchen Whitmore, who flew in secretly a week ago. Others are Senator Kamala Harris, former National Security Adviser Susan Rice, Senators Tammy Duckworth and Elizabeth Warren, and Congresswomen Karen Bass and Val Demings.

Now, women's groups are vowing to defend Biden's running mate against sexism, such as a column comparing the selection process to an episode of The Bachelor.

SEN. AMY KLOBUCHAR (D-MN): The discrimination, the stuff that’s out there on the internet, the attacks we’ve seen. So, that's what they are doing, they are anticipating this. And I think it's a good idea.

Joining an appeal from black women.

REP. BARBARA LEE (D-CA): This is the moment that we need to make sure that the issues around racism, sexism, equality, racial justice, income inequality is addressed in a magnificent, deep way.

MITCHELL: The longer Biden waits passed his self-imposed deadline, the more infighting among supporters of some of the candidates, another reason to decide soon. Lester?