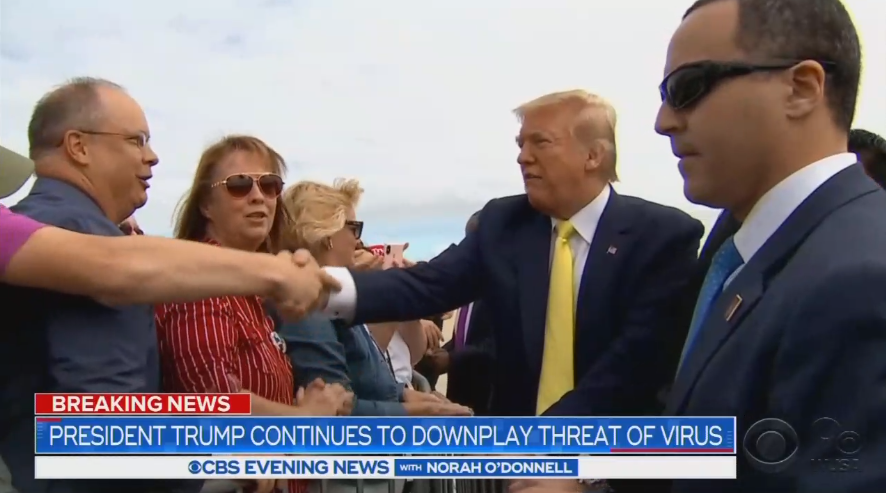 Despite the fact that President Trump was a self-proclaimed germophobe and his hygiene habits had been the target of liberal media ridicule, CBS White House correspondent Paula Reid spent part of her Monday segment on the CBS Evening News insisting the President was being far from hygienic during the coronavirus (COVID-19 or Wuhan Virus) outbreak. On top of that, they again knocked him for not canceling his campaign rallies.

After claiming Trump “refused to take questions” from the press (he was several yards away and appeared to be walking to the West Wing while speaking to staff, and was giving a press conference during the report), Reid decried how he was continuing “to downplay the global epidemic, accusing Democrats and the media of trying to inflame coronavirus situation.”

What she was referring too was Trump sharing statistics showing that the flu season was much worse than the coronavirus outbreak, something even health professionals had admitted.

That was followed by a snide comment about how Trump was supposedly “publicly defying government recommendations on hygiene.” As she said that, a video of Trump shaking hands with supporters flashed on the screen. It was followed up with a soundbite of immunologist Dr. Anthony Fauci from NIH speaking about the importance of washing your hands. The obvious implication was that Trump doesn’t do that.

While Reid was trying to paint a false picture of the President, a mocking Politico article from 2019 dubbing the Trump years “the Purell presidency.”

“And the first thing he often tells his body man upon entering the Beast after shaking countless hands at campaign events: ‘Give me the stuff’ — an immediate squirt of Purell,” Daniel Lippman wrote at the time, before adding: “Two and a half years into his term, President Donald Trump is solidifying his standing as the most germ-conscious man to ever lead the free world.”

The Politico article also included tales of Trump kicking coughers out of rooms and smacking hands when a person licked their finger to flip a page.

Reid’s focus on Trump’s hygiene was followed up with the revelation that four GOP lawmakers who attended CPAC may have contracted the virus and were now in self-quarantine, two of whom had contact with the President since:

The contact occurred at a conservative convention in Washington less than two weeks ago. One, Georgia's Doug Collins, can be seen here with the President on Friday. And Florida's Matt Gaetz traveled on Air Force One with the President just today and announced his self-quarantine roughly an hour after landing.

Toward the end of the segment, Reid chided how a Women for Trump tour was canceled but the President’s campaign events were not. “The tour has now been delayed even as the President has yet to curtail his own campaign travel,” she said.

It was several minutes before CBS admitted that neither former Vice President Joe Biden nor Senator Bernie Sanders (I-VT) had stopped campaigning or shaking hands.

NORAH O’DONNELL: And as the crisis deepens tonight, President Trump is huddling with top advisers, working on a response to the outbreak. This, as the President comes under criticism for spending time golfing at his Mar-a-Lago property over the weekend. Paula Reid reports tonight from the White House.

PAULA REID: As he returned to the White House this afternoon, President Trump waved but refused to take questions. Though on Twitter, he continues to downplay the global epidemic, accusing Democrats and the media of trying to inflame coronavirus situation. That directly contradicts members of his own administration.

SECRETARY ALEX AZAR: Make no mistake, this is a very serious health problem.

DR. ANTHONY FAUCI: It sounds simplistic, but it's true. Washing of hands.

REID: And now, CBS News has learned the President may have been exposed to the virus himself. At least four members of Congress have decided to self-quarantine after coming into contact with a person who tested positive for COVID-19.

The contact occurred at a conservative convention in Washington less than two weeks ago. One, Georgia's Doug Collins, can be seen here with the President on Friday. And Florida's Matt Gaetz traveled on Air Force One with the President just today and announced his self-quarantine roughly an hour after landing. Gaetz made fun of the coronavirus response last week when he wore a biohazard mask on the House floor.

Matt Schlapp, who oversaw the conservative convention, is also in self-quarantine. His wife, Mercedes, was expected to be part of a women for Trump bus tour with the President's daughter-in-law. The tour has now been delayed even as the President has yet to curtail his own campaign travel.

O’DONNELL: And Paula joins us from the White House. Paula, as you mention, the President hasn't curtailed his own campaign schedule, but has anything changed at the White House complex itself?

REID: Well, CBS News has learned that the White House is discouraging foreign officials from visiting. Instead, trying to do meetings over the phone or in teleconference. Now right now, President Trump is briefing reporters, and he says tomorrow he will head to Capitol Hill to meet with Republicans to discuss a possible payroll tax cut and also possibly some relief for hourly wage earners. Norah?