Nets Insist Trump Tweets 'Testing the Independence' of the DOJ 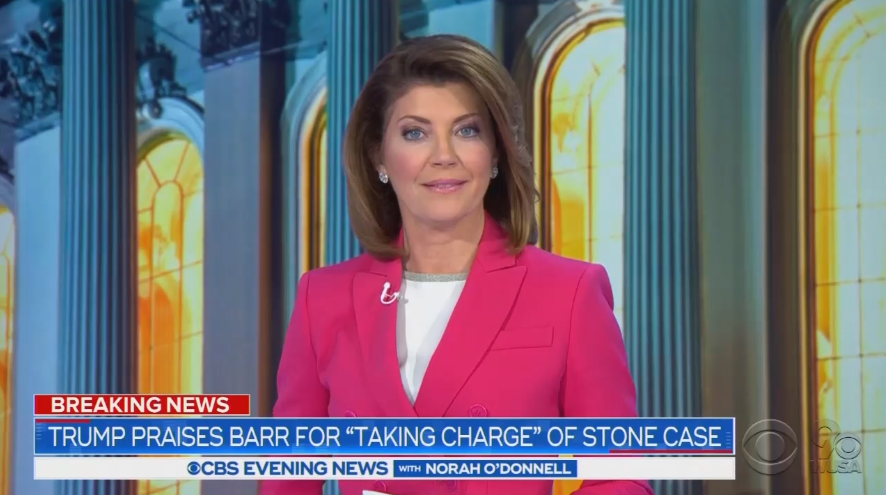 Without any evidence, the broadcast networks continued Wednesday to push the narrative that President Trump supposedly interfered with the sentencing of his longtime friend Roger Stone. And according to their accusations, a pair of Trump tweets were the smoking gun that proved he was “testing the independence of the Justice Department,” as CBS Evening News anchor Norah O’Donnell proclaimed.

Speaking of the media's speculation as if it was the truth, O’Donnell kicked off her struggling newscast by claiming: “President Trump is testing the independence of the Justice Department, thanking his Attorney General for taking charge of the case of his longtime friend Roger Stone, in an attempt to keep him out of jail.” That was a blatant lie from O’Donnell as the DOJ did want Stone to serve time.

Attorney General Barr had made it clear that Stone should be incarcerated, just not for the seven to nine years, federal prosecutors were chasing. As other news outlets had reported, in the filing overruling the prosecutors (which was a legal ability of the AG) DOJ leadership wrote that they were seeking “a sentence of incarceration far less than 87 to 108 months’ imprisonment would be reasonable.”

Of course, CBS leaned heavily on the shrill screeching of raging Democrats:

SENATOR RICHARD BLUMENTHAL (D-CT): Attorney General William Barr ought to be ashamed and be embarrassed, and resign.

REID: Democrats charge Barr with enabling an abuse of power.

SENATOR CHUCK SCHUMER (D-NY): I have formally requested that the inspector general of the Justice Department investigate this matter immediately.

ABC’s chief White House correspondent and White House Correspondents Association president, Jon Karl also keyed in on Trump’s tweets and suggested a different one was suspicious. “Both the White House and the Justice Department have said that the President had absolutely no involvement in this decision to overrule prosecutors in the Stone case, even though it came within hours of the President's tweet,” he said.

On NBC Nightly News, White House correspondent Peter Alexander was more direct and took his accusation about tweets straight to the President:

TRUMP: Not at all.

NBC was also invested in making the President seem out of control by repeatedly saying he was “lashing out” and “seething.” The soundbite Alexander used showed a man quiet reserved.

Back on CBS, Reid highlighted a soundbite of Senator Lindsey Graham (R-SC) criticizing Trump for tweeting about an ongoing case. But Alexander used a soundbite of him slamming the prosecutors. “I got real concerns about overzealous prosecution,” the Senator said.

This comes as all three of the broadcast networks have ignored congressional testimony from FBI Director Christopher Wray, where he admitted the start of the FBI’s Russia probe was “illegal.”

NORAH O’DONNELL: Good evening, and thank you so much for joining us. We're going to begin tonight with breaking news. President Trump is testing the independence of the Justice Department, thanking his Attorney General for taking charge of the case of his longtime friend Roger Stone, in an attempt to keep him out of jail. It's a highly unusual move for the President of the United States to lash out at a career Justice Department lawyers involved in such a case.

Stone, who first urged Trump to run for president emergency 30 years ago, was convicted by a jury in November on seven federal charges. But late today, the President claimed Stone was treated horribly. The President’s attacks appear to be part of a larger post-impeachment surge as -- [audio problem, mic cut out]

PAULA REID: President Trump shrugged off allegations he interfered in the Justice Department's handling of the Roger stone case.

PRESIDENT DONALD TRUMP: I'm not concerned about anything.

TRUMP: They ought to go back to school and learn, because I'll tell you, with the way they treated people.

REID: The Justice Department insists there was no coordination with the White House. But this morning, the President congratulated Barr for his involvement.

SEN. RICHARD BLUMENTHAL (D-CT): Attorney General William Barr ought to be ashamed and be embarrassed, and resign.

REID: Democrats charge Barr with enabling an abuse of power.

SEN. CHUCK SCHUMER (D-NY): I have formally requested that the inspector general of the Justice Department investigate this matter immediately.

SEN. LINDSEY GRAHAM (R-SC): I don't think the President should have tweeted about an ongoing case.

REID: But yesterday, the President penalized the U.S. attorney who oversaw Stone's trial, withdrawing her nomination for a top job at the Treasury Department. Democrats say the President's behavior proves he learned nothing from impeachment.

SEN. SHERROD BROWN (D-OH): He can abuse his office, he'll never, ever be held accountable by this Senate. That was the lesson.

REID: The President was asked this afternoon what he learned from impeachment. He said the lesson that he's taken away is simply that Democrats are crooked, vicious, and never should have brought impeachment charges in the first place. Norah.