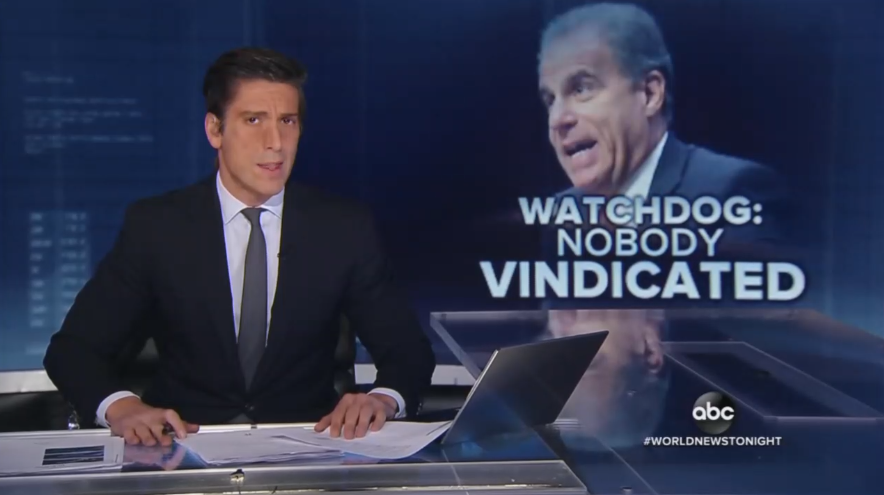 Senate Republicans grilled Department of Justice Inspector General Michael Horowitz, Wednesday, on how his probe could determine there was no political bias at the FBI against then-candidate Trump, when he couldn’t uncover a reasonable explanation for their “gross abuse” of the system, as Attorney General William Barr put it.

Well, ABC World News Tonight anchor David Muir continued to carry water for the FBI and claimed there was “no spying” despite the fact, the IG report exposed that there was.

Horowitz may have been using legalese to claim the FBI assets (some wearing wires) sent to monitor Trump campaign staff were actually “confidential human sources,” but any reasonable person understood them to be spies.

But reason didn’t preclude Muir from declaring falsehoods to be facts. “And now to the battle on Capitol Hill tonight over the report on the Russia investigation that determined no deep state, no spying on the Trump campaign. The author of that report, the inspector general, Michael Horowitz, saying the launch of the Russia investigation was, in fact, justified,” he proclaimed at the top of the segment.

During the report on the hearing, chief Justice correspondent Pierre Thomas noted: “President Trump tweeting from the White House, ‘They spied on my campaign!’” As the apparent rebuttal to the President, Thomas played this soundbite of California Democrat Dianne Feinstein getting Horowitz to say there was “no bias”:

FEINSTEIN: And you didn't find a deep state conspiracy against candidate or President Trump.

HOROWITZ: As to the opening, we found no bias, no testimonial evidence on that.

Meanwhile, the Fox News Channel’s Special Report ran soundbites of Republican senators calling out the FBI’s use of spies on Trump campaign officials.

SENATOR LINDSEY GRAHAM (R-SC): Was that FBI agent spying on Donald Trump when he went in there?

HOROWITZ: The agent was actually doing the briefing but also using it for the purpose of investigation.

“President Trump has insisted that the FBI spied on his 2016 campaign. And while Democrats maintain Horowitz’s report says that’s not the case, Horowitz did note the bureau sent agents to interact with and even record Trump associates,” reported FNC correspondent Mike Emanuel.

SENATOR TED CRUZ (R-TX): They sent spies to record senior members of the campaign in the middle of a presidential campaign!

HOROWITZ: They sent confidential human sources in to do those.

The liberal media can try to claim there was no bias, but again, Horowitz was using legalese to make that leap. In fact, when pressed on the matter, he said he couldn’t rule it out definitively. Even a reporter as entrenched in the intelligence community as NBC’s Ken Dilanian was able to admit it. “This is noteworthy. Horowitz is NOT saying he has ruled out political bias in the FBI's 17 Carter Page FISA errors,” he wrote on Twitter.

DAVID MUIR: And now to the battle on Capitol Hill tonight over the report on the Russia investigation that determined no deep state, no spying on the Trump campaign. The author of that report, the inspector general, Michael Horowitz, saying the launch of the Russia investigation was, in fact, justified. But he did acknowledge today that his report does not vindicate anyone. Here's ABC's chief Justice correspondent Pierre Thomas now.

PIERRE THOMAS: On Capitol Hill today, the Justice Department's inspector general, Michael Horowitz defending his conclusion that the FBI was justified in launching its investigation into Russia and the Trump campaign.

DOJ IG MICHAEL HOROWITZ: We did not find documentary or testimonial evidence that indicated political bias or improper motivation.

THOMAS: That conclusion now under attack from the attorney general, William Barr himself. Barr also insisting the FBI may have acted in bad faith.

THOMAS: President Trump tweeting from the White House, "They spied on my campaign!"

HOROWITZ: As to the opening, we found no bias, no testimonial evidence on that.

THOMAS: But Horowitz did have tough words for the FBI, saying they made “basic, fundamental and serious errors" in the investigation. Withholding evidence that could have weakened their case.

HOROWITZ: You know, I think the activities were found here don't vindicate anybody who touched this.

THOMAS: He cited one FBI attorney who altered documents in order to get a surveillance warrant for Trump campaign associate Carter Page.

SEN. LINDSEY GRAHAM (R-SC): Is it kind of off the charts bad?

MUIR: So, let's get back Pierre Thomas, with us again tonight from the Justice Department. And Pierre, we know Attorney General Bill Barr not willing to accept the finding that bias was not at the root of this FBI investigation that was launched, but today, the inspector general stood firm on that point.

THOMAS: Horowitz was quite firm, David, saying over and over again that he stands by everything in his report and he said he did not take the job to be popular, David.