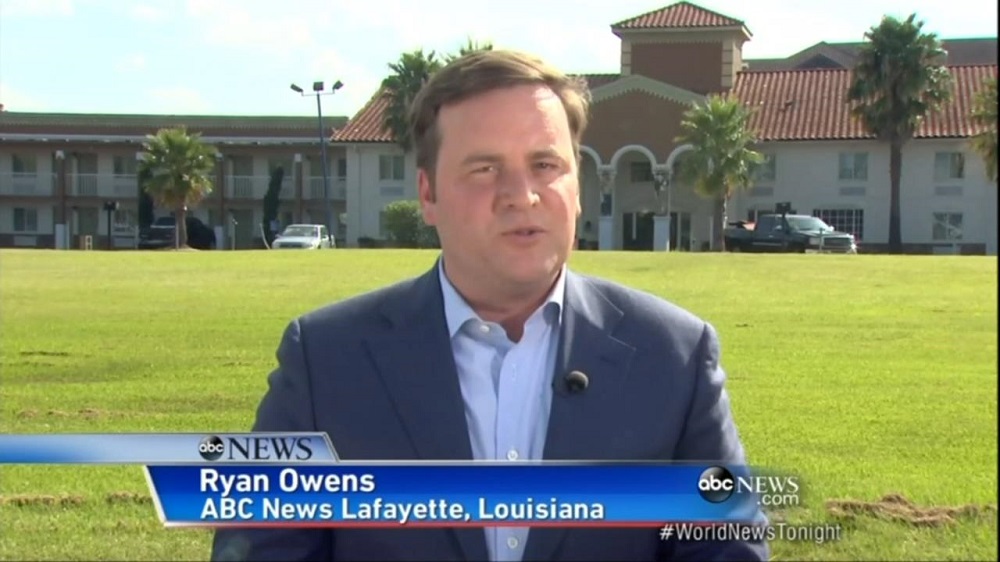 The correspondent included his political superlative near the end of his report on Houser's background. Moments earlier, Owens outlined the perpetrator's "troubled past" – including his "'extreme erratic behavior'...'various acts of family violence'... [and] 'manic depression and/or bipolar disorder.' He continued by noting that "in 2001, Houser placed a swastika on the outside of the bar he owned, but denied he was a Nazi sympathizer." The journalist then continued with his "ultra-conservative" label of the murderer.

The same evening, CBS and NBC's evening newscasts didn't explicitly give Houser's apparent ideological leanings during their reports on the shooter. On CBS Evening News, journalist Jeff Pegues reported that "online postings over the last several years suggest John Houser was angry and frustrated by social changes in the country." Pegues then cited the left-wing "Southern Poverty Law Center, which tracks extremists...[which] uncovered writings where Houser praised Adolf Hitler for accomplishing 'far more than any other,' and described America as a 'failing filth farm.' In January 2014, Houser allegedly encouraged others to 'realize the power of the lone wolf.'"

Correspondent Miguel Almaguer devoted only part of his report on the mass shooting to Houser's past:

MIGUEL ALMAGUER (voice-over): The shooter is 59-year-old John 'Rusty' Houser, a drifter from Phoenix City, Alabama. He had been staying at the local Motel 6, where police say they found disguises – including wigs and glasses. The gunman appears to have posted numerous radical comments on a rage of topics, including lone-wolf acts of violence.

In 2008, Houser's family asked for a protective order. In court documents obtained by NBC News, his wife said he had a 'history of mental issues,' i.e., 'manic depression and/or bipolar disorder;' 'exhibited extreme erratic behavior.' In a police report, Houser's wife said she removed all the guns from their house – he 'should not have one unless he obtained it illegally.'

DAVID MUIR: And this evening, we have new details also coming in on the suspected gunman: the wigs, the disguises discovered in the motel room nearby.

ABC's Ryan Owens on that part of the story tonight.

RYAN OWENS (voice-over): Life began to unravel years ago for the man police describe as a 'drifter.' Rusty Houser spent the last few weeks living at this Motel 6 in Lafayette. What detectives say they found in his room only deepens the mystery.

CHIEF JIM CRAFT, LAFAYETTE POLICE DEPT. (from press conference): We found wigs and glasses and disguises, basically, in his room.

OWENS: There's no disguising Houser's troubled past. His last known address was here in Alabama, where he was evicted last year after owners say he trashed their house.

NORMAN BONE, HOMEOWNER: He really did a job on it – messed it up – poured concrete down every drain.

OWENS: His marriage fell apart, too. In 2008, his wife and family asked for a protective order, saying he exhibited 'extreme erratic behavior' – including 'various acts of family violence.' The court filing says he had 'manic depression and/or bipolar disorder – his wife so worried she removed all guns from their home.

In 2001, Houser placed a swastika on the outside of the bar he owned, but denied he was a Nazi sympathizer. Houser was well-educated and politically active – even running for office as an ultra-conservative, anti-tax crusader in Georgia.

BOBBY PETERS, FORMER MAYOR, COLUMBUS, GEORGIA: I think he portrayed himself as a community watchdog against government.

OWENS (on-camera): Tonight, investigators are scouring Houser's postings on known anti-government websites – hoping, perhaps, to find some answers there – like, why was he at this motel? Why was he even in Lafayette to begin with? A real question for people here. David?

MUIR: Ryan Owens, our thanks to you tonight.