Don Lemon Goes Soft on Antisemitism: 'Whether You Agree With Kyrie Irving Or Not...'

What's next, Don Lemon: "whether or not you agree with the people hanging 'Kanye Is Right' banners?"

Lemon hosted a segment on Thursday's CNN This Morning to discuss LeBron James complaining that his old Cavaliers teammate Kyrie Irving has been subjected to intense criticism over his promotion of an antisemitic book and movie, whereas there has been relatively little attention paid to a photo that recently published by The Washington Post showing a 14-year-old Jerry Jones, now owner of the Dallas Cowboys, in a crowd blocking black children from entering a North Little Rock school in 1957.

Jones claims he was curious, but not a participant in the event. He was 14. Kyrie Irving is 30.

At one point, Lemon said of LeBron's statement:

So, there are two legitimate sides to this, Don? Those that agree with Irving that it is worthwhile to promote vile antisemitic tropes, including Holocaust denial, and those that don't?

To paraphrase a former president, are there "very fine people" on both sides of Kyrie Irving's promotion of antisemitism, Don?

Lemon also praised LeBron's "courage" in speaking out on the issue. Does anyone imagine that in making his statement, James put anything at risk? 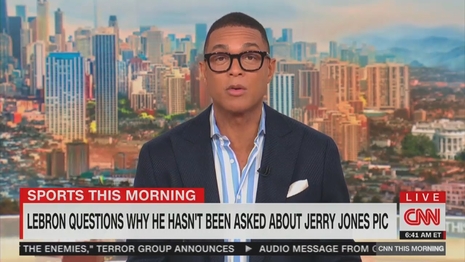 Note: although it hasn't attracted as much attention, Irving's promotion of Hebrews To Negroes wasn't his first foray into the sewer of conspiracy theories with antisemitic implications. As has been reported:

"In September, Irving tweeted a video by far-right conspiracy theorist and provocateur Alex Jones. In the video, Jones claims secret societies or 'occults' are in control of America, which Irving said he believes to be true."

Should we also be on the lookout for Lemon saying, "whether you agree with Alex Jones or not?

On CNN This Morning, Don Lemon, discussing Kyrie Irving's promotion of antisemitism, saying "whether you agree with Kyrie Irving or not," was sponsored in part by VisionWorks, GoDaddy, T-Mobile, and Lincoln.

DON LEMON: It's time for sports in the morning. LeBron James, calling out reporters. The NBA superstar saying there's a double standard when it comes to how the media covered the controversy surrounding Kyrie Irving's tweet, supporting a documentary deemed to be antisemitic, and the way the media covered the photo that has emerged of Dallas Cowboys owner Jerry Jones among the crowd of white students attempting to block black students from entering the doors of North Little Rock High School. This was in 1957.
Listen to this.

LEBRON JAMES: I have one question for you guys before you guys leave. I was thinking when I was on my way over here. I was wondering why I haven't gotten a question from you guys about the Jerry Jones photo? But when the Kyrie thing was going on, you guys were quick to ask us questions about that.

And that Jerry Jones photo is one of those moments that our people, black people, have been through in America. And I feel like, as a black man, as a black athlete, as someone with power and a platform, when we do something wrong, or something that people don't agree with, it's on every single tabloid, every single news coverage, it's on the bottom ticker, it's asked about every single day. But it seems like to me like the whole Jerry Jones situation, photo -- and I know it was years and years ago, and we all make mistakes. I get it. But it seems like it's been buried under, like, oh, it happened. Okay, we just move on. And I was just kind of disappointed that I haven't received that question from you guys.