On today's Morning Joe, Mika acknowledged that Mike Pence had offered a "full-throated, robust" criticism of Donald Trump for his dinner with Nick Fuentes and Kanye West.

In an interview yesterday with Leland Vittert on NewsNation, Pence said:

But actually praising Pence for his statement? That was just a bridge too far for Mika.

Perhaps she feared getting trashed by the left for giving aid and comfort to the enemy. Or even, heaven forbid, turning up in a future Pence for President campaign ad! Check out the screencap. Poor Mika! The thought of praising Pence patently pained her! 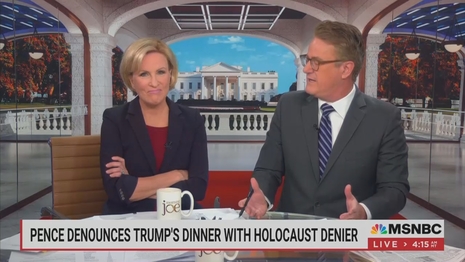 And so, when Joe Scarborough began to praise Pence, Mika balked. When Scarborough said that Pence was "doing what he should be doing," Mika interjected:

"Should have been [doing before], some would say."

Scarborough then summoned some of his Baptist background, and in a reference to people at Revivals, said, "They played 'Just As I Am,' Mike's walking down to the front, the invitation, we're going to accept him."

Mika kvetched: "He was his Vice President."

And when Scarborough said of Pence's statement, "we're glad," Mika responded dubiously, "really?", adding that she was going to have to "work on it."

After Scarborough repeatedly made the point that Pence, after all, "did it," that they should acknowledge "one step forward," Mika sighed so deeply that Scarborough expressed concern for her: "how are you doing?"

Pence accusing Trump of "profoundly poor judgment" was very tough stuff, especially coming from someone who as Vice President stood steadfastly behind Trump during his various controversies.

On Morning Joe, Mika Brzezinski being very reluctant to praise Mike Pence for having strongly criticized Donald Trump for having dinner with Nick Fuentes and Kanye West was sponsored in part by Pfizer, maker of Nexium, Abbott, maker of Skyrizi, and Clear Choice.

MIKE PENCE: It's wrong to give a white nationalist, an anti-semite, and a Holocaust denier a seat at the table. And I think he should apologize for it, and he should denounce those individuals and their hateful rhetoric without qualification. I think the president demonstrated profoundly poor judgment in giving those individuals a seat at the table.

MIKA: So that was actually a full-throated, robust response to it.

JOE SCARBOROUGH: Yeah, it was.

MIKA: He's calling on the former president to apologize for what he's done. It's very different than saying, yeah, maybe I would have done something different, or I wouldn't have done that, hemming and hawing out of it. That was -- Mike Pence is lining up.

SCARBOROUGH: Well, he's doing what he should be doing.

MIKA: Should have been, some would say.

MIKA: They played "Just As I Am," Mike's walking down to the front, the invitation, we're going to accept him.

MIKA: He was his Vice President.

SCARBOROUGH: We're not going to ask -- but we're glad.

SCARBOROUGH: We're glad that he --

MIKA: I'm going to work on that one.

SCARBOROUGH: You're not glad that he didn't --

SCARBOROUGH: But he did it.
\
MIKA: Okay.

SCARBOROUGH: Right? He did it.

SCARBOROUGH: He did it. Mark that down. One step forward, right?

SCARBOROUGH: And he did it, Willie --

SCARBOROUGH: How are you doing?