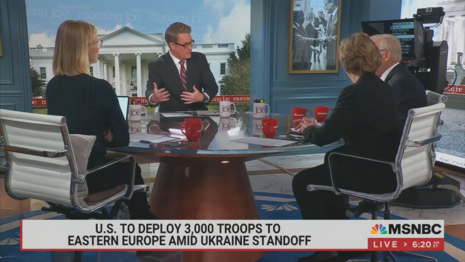 On Thursday's Morning Joe, Joe Scarborough energetically tried to channel the insecurities of poor Vladimir Putin as he masses his troops on Ukrainian border.

Arguing that we need to respect Russia's need for secure borders, Scarborough said that Ukraine "is like a knife that cuts straight into the heart of Russia."

No fewer than six times, Scarborough cited the 27 million Russians who were killed during World War II, even tying their tender feelings to the Holocaust: "The point is they are defined by losing 27 million people during World War II, just like, just like Jews are defined right now by losing six million Jews during the same conflict. It can't help if you lose 27 million people to shape your thinking and to say, never again."

What Scarborough failed to mention was that Russia lost 27 million people due to the invasion by Hitler! And that the US and other western countries became the Soviet Union's allies, helping it defeat Hitler and end the killing.

Yet Scarborough somehow seemed to lump the US in the same threatening category toward Russia as Nazi Germany! Absurd!

MSNBC regular and Washington Post columnist David Ignatius tried to gently talk Scarborough off the ledge, saying it was valuable "to understand how our adversary looks at the world," agreeing that "every country deserves to have secure borders."

Katty Kay, to her credit, pointed out that no one is threatening Russia's borders. And that to appease Putin now could encourage his future territorial ambitions.

Scarborough concluded by saying we have to figure out how to help Putin "get out of the corner." Scarborough denied that he was suggesting concessions--but it sure sounded like it! Scarborough also suggested that we consider how the US would feel if Russia signed a mutual security pact with Mexico.

Wondering who beamed these bizarre thoughts into Scarborough's brain? We know one thing: Scarborough sounded a lot like Fox News host Tucker Carlson, who said almost the same thing in explaining the Putin mindset, just exchanging China for Russia in terms of being a threat from Mexico.

Joy Reid's blog was all over Tucker for that. Ayman Mohyeldin speculated Tucker was Russian-trained.  MSNBC openly mocked Tucker as a "useful idiot" on Twitter through Peter Strzok:

"Tucker Carlson is walking proof that you don't need to be an agent to be a useful idiot," Peter Strzok says. "I think when the Russians...see and hear what Tucker Carlson is saying they see this as strong evidence of a split in American society." https://t.co/o23UveVgSw

They lost their empire in 1991 and you have people talking about expanding NATO into Ukraine, a region that, yes, most Russians still consider to be a part of sort of this greater Soviet state. And you look at Ukraine, and it is like a knife that cuts straight into the heart of Russia.

I always think about when we're lecturing Israel, when we have people that want to win Nobel prizes for peace and are lecturing Israel to do some things that will hurt their security because they want Nobel peace prizes. I'd say, what if we'd do that?

If people lined up along the Mexico border or the Canadian border. So I ask the question that I think Putin has asked and other Russians have asked. What if Russia signed a security alliance with Mexico? How many days do you think we would put up with that? . . . We just need to think like, see what they're looking at.

IGNATIUS: We need to understand how our adversary looks at the world and see through their eyes to the extent we can. Every country deserves to have secure borders.

KATTY KAY: Russia has secure borders. Nobody has invaded Russia.

IGNATIUS: Nobody has invaded Russia.

KAY: Russia has been making grabs from Georgia, from Ukraine, from Crimea. Nobody's threatened Russia's borders. And for 30 years, Ukraine has been an independent country with now almost two generations of an independent people. I understand the point, and that's how Russia is feeling. But in a way, if we put ourselves too much into the mindset of Putin, and thinking, well, that's how Russia is feeling, you end up potentially making concessions to Russia over this crisis that may just encourage him to do it again.

SCARBOROUGH: But Katty, the point isn't that they've invaded anybody over the last two generations. The point is they are defined by losing 27 million people during World War II, just like, just like Jews are defined right now by losing six million Jews during the same conflict. It can't help if you lose 27 million people to shape your thinking and to say, never again.

And again, I'm not saying this to say we should give concessions to Russia. I'm just saying if we want to get -- help him get out of the corner so we don't have a European war, we need to start asking ourselves, what are they thinking, how can we help them out of the corner?