Pro-life people would reject Mystal's foul metaphor. They would instead point out that Mystal and his ilk would treat unborn children like a clump of cells to be discarded at will up to—and in the case of opponents of born-alive protections, even beyond—the moment of birth.

This being Cross's show, race was inevitably brought into the discussion. Felice León of The Root said that her "black and brown sisters" in Mississippi would be particularly affected by the state's law, since they obtain a disproportionate number of abortions. León described the state Attorney General bringing the case before the Supreme Court as "a wealthy white woman who is acting in the interest of conservatives and other wealthy white women."

In fact, by León's own calculus, Mississippi's law would protect the lives of unborn black and Latino children in relatively greater proportions.

Abortion-rights promoters like Mystal and Cross like to allude to "The Handmaid's Tale" in an effort to belittle pro-life women as mindless robots subjugated by men. Mystal claimed, "we treat women like we're in Gilead already." And Cross disparaged Justice Amy Coney Barrett as "an actual real, live 'Handmaid' on the Supreme Court." 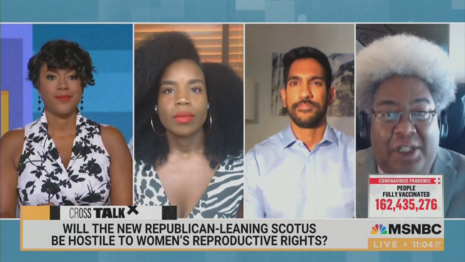 Mystal ended the segment by saying that the only way to protect abortion rights is to pack the Supreme Court—a pet cause of the bombastic liberal.

Oddly, Mystal, a lawyer, described court-packing as a "constitutional" power. Was he implying that a constitutional amendment would be required? In fact, a cause of concern for pro-lifers and conservatives at large is that the Court could be expanded via the normal congressional process.

It's noteworthy that even that liberal lion of the Court, the late Ruth Bader Ginsburg, opposed expanding the Court's size, saying nine "seems to be a good number." Was Bader Ginsburg one of the "spineless liberals" that Mystal castigated earlier in his spiel?

TIFFANY CROSS: I want to switch gears and turn to Mississippi, because this week the state asked, explicitly, the Supreme Court to overturn Roe v. Wade.

ELIE MYSTAL: The standard in Roe v. Wade, as updated by Planned Parenthood v. Casey 40 years ago, is that before fetal viability, so before 24, 22 weeks, a woman has some right to choose.

Remember, already, after fetal viability, we treat women like we're in Gilead already.

FELICE LEON: we also know that women of color, and low-income women, get abortions at higher rates than white women and more affluent women. So any law will impact my sisters, my black and brown sisters in Mississippi for sure, and this really shows that the attorney general ultimately is a wealthy white woman who is acting in the interest of conservatives and other wealthy white women.

AMY CONEY BARRETT: I don’t think that abortion or the right to abortion would change.

BARRETT: I think some of the restrictions might change.

CROSS: I mean, she kind of warned us, right? There’s an actual, real-life Handmaid on the Supreme Court saying this. What do we do? Do we expand the Court? How do we handle this?

MYSTAL: If we want to stop them, as you say Tiffany, the only thing is to use our constitutional power and expand the number of Justices on the Supreme Court. That’s the solution. That's the only solution.