On Thursday, two days since 21 people lost their lives in the Texas shooting and the hosts of MSNBC’s Morning Joe are still pointing fingers at the Republican Party for the terrible tragedy. In addition, they broke down the supposed “The Conservative Playbook for Deflecting Anger After Mass Shootings,” written by a liberal.

After his rant about political courage in regards to Beto O’Rourke’s comments last night, host Joe Scarborough went on to comment “Because, again, look over there. Look over there. It is always something else. It's mental health. I haven't seen governor Abbott funding mental health in Texas.” He also claimed that Governor Abbott was only using it as another excuse to “make people forget about the slaughter.”

Morning Joe guest, Princeton Professor Eddie Glaude Jr. continued this discussion further by stating that there has been “this crude cynical political play that has been playing out for at least four years” and that throughout COVID and other mass shootings, there has been a lot of “selfishness” going along with it.

This prompted co-host Willie Geist to talk about how conservative media outlets such as Fox News tell gun owners to hide their guns and yet there is no “big seizure,” leading Mika Brzezinski to ask “Do we need to be able to buy land mines now, wh-, how far does this go?”

This was when Scarborough brought up an interesting idea. After branding conservative and right-wing media’s gun messages as a “constant scam”, he went on to say that the right is having a “hippie” moment and lacking any form of regard for their families and others around them; and if Heaven forbid someone tries to stand in the way of their guns and whatever else they want to do, those people are “communists.” 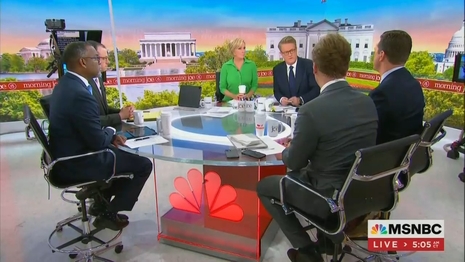 Brzezinski went on to express her disgust with the NRA meeting continuing to be held in Texas. She bashed Republicans further by ranting that “I just want to take the word, the concept of baby killer that Republicans use all the time to sit on their high horse and act all judgmental, and stamp up right across all their names”, implying they're hypocrites for supporting gun rights and yet they are against abortion.

New York magazine writer Jonathan Chait then joined in on the conversation with Brzezinski reading an excerpt from his article: "The Conservative Playbook for Deflecting Anger After Mass Shootings." She went on reading that through the steps of this “playbook”, Republicans attempt to “to locate solutions outside of gun control. And blame Democrats for opposing them.”

When asking Chait about this article he replied “That's a great point on mental health.”, agreeing with Brzezinski that conservatives love to use it as an excuse for mass shootings, labeling mental health as a “distraction” from what really has to be done.

Do Joe Scarborough and friends really think that ranting and whining about the GOP will bring about positive solutions? Or are they just trying to fill up their three-hour duration by throwing harmless insults at those who don’t agree with them?

This example of media bias was brought to you by Wayfair and Golden Corral.

JOE SCARBOROUGH: Eddie, every time, they come up with a different excuse. It's video games. It's video games, like the United States of America is the only -- only country in the world where kids play Call of Duty.

SCARBOROUGH: The senseless slaughter that continues because of -- of --- of -- of permissive gun laws.

SCARBOROUGH: That's -- that's the difference and it's a big difference.

SCARBOROUGH: It's the difference.

GLAUDE JR.: In so many ways. I want to really just underline and underscore how you framed the discussion this morning. If this is a moral issue, a country captured by a paranoid minority, you know? And part of what I'm thinking about --

SCARBOROUGH: Why are they paranoid?

GLAUDE JR.: -- well, it -- it varies, right? The main reason is there is this fear that government, that big brother --

SCARBOROUGH: Where do they get their fear?

GLAUDE JR.: Ah, from --- from a particular party that exploits grievances.

SCARBOROUGH: --- who's been talking about jack-booted thugs since 1994. That's when George H. W. Bush and others quit the NRA. It's a campaign. It’s a campaign of fear, isn't it?

SCARBOROUGH: Not just from the NRA but from TV networks --

GLAUDE JR.: Yeah, so there's this crude cynical political play that has been playing out for at least four years. And then there's this other part, Joe, about the moral component. I know it's horrible that these babies are dead, but don't take away my gun. I know a million Americans have died, but I don't want to wear a mask. I know -- I mean, part of what I'm trying to suggest here is that there is a selfishness that is at the heart of the country, that's corroding, right, any sense of public good.

SCARBOROUGH: It is a constant scam. They're constantly whipping people into a frenzy. They're coming for your guns and they preach. We saw it during COVID. There's this hyper toxic individual individuality --

SCARBOROUGH: But you know what else they're doing right now? They're killing 13-year-old girls in a lot of states. If you get raped by uncle, we're taking that choice from you.

SCARBOROUGH: The AR-15s -- they're killing machines, smaller caliber, so when it hits flesh, it goes apart. It destroys. It's just a killing machine. It's lighter. It's easier to use. It's easier to carry and it is designed to be the most effective killing machine to kill human beings, Tom. This is what -- this is what Greg Abbott and Ron DeSantis and, I guess, Mitch McConnell and every other Republican in the Senate want 18-year-olds to be able to buy for their 18th birthday.

BRZEZINSKI: My question, I'll just put the question out there and let it hang is at what point does cowardice and avoidance become evil as well? Because Governor Abbott was wondering, what could be more evil than what the shooter did? And I have a question for Republican politicians: is avoidance of what is obvious and what is killing our babies, baby killers, what is killing our babies? Evil, is avoiding the issue. Like, there’s three pillars, maybe, okay, and maybe one is mental illness is one of them, but you really can’t say that the prevalence and the surging sales of guns in America that have, like, skyrocketed over the past few years according to the Bureau of Alcohol, Tobacco, and Firearms, you cannot say that—that—isn’t part of the issue. You cannot avoid that without being complicit—

BRZEZINSKI: --and then head to your NRA meeting this weekend. It's disgusting. It is so disgusting.

BRZEZINSKI: I just want to take the word, the concept of baby killer that Republicans use all the time to sit on their high horse and act all judgmental, and stamp it right across all their names, until they actually face the problem.

BRZEZINSKI: Let's bring in writer for the New York magazine, Jonathan Chait, his latest article for the magazine is entitled "The Conservative Playbook for Deflecting Anger After Mass Shootings [deleted period]" And in it, Jonathan writes, in part, "These responses tend to follow a script which has been on display in the wake of the most recent mass murder at an elementary school in Uvalde, Texas. One element of the response is to insist the events are nonpolitical, and to any efforts to use them to highlight the need for a policy response is a breach of decorum. A second method is make the case for futility by insisting that not every proposed gun-control measure would end every instance of gun violence. The final step is to locate solutions outside of gun control and blame Democrats for opposing them.” And here we have the ultimate, Jonathan, in hypocrisy because we had a governor who slashed mental health funding using mental health as his issue to avoid guns. Tell us more about your article

JONATHAN CHAIT: Yeah. That's a great point on mental health because mental health is a policy response that conservatives become very enthusiastic about in the wake of every mass murder and then lose all interest in it every other time of the year, so its only purpose is to serve as a distraction.