On Wednesday, most people are mourning the losses of young innocent lives along with two teachers at the Robb Elementary School in Uvalde, Texas. However, that did not prevent those on MSNBC’s Morning Joe from continuously blaming Texas Senator Ted Cruz, Governor Greg Abbott, and the rest of the Republican Party for the school shooting that took place.

The show started out with its main host Joe Scarborough going after Republicans, branding them as cowards, liars, hypocrites, barbarians among other things. Scarborough compared their reactions to those on 9/11 and January 6, expressing how “they want you to forget about it”, or simply think “that’s just the cost of freedom.”

However, the blaming did not stop there, as MSNBC contributor Mike Barnicle remarked that you get Cruz and Abbott  “when you mix insanity with hypocrisy.”

Scarborough even went after Fox News. He accused them of spreading paranoia across America, alerting gun owners that the government is coming for their guns and scaring these “freaks” and conspiracy theorists as a result. “We also hear something really gross from the same people who will desperately seek, to find any crime that an illegal immigrant causes and then run it on the TV network for 24 hours a day,” he added.

Co-host Willie Geist agreed with Scarborough when he said that the world we are living in is comparable to a game of “whac-a-mole” due to all the trouble America has with conspiracy theories, legislation, and especially with the debate on guns. “Again, it's always whac-a-mole.”, Scarborough continues, “And if you describe a gun a certain way, you say assault weapon. Oh, it's not an assault weapon.” 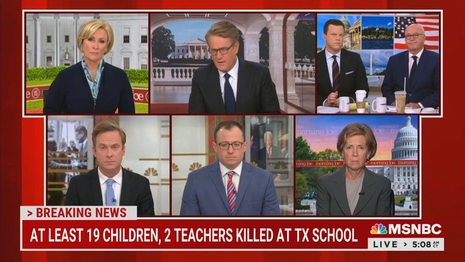 And while he was decrying access to ARs and others have been calling for them to be banned, Scarborough claimed no one was looking “to kick down your door and take away your gun! … No, nobody's talking about that.”

Co-host Mika Brzezinski and Parkland parent Fred Guttenberg also said their respective pieces; with Brzezinski saying that she wondered if Republicans were going to “cower away from the cameras”, mentioned Ted Cruz and wondered if anything would be addressed at the upcoming NRA conference in Houston.

As for Guttenberg, at the mention of the Texas Senator, he said that Ted Cruz “won’t change because he is “evil” and “he can go – himself.” He recounted how he sat down with Cruz and “begged” him to do something about these shootings three years ago. Not only did he blame Ted Cruz, he even blamed Governor Abbott, citing the Texas governor’s previous statement that encouraged Texans to buy more guns.

Guttenberg called on Ted Cruz and the Republicans to work with “hero” Senator Chris Murphy and his colleagues to actually do something about the gun violence going on in our country, saying that it was the only way for things to get better.

It is easy to determine that the media will not get anywhere by tirelessly blaming the GOP on the mass shooting.