On Friday, the NBC, CBS, and ABC morning shows all blasted Thursday’s Republican presidential debate as “vulgar” “silly” and “childish.” The same networks that have routinely provided ample airtime to Donald Trump’s personal attacks on his rivals, lectured the GOP contenders on civility.

In the report that followed, correspondent Peter Alexander scolded: “So apparently this is how we pick our presidents....this debate was at best silly, even surreal, with name calling, taunts, flying accusations....With the stakes never higher, the blows kept getting lower.”

At the top of the 9 a.m. ET hour, co-host Willie Geist returned to the topic: “The final four Republican candidates met in Detroit last night for their first debate after Super Tuesday, but it descended very quickly into some childish, vulgar moments, choose your term.”

Fellow co-host Natalie Morales chimed in: “It's not even high school level here.” Weatherperson Dylan Dreyer added: “I feel like we're one debate away from whoopee cushions being put on seat and just like – just taking it as childish as we can get.”

You know, I just don't understand how, you know, the country can allow this to continue. Because you let your kids watch these debates, you know, you want them to understand the – you know, what goes into the process of electing a president. And they can't watch this debate because it ends up in a round of bullying, child-like behavior, with name calling and everything else that you teach your kids not to do. That’s what they’re doing.

At the top of CBS This Morning, co-host Charlie Rose announced: “Blistering attacks dominate a vulgar GOP debate.” Minutes later, he hyped: “One of the most tumultuous days in Republican Party history ended with a bitter presidential debate. Last night's tone was fiery, insulting, and at one point, indecent.”

Correspondent Major Garrett described: “The atmosphere was tense and the confrontational as the battle lines have never been more sharply drawn....The 11th Republican debate started with a lewd response from Donald Trump to a days-old slight, that new low that foreshadowed the brawl to come.”

The coverage on ABC’s Good Morning America led off with Lara Spencer touting: “And guys, take a look at this. Hillary Clinton's campaign having a little fun during the debate. There they are, tweeting out an image of three Republican candidates arguing and a shot of Clinton looking, well, slightly less than impressed.”

Here is a full transcript of Alexander’s March 4 report on Today: 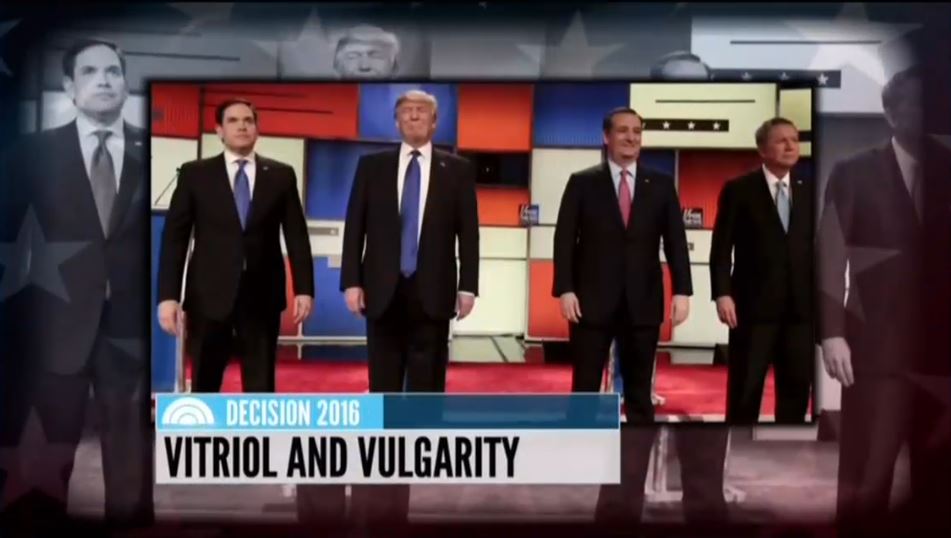 DONALD TRUMP: He hit my hands. Nobody has ever hit my hands, I’ve never heard of this one. Look at those hands. Are they small hands?

LAUER: Is this any way to elect a president? Former Republican nominee Mitt Romney is here this morning to talk about that and his unprecedented attack on the current frontrunner.

MITT ROMNEY: Donald Trump is a phony, a fraud.

LAUER: Our exclusive interview with the man who some say wants to be the savior for the Republicans.

SAVANNAH GUTHRIE: New nastiness, new lows in the Republican presidential race. Donald Trump facing new fire from his fellow candidates and his party’s 2012 nominee, Mitt Romney. And as we just mentioned, Governor Romney is with us here in our studio exclusively. We'll talk to him in a moment. But let us start with NBC national correspondent Peter Alexander. He’s here to break down last night's debate. Peter, good morning, and you were at the speech yesterday as well.

PETER ALEXANDER: So apparently this is how we pick our presidents. Donald Trump spent another night fending off his rivals and the moderators, who challenged his inconsistent positions from the past. Those were the serious moments, but to put this mildly, this debate was at best silly, even surreal, with name calling, taunts, flying accusations, including one that we in the media just can't fact check.

With the stakes never higher...

ALEXANDER: ...the blows kept getting lower.

TRUMP: You're the liar, you’re the lying guy up here.

ALEXANDER: The showdown at Motown at times coming down to hand-to-hand combat.

TRUMP: Look at those hands, are they small hands? He referred to my hands, if they're small, something else must be small. I guarantee you, there's no problem. I guarantee you.

ALEXANDER: Instead, Donald Trump ripping his rivals down to size.

TRUMP: This little guy has lied so much about my record.

ALEXANDER: The tycoon getting hit from both sides.

TRUMP: Excuse me, I’ve given my answer lying Ted.

ALEXANDER: But pivoting to the nominee’s likely opponent this fall.

TRUMP: I have not started on Hillary yet. Believe me, I will start soon.

ALEXANDER: Making nice with the moderator.

TRUMP: Nice to be with you, Megyn.

MEGYN KELLY: Great to have you here.

ALEXANDER: And using his place in the center to move to the middle.

TRUMP: You have to be able to have some flexibility, some negotiation. I'm changing it and I’m  softening the position.

ALEXANDER: But Marco Rubio and Ted Cruz not softening their attacks on the frontrunner's failed business dealings, like the now defunct Trump University, that’s landed Trump a defendant in a class action lawsuit.

SEN. TED CRUZ [R-TX]: If we nominate Donald, we're going to spend the spring, the fall, and the summer with the Republican nominee facing a fraud trial.

CRUZ: With Hillary Clinton saying, “Why did you give my campaign and my foundation a hundred thousand dollars?”

TRUMP: It's a minor civil case!

TRUMP: The real con artist is Senator Marco Rubio, who was elected in Florida.

ALEXANDER: With only John Kasich sticking to an uplifting message.

GOV. JOHN KASICH [R-OH]: Why don't we come together as a country, respect one another, love one another, and lift this country?

ALEXANDER: And insisting he'll stay in the race through Ohio.

KASICH: It’s now March Madness and we're heading up north, to the place – to my turf, okay?

ALEXANDER: Hours earlier, the party’s 2012 nominee unleashed an unprecedented attack on the 2016 favorite.

MITT ROMNEY: Donald Trump is a phony, a fraud. His promises are as worthless as a degree from Trump University.

ROMNEY: But you say, “Wait, wait, wait, isn't he a huge business success? Doesn’t he know what he’s talking about?” No, he isn't, and no, he doesn’t.

ALEXANDER: But the Stop Trump movement may have been stopped in its tracks with Trump's three remaining rivals all pledging to back him if he's the nominee, even as they continue to challenge Trump.

CRUZ: Donald has a tenuous relationship with the truth.

TRUMP: That is not what you said in the op-ed.

CRUZ: Donald, please, I know it's hard to not interrupt, but try. Breathe, breathe.

TRUMP: But that’s not what you said in the op-ed. Lying Ted.

RUBIO: When they're done with the yoga, can I answer a question?

CRUZ: I really hope that we don’t see yoga on this stage.

ALEXANDER: So it all comes down these next eleven days leading up to the next Super Tuesday, that’s March 15th, when we'll likely learn whether Donald Trump will be able to secure the nomination or if the Republican race is really headed toward a contested convention. That is a scenario that Mitt Romney seemed to push for, urging Republicans to support Rubio and Kasich in their home states and Cruz elsewhere. It’s also a situation where nothing would stop party leaders from adding Romney's name to the mix.

GUTHRIE: Alright, Peter, thank you so much. Good place to start with Governor Romney. Let’s send it over to Matt.

MATT LAUER: Yeah, thanks for that set up, Peter.