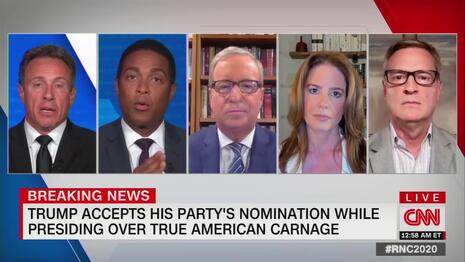 CNN has become so desperate to blame President Trump for the violence by radical leftists on the streets of America that they’ll even attack President Obama to make their case.

During the network’s post-convention coverage early Friday morning, former RNC official and CNN commentator Mike Shields pointed out the media’s hypocrisy in trying to pin President Trump for the BLM violence, while giving President Obama a pass for cities like Ferguson that were destroyed by BLM during his presidency. He made this point after Chris Cuomo demanded he answer who’s to blame for the violence:

CHRIS CUOMO: Whose fault are the riots that are going on in these cities? Donald Trump’s? Or the left that whips people up into a fringe and a frenzy and motivates people like Antifa and Black lives matter to use violence as an instruction for their own political beliefs? ...Who’s to blame President Trump or the left?

MIKE SHIELDS: Who -- whose fault was it -- whose fault was it when there was riots in Ferguson when Barack Obama was president? When Colin Kaepernick kneeled to bring social justice to a highlight, it was during the Obama administration. It was, literally, four ago, yesterday. So this is a problem that has been going on. How you deal with it is what matters.

In fact, Shields was only pointing out the double standard, he wasn’t blaming Obama at all, as he goes on to explicitly state. Despite this, CNN’s Don Lemon was so committed to the media’s new narrative that all this violence was Trump’s fault, he was willing to throw the left’s former savior Barack Obama under the bus to make his point:

LEMON: Let me answer your question. So let's just say that, during the Obama administration, that the rioting in Ferguson was Obama's fault because it happened on his watch.

LEMON: No I’m saying it was--because it did happen on his watch!

SHIELDS: for being responsible for rioting that happens in a city somewhere--When you have a riot, the local police need to come stop it and not give up a single city block, and restore law and order so peaceful protestors can go out, sharing their views, peacefully, without being caught up in something. Burning property and scaring the hell out of people.

After Shields argued local Democrat leaders like Mayor De Blasio objected to Trump sending in the National Guard to protect black communities and businesses, Lemon glossed over that before going back to his Obama point.

The CNN host falsely claimed Obama "took responsibility" for Ferguson, just so he could claim Trump had to do this as well:

When exactly did Obama put the blame on himself for Ferguson? Also Lemon in 2014, apparently thought Obama handled the riots well, as he expressed on CNN at the time.

Immediately after this, CNN senior political analyst Kirsten Powers weighed in with this absurdity: "Let's be honest Don...there's very little rioting, there's actually very little violence" at these protests but they've been "magnified" by President Trump and Republicans. CNN wants you to not believe your lying eyes and instead take their word for it while Democrat leaders let cities crumble to violence.