CNN Cheers for DNC Excluding 'White Men’... Except for Biden, Of Course 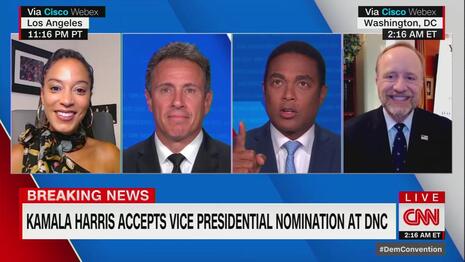 On CNN's New Day Thursday morning, Biden-adviser Ana Navarro praised Democrats for protecting her from seeing too many white men on television for the last “eight hours:"

Actually, today with David [Axelrod] and John[Berman] is the first time I see a white man like in eight hours. You know? Other than Joe Biden last night and that's okay. They have had 240 years of representation. They're going to be okay. Last night was about telling people who have felt unseen, we see you. You are here. You are part of this table. And I thought it was inclusive...

Navarro seems to be fond for sharing her bigoted comments about white men on CNN. Yesterday on New Day she joked about speaking over white panelist David Gregory saying, "white men are highly overrated."

But it wasn’t just Navarro making what would be considered racist/sexist comments if said about literally any other people group. After the convention Wednesday night, an early morning CNN panel consisting of Don Lemon, Angela Rye, Chris Cuomo and Paul Begala took delight in the idea that white men were underrepresented at the convention that night.

Bill Clinton adviser and CNN political contributor Paul Begala joked that for the nation to have true equality, no white men could be president again until 2251 (did he forget about Biden?) Click "expand" to read the exchange:

DON LEMON: Correct me if I'm wrong because I had to go to work tonight, and I did miss a little of it. Were there any white men who spoke tonight?

PAUL BEGALA: You know, I -- well, you know, Joe Biden kind of wandered in--

BEGALA: --For a little while at the end of Kamala's speech. But I don't think so.

LEMON: No. I don't think I've ever seen that. It was just women and mostly women of color. Or women and a woman of color.

BEGALA: My crowd, the white men so look this up, I’m kind of an expert--

LEMON: There was one, right?

BEGALA: Angela's in on it. This is what happens when you expand the talent pool. You get more talent. People think guys like me, white guys who are Democrats, that we're for diversity for some PC, softy, touchy, feely. No! I'm for it because you get more talent, when you bring in more talented people.

CHRIS CUOMO: Change your primary calendar so more of them have a chance to win.

After some joking around, Lemon tried to get Begala to backtrack from his comments.

“You say bring more diversity to the tent. That doesn't -- because some in America might think you're serious. That doesn't mean no white men,” Lemon teed up Begala.

“That means a bigger tent. You include people, America looks like--” Lemon started to say before Cuomo cut him off to complain these comments were going to be tweeted by Ted Cruz the next morning.

“They’re going to talk BS all the rest of the election,” Lemon said in exasperation.

CNN commentator's offensive comments were paid for by Uber and Sandals Resorts.