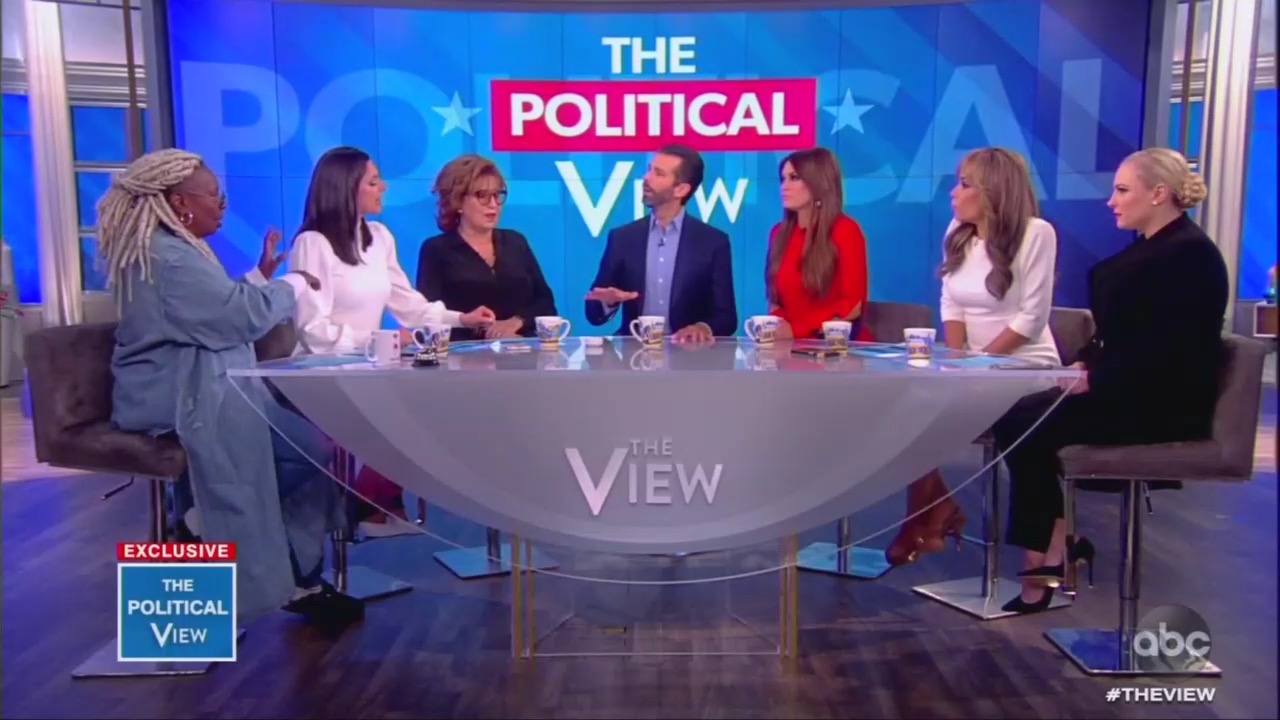 This was definitely a show for the record books. Donald Trump Jr. and Kimberly Guilfoyle were greeted with loud boos as they appeared on The View Thursday. Despite the hosts’ abusive behavior towards them, Trump and Guilfoyle were still able to land some good points about the media’s bias towards President Trump. Trump even called out the View’s network, ABC, for its part in covering up Jeffrey Epstein’s connection to Bill Clinton, during the 2016 election.

Co-host Abby Huntsman sounded just like her leftist peers at the table, began laying into Trump for tweeting the whistleblower’s name, saying it was "something that dictators do." After a back-and-forth, Trump pointed out ABC is trying to punish a different “whistleblower” who got their own reporter on camera admitting they killed a story that would’ve harmed Clinton in the 2016 election:

"ABC is right now chasing down a whistle-blower about all of the Epstein stuff because those stories were killed. So If we're going to have the conversation about the outrage about whistle-blowers," he stated before Whoopi tried to shut him up, adding, "It's hypocrisy...The mainstream media is left leading and I don't think anybody doubted that for a long time, but they have gotten rid of the pretense of objectivity."

As the discussion drifted to impeachment, Guilfoyle, formerly a Fox News host and now a campaign surrogate for President Trump, called out the hosts for being guilty of trying to “undo” the election days afterwards:

“Even on this show the first day after the election, it said, and now let's start with impeachment. This has been something that's going on. It's a concerted effort by a lot of people who were disappointed by the results to of the election to undo it and remove a duly elected president of the United States,” she stated.

“Well it was on this show on Nov. 9th,” Guilfoyle stated, perhaps referring to the Nov. 9, 2016 segment where Joy Behar declared the hosts would be the “only check” on President Trump.

Still they feigned they forgot their own words. “It wasn't!” Whoopi shouted.

Afterwards, the hosts grilled Trump about the whistleblower, again, which Trump pointed out was public knowledge and he saw it on the Drudge Report. After four or five Trump supporters sitting in the front clapped briefly, Behar angrily shouted at them, “Listen this is not a MAGA rally Ok?Calm down!”

As Trump brought up that “no sitting president has taken the heat [from the media] that President Trump has,” Whoopi again exploded with, “That is bulldog! That is bulldog!”