MSNBC: 'Everyone' Agrees Trump's a White Supremacist; Prove You're Not Racist by Voting Democrat 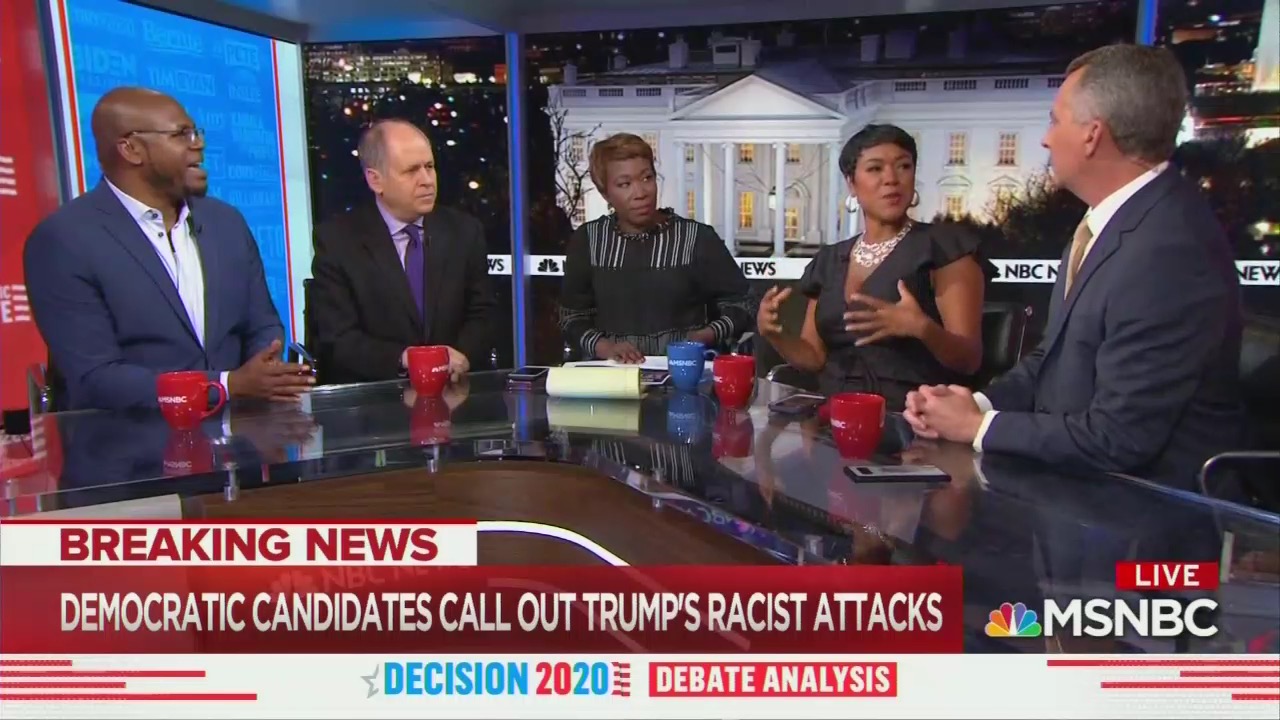 In the early hours of Thursday morning following the Democrat debate, a race-obsessed MSNBC panel complained racism wasn’t brought up enough during the debate. In a mind-boggling discussion, the analysts urged Democrats to call out white “privilege” while insisting that whites who voted for Trump were racist, and needed to vote against Trump because he’s a white supremacist. The panel clearly couldn’t decide whether they wanted to attack white Trump voters as racists or get them to vote Democrat. So they decided, let’s do both!

The Root contributor Jason Johnson and The Beat DC’s Tiffany Cross started off by complimenting Democrat Kirsten Gillibrand for calling out white women’s “privilege,” and insisting the rest of the 2020 candidates needed to follow suit because that would “animate voters.” From there, the panel broadened to attack all whites who voted for Trump as racists, who needed to be convinced Trump was a racist, to vote against him in 2020 (Logic is in short supply at MSNBC):

“We can start from the perspective that everybody understands that Donald Trump is a racist and a white supremacist. We're not trying to convince anybody of that point,” Cross insisted.

Jolly argued “a convincing leader” could convince Trump supporters that they needed to flip their vote to blue, before praising many of the Democrats on stage earlier that night.

But Cross argued white Americans were OK with racism:

It's really hard for I think America and for Americans to acknowledge that this is a racist country, founded on racism…[T]here is a misunderstanding that you can be okay with racism and not be called a racist. For people of color across the country, it's really hard to take that.

Former Newsweek editor Jonathan Alter claimed a lot of whites were in denial they were racists: “There are a lot of white Americans who don't want to think of themselves as racist,” he claimed, adding that many of them “voted for Obama” to convince themselves they weren’t bigoted. He said that they just needed convincing to vote Democrat:

“If they can be convinced that even if you are not a racist, if you vote for a racist, it's giving aid and comfort to racists--” he began before being cut off by Johnson.

“I agree with you but that just takes too much time!” he concluded. “At the end of the day, name one person in America who will not vote for Trump because he's a racist because they knew he was a racist when he got elected!” Johnson gushed.

Liberals at MSNBC clearly haven’t learned anything from 2016.