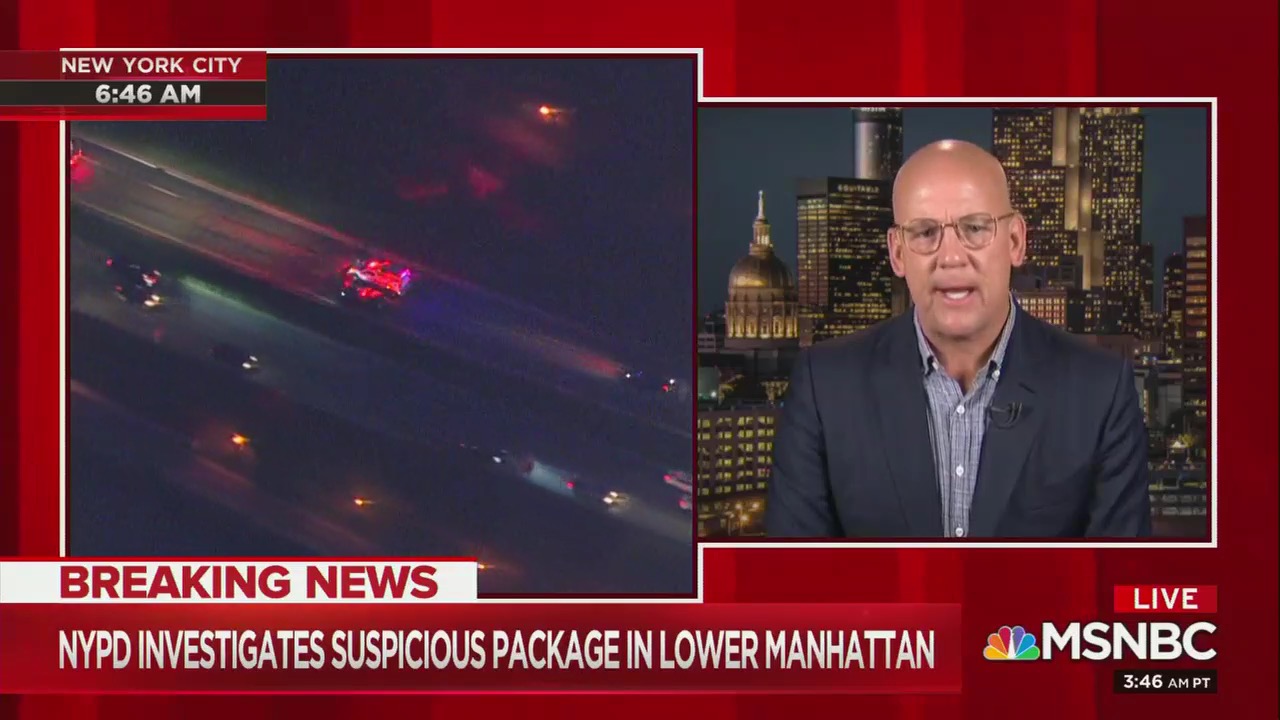 Less than 24 hours after several packages containing pipe bombs were intercepted on their way to prominent Democrats and the headquarters of CNN, a similar package was found on its way to one of the homes of liberal actor Robert De Niro Thursday morning. On MSNBC’s Morning Joe, anchor Willie Geist broke the news, and contributor John Heilemann made it an opportunity to blame conservative media and President Trump for inspiring a Trump supporter to carry out these attacks.

After Geist broke the De Niro news, Heilemann brought up the actor’s history of verbally attacking President Trump from award show stages in the past. He lumped in the actor with George Soros and Maxine Waters as a “bogeyman” for Republicans and conservative media, saying he fit the profile and “pattern” of the “rogues’ gallery that the right has decided to target:”

These people have been, Willie, among the most vocal critics of Donald Trump. Everybody remembers Robert De Niro at the awards show standing up on stage and dropping an F bomb directly on the president's head... [V]ery much a bogey man along with George Soros, along with Maxine Waters and the kind of person who is a staple of far right anti-democratic rhetoric, someone who is called out frequently in Republican ads, in Republican rhetoric. ...This is not one that deviates from the pattern. It's one that reinforces the pattern of where these bombs have been sent out over the course of the last 24 hours.

These are people who have been fierce critics of the president’s and then have become whipping people, whipping boys, whipping girls, whatever you want to call it, for the president on the stump and, again, no just in the president’s rhetoric, but also in the rhetoric of a lot of conservative media, whether it's in the form of advertising, whether it's in the form of online commentary, whether it's social media, these are people who are, who you hear cited again and again and again in conservative rhetoric as the people who, quote, hate Donald Trump or hate America that this list is pretty much the rogues’ gallery that the right has decided to target.

Just a half hour later, Heilemann dismissed the idea that the too-obvious hit job was perhaps a false flag operation, and clung to his argument that this was a Trump supporter’s fault:

Is it possible, is it possible that there's some kind of a false flag operation here? Again, without knowing who the person was that did this, the perpetrator or motivation, I don't think we can rule out anything. But a much more reasonable and a much more plausible suggestion of potential motive here is the more straightforward one which is this is an attempt by someone out there who having dwelled in the atmosphere of Donald Trump's strategy of excitement over the last two years that someone has decided to target critics of President Trump and tried to harm them and tried to intimidate -- at a maximum harm them physically. These pipe bombs were functional. Try to harm them. Not just harm them but intimidate and silence President Trump's critics. That's the most reasonable assumption. Its not the only possibility but its the most plausible one on the table right now.