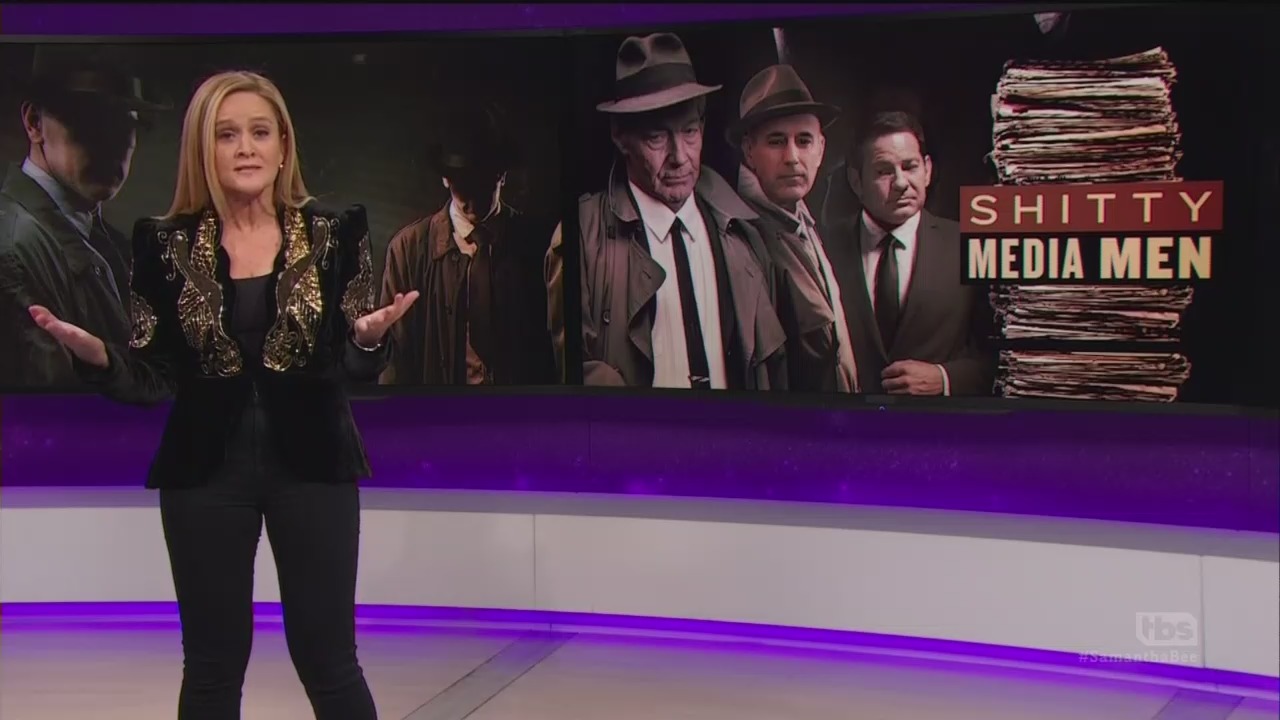 Liberals in the media will say anything to justify why they turned a blind eye to sexual predators in their midst. Take TBS comedian Samantha Bee, who tried to pretend on her show, Full Frontal, last night, that these men’s “misogyny” was well evidenced by their bias against Hillary Clinton.

She moved on to note the most recent development, that feminist Lena Dunham had warned the Clinton campaign about fundraising with Harvey Weinstein but they ignored her. The outspoken, Hillary-supporting-host wouldn’t let Clinton’s excusal of a rapist tarnish her image of Clinton:

“We don't know if this info made it all the way to Hillary but it made it to her staff. Oh, my admiration for you is so complicated. Maybe she really did have a stroke in the specific part of her brain that identifies shitty men,” she shrugged.

Not wanting to be too harsh on Clinton, Bee turned the tables, somehow claiming this was just evidence of the sexist bias against Hillary Clinton:

“But truthfully, any woman who entered the workforce before November 2017 had to have such a stroke just to survive and no one needed it more than Hillary. Virtually every man whoever expressed an opinion about her in front of a camera turned out to be a huge creep,” she began to argue.

Bee then played clips from interviews or comments CBS’s Charlie Rose, NBC’s Matt Lauer, and MSNBC’s Mark Halperin had made about Clinton in 2015 and 2016. Bee’s “evidence” stretched thin, as there really wasn’t much to back up her argument.

Bee mocked Rose for asking the “first female presidential candidate” about the “really important stuff--emails!” in a July 19, 2016 interview.

“Do you think the e-mail crisis contributed to the question of trust?” Rose is shown on video asking Clinton. In another section he presses Clinton on the notion that there was no evidence that her e-mail server got hacked.“But some would suggest that’s the reason they were very good at it, because there’s no evidence of it,” he stated.

Moving on to Lauer, Bee played a series of creepy clips of the former NBC anchor, including one where he forced “Miss Piggy” to kiss him.

“He molested a muppet on live TV!” Bee joked. “Which I guess qualified him to moderate a presidential forum? And he used that platform to see how presidential Clinton could be while also being shushed.”

She played a few quick clips of Lauer interviewing Clinton in a September 7, 2016 presidential forum, where Lauer behaves like a pushy moderator, urging Clinton to wrap up her answer, a handful of times.

Bee expressed her “rage” at watching Lauer interrupt his subject (because that never ever happens in televised interviews,) as if it was sexist behavior:

“Oh, yeah! Now I remember watching that forum. That was the day my entire female staff started their periods out of their eyes from pure rage. You can't just interrupt women when they're talking like that. Matt, what do you think this is? Every business meeting ever?” she snarked.

“And fellow creep and part-time smirk model Mark Halperin was, surprise, surprise, obsessed with Hillary so when covering her candidacy he asked her the intelligent nuanced question, why doesn't she act more like a man?” Bee ranted.

In a May 16, 2016 clip, Halperin criticized Clinton for not attacking Trump “with humor” as he did to her. “She’s being kind of aggressive, but not that funny,” he says, grimacing.

Bee gushed, “It's time to ask ourselves how can men who hate women be objective journalists?”

“That was a trick question. Everyone knows that men who hate women can be anything they put their minds to,” Bee cracked, playing a clip of Donald Trump being sworn in.

She ended her tirade by playing a supercut of various reporters, mostly from Fox News, blasting Clinton for her “likeability” problem. “What tipped us off us off that there was a misogyny problem in media?” Bee snarked.

Still ranting, Bee made her point that somehow these “pubes” “affected the election:”

Yeah, why is that shrill robot so guarded? Why, tell me? We'll never know how much these pubes affected the election but what we do know is that their industry gave us four times more coverage of Hillary's email scandal than they did of Trump's gross behavior with women. To be fair, they were probably typing it with one hand. But I'm not saying men shouldn't talk in public anymore. I'm just saying maybe women shouldn't listen.

Bee’s weakly-supported rant is all the more ridiculous when it’s contrasted with the many other interviews these journalists have done with Clinton in the past few years. Take Rose for example, who sat down with Clinton for a full hour in September of 2017 to read her glowing book reviews, or in 2014 when he called Clinton his “friend” and read her a Maya Angelou poem dedicated to her.

Or even Lauer, who sympathetically coddled Clinton in September of 2017, asking about her “pain” and if Trump “stole the election” from her.

Not to mention that all of these anchors, including Halperin, spent much more time bashing Donald Trump than they did giving any kind of negative questions to Hillary Clinton.