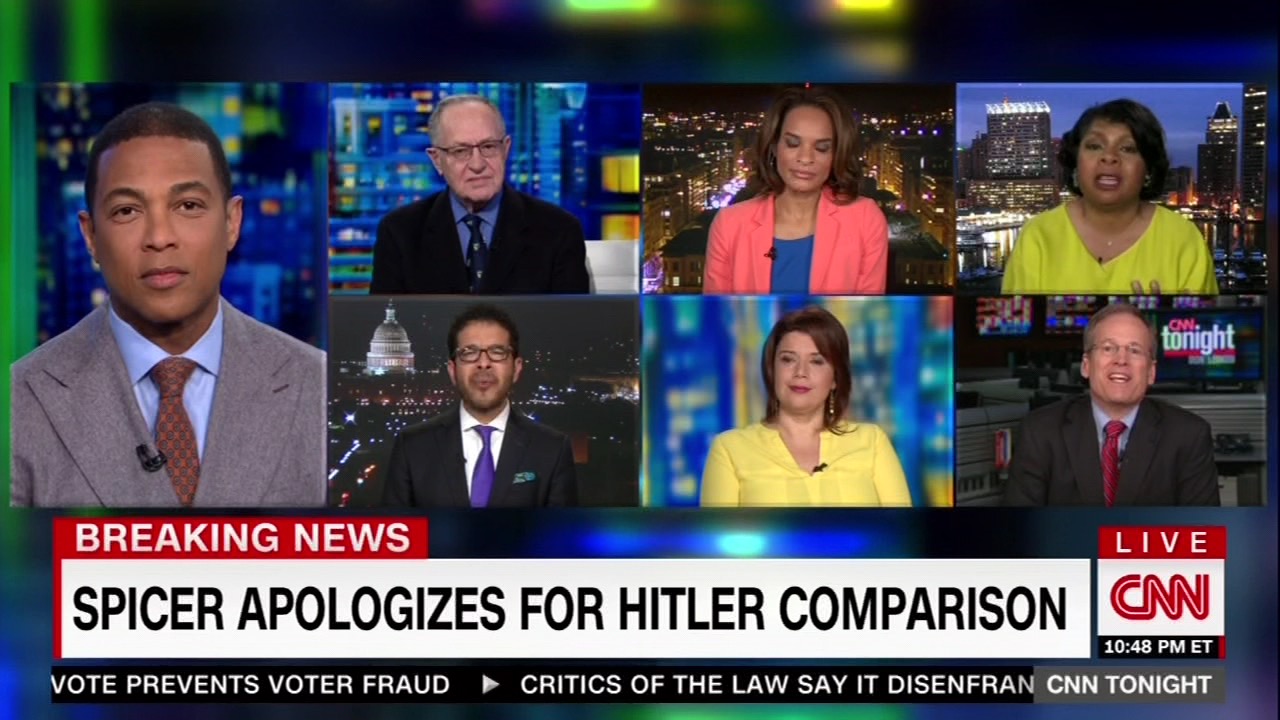 American Urban Radio Networks White House Correspondent and newly minted CNN analyst April Ryan played the race card yet again in an interview on CNN Tonight With Don Lemon Tuesday night. Not only that, but she laughably denied that she was a Democrat or partisan.

In a panel Skype discussion on Sean Spicer’s Hitler blunder during yesterday’s press conference, former Trump campaign advisor Jack Kingston accused Ryan of only being angry at the gaffe because she was an anti-Trump “Democrat.” This made the liberal panelists, Ana Navarro and April Ryan, go off the rails accusing Kingston of racism. To make matters worse, Ryan adamantly denied she was a Democrat, or had ever identified as one publicly.

As panelists spoke over each other, Ryan begged the panel to not make this issue a “partisan one.” “It’s not about politics but about people who were hurt,” Ryan stated. Kingston then interrupted her rebuke, by mistakenly calling her “Ana” [Navarro] (who both happened to be wearing lemon colored blouses.)

KINGSTON: You’re above politics but you're not criticizing--

RYAN: This is April. I'm sorry.

KINGSTON: I'm sorry. I can't see who's talking. I apologize.

NAVARRO: Not all colored girls are the same, Jack.

RYAN: I never said I was a Democrat. I never said that I was a Republican. [wagging her finger] You don't know my politics!

NAVARRO: She is a journalist!

RYAN: He just went to a whole another -- so I'm a Democrat because I'm black?

NAVARRO: No, no. You're a Democrat because -- he thinks you're me. That's the problem he’s having.

NAVARRO: Jack, quit while you're behind.

Ryan here is mincing words. She may have not ever come out publicly to declare what party she affiliated with, but her reporting history and affiliations with Democrat groups clearly shows where she stands ideologically.

It doesn’t take a rocket scientist to figure out that a reporter who’s worked at American Urban Radio Networks for the past 20 years, frequently asks questions on behalf of the CBC (which has 48 Democrats to 1 Republican), has an author profile on the left-wing Huffington Post, and who’s frequently set up against conservative commentators on CNN, just might be a liberal.

Beyond that, we have plenty of proof of Ryan speaking like a Democrat in her position as a White House reporter over the years. From begging Obama to not allow Republicans to make budget cuts, to touting Democrats complaints, to asking Bush if he would listen to the Congressional Black Caucus’ demand for diplomacy instead of war. As a media analyst, she frequently brings up race as an issue to bash the right for.

Even just before this exchange on CNN, Ryan was defending the DNC for calling out Spicer as an anti-Semite, in an argument with Democratic panelist Alan Dershowitz.

ALAN DERSHOWITZ: What happened here is the guy screwed up. He apologized. Apologized from his heart. I'm prepared to give a pass on this. I tell you who I’m not giving a pass: the Democratic National Committee, that immediately decided to politicize this and send out a media tweet saying we can't tolerate anti-Semitism. Even a whiff of anti-Semitism. This is the Democratic National Committee, who has as its co-chairman Keith Ellison -

DERSHOWITZ: Let me finish. Who didn’t recognize the fact that he was working for an anti-semite Farakkahn. This is just hypocrisy and I think we should not make politics out of this.