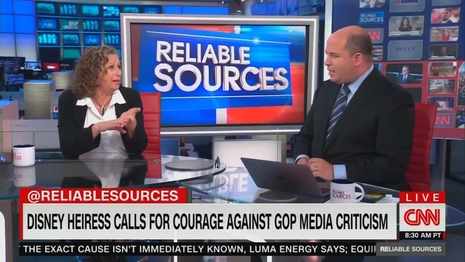 During Sunday’s Reliable Sources on CNN, host Brian Stelter continued his obsessive coverage of what he claims is the conservative's media war against the Walt Disney company by bringing on Abigail Disney, the granddaughter of co-founder Roy Disney, to discuss the controversy surrounding her family’s company.

“These GOP media stars can claim they are just protecting kids but they are also demonizing gay teachers and condemning inclusive Disney shows,” Stelter said before dismissing the Disney criticism as “a midterm campaign strategy for the GOP.”

Once he got his digs against the GOP out of the way, he went to Abigail Disney and proceeded to ask her the very nonobjective question: “how do you feel when you see it [Disney] portrayed as this child abuse indoctrination cult?

Disney raised eyebrows right off the bat when she said she’s witnessing a “coordinated strategic plan unfolding” to attack her family’s company “because it's so woven into families,” and rolled out another conspiracy theory that “if you can create this idea that somebody is in there trying to indoctrinate your child, my goodness, the paranoid imagination can run circles with that.”

She then remarked that she understands “why it's been selected in this strategic -- whatever strategic meeting they had for what they would turn to next.”

When she finished rambling, Stelter asked her for clarification “when you say they have a strategy here, who are you referring to?” Disney’s response was to double down on her wild theory that the attacks on the Walt Disney company are a conspiracy by people meeting in secret:

Well, by they I mean there are huge funders of the right-wing movement that like to remain quiet and they gather in meetings and they make decisions about what's the message that's resonating, what's the message that's not. We can't pretend that's not happening. And so this attack against Disney was so timed and rolled out so strategically that it was really hard for me to imagine that it didn't come from a series of decisions that got made in the background.

Stelter’s only response to that loony claim was to nod his head and say “I see.” He didn’t push back or tell her what she said is a pretty outlandish claim. He instead moved on to another question.

Perhaps he didn’t push back on her conspiracy theory of “right-wing movement” leaders meeting in secret meetings to decide to attack Disney because Stelter had his own crazy theory that “certain individuals [are] going full QAnon” in their attacks on Disney.

It should be noted that nobody in the Florida Republican Party, the DeSantis administration, or the conservative movement at large decided to criticize the Walt Disney company until they decided to come out against the Parental Rights in Education bill. So her theory doesn’t hold up under the slightest bit of scrutiny.

This delusional segment was made possible by Angi and Lincoln. Their information is linked so you can let them know about the biased news they fund.

To read the relevant transcript of this segment click expand:

BRIAN STELTER:  Judge Ketanji Brown Jackson was confirmed to the Supreme Court this week, a historic milestone for the U.S., but the process also showed how poisoned the country's politics are. As Joan Walsh wrote in this column for The Nation, Republicans used her confirmation hearing to mainstream the notion that Democrats protect pedophiles, it's a sexual panic strategy aimed at the November midterms and beyond. Child abuse, quote, unquote, grooming kids for sexual predation, this really is a popular charge in GOP media circles right now. They are smearing their opponents as either pedophiles or being pro-pedophile. And some commentators are trying to attach that horrible charge to of all places the Walt Disney company.

STELTER: These GOP media stars can claim they are just protecting kids but they are also demonizing gay teachers and condemning inclusive Disney shows. This is clearly a midterm campaign strategy for the GOP from Fox to NewsMax to Donald Trump. In fact, at a rally last night Trump claimed public schools are quote, replacing reading and math with pronouns and gender studies. And he railed against the government spending money on quote, transgenderism.

So that's why liberals are watching this and fearing a roll back of LGBTQ rights. This is a big story and Disney is one part of it. Joining me now is Abigail Disney, granddaughter of co-founder Roy Disney. She has never shied away from speaking out against the company, but in this case she also has some kind words for Disney as she also calls for the company's executives to find courage in the face of criticism. Abigail, thanks for coming on the program.

STELTER: So, what is the Walt Disney company actually and how do you feel when you see it portrayed as this child abuse indoctrination cult?

DISNEY: Well, what I'm seeing happen is a pretty coordinated strategic plan unfolding and Disney seems like the biggest target because it's so woven into families. And so if you can create this idea that somebody is in there trying to indoctrinate your child, my goodness, the paranoid imagination can run circles with that. Yeah, and so I understand why it's been selected in this strategic -- whatever strategic meeting they had for what they would turn to next. But this is absurd. The thing that Disney stands for more than anything in every film and especially in the animation where there is a gay character or not is love and acceptance and family and joy. And so they're trying to inject something into what Disney does that has nothing to do with what Disney does.

Whether or not there are gay characters and I keep wondering what is their theory of change exactly because if you were to erase every reference to gayness and gay people from the planet, which is sort of what the don't say gay bill feels like, will children not become gay? Do they need to be recruited and groomed or are people just gay? And I think that that's a hard question they need to ask themselves because if you go back through history there have been gay people whether or not the word was ever spoken. So this is kind of a -- it's an ineffective way of going about what they want. It's an attempt to push history backwards and it denies the fact that everyone conservative or not has a gay friend or a transgender family member. We're all in it together now and I think it's all of our fight.

STELTER: When you say they have a strategy here, who are you referring to? Certainly Ron DeSantis and state lawmakers in the Republican Party in Florida advanced this parental rights in education bill, the so-called don't say gay bill. That certainly is at the root of this current clash with Disney which has now become much bigger. Is that who you mean when you say they?

DISNEY: Well, by they I mean there are huge funders of the right wing movement that like to remain quiet and they gather in meetings and they make decisions about what's the message that's resonating, what's the message that's not. We can't pretend that's not happening. And so this attack against Disney was so timed and rolled out so strategically that it was really hard for me to imagine that it didn't come from a series of decisions that got made in the background.

STELTER: I see. Your advice for Disney is what? In your column you say the leaders need to be courageous. In what way?

DISNEY: I think that there's always this talk of neutrality in business and just leave us alone.

STELTER: That's what it seems like the CEO Bob Chapek was trying to do, just stay out of it, remain neutral, not try to offend anybody.

DISNEY: Right, right. And it was a hard thing to claim when it was shown that he had already given money to Dennis Backsly and Ron DeSantis and so forth. So you can't claim neutrality if you're supporting the people who write these laws. But on top of it there is no neutrality anymore. There was a time maybe when there was a public square where people could go with an open mind and make it up but it's been eroded, and eroded and eroded by the toxicity and polarization of the public space. So there is no business, there is no activity in American life at this point that hasn't been politicized and so you cannot pretend neutrality because if the momentum on the right is against people's rights and away from love and kindness, you can't stand there and do nothing and tell everybody you're neutral. If you do nothing you let this other thing go forward.

STELTER: What worries me, there is this spectrum, like there’s the crazy QAnon cult stuff, which is child sex trafficking and then there is the milder version which is part of this which is fearing what kids are learning in school about gay people and there is a spectrum here and it exists on a spectrum. So you’re going to have certain individuals going full QAnon and then you have GOP politicians that are just worried about their straight kids and not worrying about gay kids. And so we’re going to see this for the next six months through the midterms. Whether we see it beyond then, I don't know.