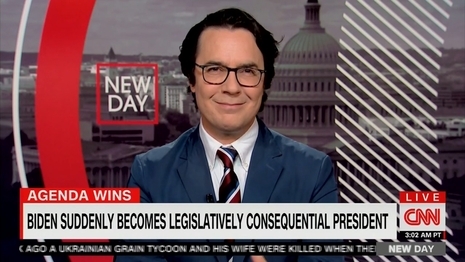 It was a challenging task but an esteemed panel of NewsBusters editors led by MRC President L.Brent Bozell and MRC’s Vice President for Research and Publications Brent Baker boiled down all the biased outbursts from lefty hack hosts, anchors, reporters and pundits in 2022 and on December 15 announced The Brian Stelter Memorial Award for Quote of the Year.

“For history, I think it’s a pretty big deal. You know, if you add up those seven pieces of legislation, it’s a $3.5 trillion agenda that Biden and the Democrats have passed since early last year. There’s really nothing like that in terms of that scale. You have to go back to – depending on how you define these things – to LBJ. So, I think for history, Biden – I don’t think there’s much debate anymore, he is an enormously consequential president and just judging him by his legislative agenda, you know, he’s sort of in that modern pantheon now.”
— Senior political analyst Ryan Lizza on CNN’s New Day, August 8.

“Uncle Joe is back. I thought he was being the leader….If you didn’t believe in democracy before, if you never heard of democracy and you just looked at the body language of this guy, this guy believed every word he said. And I think, I am proud tonight we have a leader like him.”
— CNN political contributor Van Jones on CNN live coverage of President Joe Biden’s State of the Union speech, March 1.

Co-host Joe Scarborough: “When you’re comparing it to other presidents, you can look at LBJ. You can look at Ronald Reagan. You can look at Bill Clinton….The list of accomplishments for Joe Biden and this Democratic Congress in a really divided climate just seem to keep growing.”...
MSNBC’s Way Too Early host Jonathan Lemire: “It has been a breathtaking reversal and remarkable run of success here, most of it while the President has been in COVID isolation….It caps off a remarkable run here from this President….It does rank up there with any modern president, the number of legislation done.”
— MSNBC’s Morning Joe, August 8.

“Joe Biden needed to deliver a powerful statement about democracy today. This was FDR after Pearl Harbor. This is Lyndon Johnson after Selma. This is George W. Bush after 9/11….Think about Lincoln at Gettysburg….That’s the kind of speech that Biden had to make today. We’re at a crossroads in our country. There was no certainty after the Japanese bombed Pearl Harbor on December 7th, 1941, that we would defeat tyranny. There was no certainty after 9/11 that there wouldn’t be another attack. You have to tell America and the world what America stands for.”
— ABC News presidential historian Mark Updegrove on ABC News Live channel coverage of President Joe Biden’s speech on the one year anniversary of the January 6, 2021 U.S. Capitol Building riots.

Co-host Joe Scarborough: “The last six years of Obama’s administration and Donald Trump’s time in the White House, Joe Biden has done more than them, not combined, two, three, four, five, six, seven times. This has been an extraordinarily successful two years, legislatively. Any way you cut it, even Republicans have to admit this privately, and they are. It’s been a hell of a run.”...
Co-host Mika Brzezinski: “Pull out 20,000 feet, world stage, preventing a nuclear war, preventing World War III, check. COVID, he survived it, two bouts of it, never went to the hospital. COVID’s under control….It is all moving in Joe Biden’s direction. He’s got his aviators on, and he’s just getting it done.”
— MSNBC’s Morning Joe, August 8.