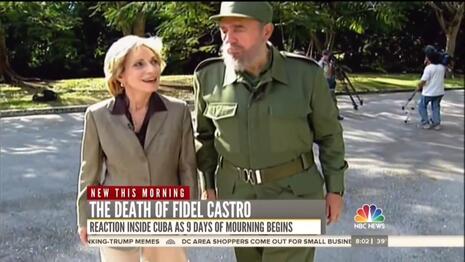 When Castro finally kicked the bucket in 2016, they offered up friendly eulogies to the “George Washington of his country.”

According to The Black Book of Communism, as cited by The American Spectator’s Paul Kengor, the Castro regime was responsible for 30,000 arrests for political dissent and 7,000 to 10,000 were believed to be executed. And that’s not counting the lives Castro was willing to put at risk with his welcoming of Soviet nuclear missiles in the sixties. As Kengor pointed out: “First, there’s the death he was responsible for since seizing Cuba in January 1959, and then, second, there are the incalculable millions more who would have died — not just in Cuba but in America and worldwide — had he gotten his way in October 1962.”

For more than half a century, positive profiles of Castro have appeared in U.S. papers. Back on January 18, 1959, New York Times reporter Herbert L. Matthews exulted in Castro’s seizure of Cuba: “Everybody here seems agreed that Dr. Castro is one of the most extraordinary figures ever to appear on the Latin-American scene. He is by any standards a man of destiny.”

For over 30 years, the Media Research Center has documented the liberal media’s infatuation with Fidel Castro and Cuba’s communism. The most laudatory coverage of Castro and his communist revolution’s “achievements” came when an American news network decided to visit Cuba for an in-depth examination. Invariably, the U.S. networks granted access to Cuba have rewarded the communist government with promotional coverage of both Fidel Castro and the supposed achievements of his revolution.

For two years, PBS refused to air Nobody Listened, a documentary account of the harsh treatment of Cuba’s political prisoners. In August 1990, PBS finally capitulated but “balanced” the damning expose of Castro’s prisons with the explicitly pro-communist film, The Uncompromising Revolution by Saul Landau, Senior Fellow at the radical Institute for Policy Studies. Landau followed Castro around the countryside, describing how the “force of nature” gave Cuba “action-packed decades of experiments in collective survival and socialist living.” Landau tingled his way through the hour like an overaged groupie: “Fidel touched this young machine adjuster and the man enjoyed a mild ecstasy. I know the feeling.” To PBS, “balance” meant giving a pro-Castro propagandist equal time with the dictator’s victims.

In an April 28, 1991 “Outlook” article, Washington Post Assistant Foreign Editor Don Podesta claimed: “If nothing else, the Cuban revolution has eliminated abject need. The cost may be generalized poverty and zero political pluralism, but, even with shortages, there is no starvation here. Education and medical care are assured for all. And, unlike in most of Latin America, you don’t see naked or even shoeless children in the streets. When Castro speaks of the need to defend the gains of revolution, he means a level of social welfare rare in the underdeveloped world.”

In April 1991, Ted Turner’s TBS station ran a two-hour homage, Portrait of Castro’s Cuba. Narrator James Earl Jones read a gushing, pro-Castro script: “Incessantly involved in affairs around the globe, this island nation has won the respect, sometimes grudgingly, of countries twenty times its size. Castro’s Cuba stands tall in the ranks of nations....Today is a passionate display of national pride. These men [Cuban soldiers returning from Angola] are symbols of all that Castro’s Cuba has aspired to be: A nation to be reckoned with. A major player on the world stage. Defiant, spirited, free.” To show how the Cuban people feel about Fidel, the program quoted an armed militia member: “We want Fidel, he is our father, he is the father of our people. The Revolution is our mother and we feel proud.”

In March 1993, ABC’s Diane Sawyer traveled to Cuba to interview Fidel Castro for Prime Time Live, but only once did she raise the issue of human rights abuses and political prisoners. Upon the dictator’s denial, she dropped the matter completely. The remainder of the interview had the coziness of a People magazine profile: “He grew up a first-rate baseball player and lawyer who married once, divorced. But was mainly driven by his burning desire to crush Cuba’s American-supported dictator Fulgencio Batista. It began with a daredevil attack on the military barracks. Jail. His exile. Then a death-defying two-year fight in the mountains of the Sierra Maestre. He and his small band of soldiers endured and won only because of Castro’s invincible certainty of their destiny.”

In January 1998 on CNN’s The World Today, Havana bureau chief Lucia Newman even managed to put a positive spin on Castro’s rigged one-party elections: “Cuban President Fidel Castro cast his vote in Sunday’s national and provincial assembly elections with enthusiasm. No dubious campaign spending here, no mud slinging, and even less doubt about the outcome in elections where there is no competition. That is because there are as many candidates as seats to be filled, all of them by supporters of the Communist government — a system President Castro boasts is the most democratic and cleanest in the world.”

Here are more examples showing how journalists have spent decades fawning over the wrong side of history:

“There is, in Cuba, government intrusion into everyone’s life, from the moment he is born until the day he dies. The reasoning is that the government wants to better the lives of its citizens and keep them from exploiting or hurting one another....On a sunny day in a park in the old city of Havana it is difficult to see anything that is sinister.”
— NBC reporter Ed Rabel on Cuban life, Sunday Today, February 28, 1988.

“Castro has delivered the most to those who had the least....Education was once available to the rich and the well-connected. It is now free to all....Medical care was once for the privileged few. Today it is available to every Cuban and it is free....Health and education are the revolution’s great success stories.”
— Peter Jennings reporting from Havana on ABC’s World News Tonight, April 3, 1989.

“He [Fidel Castro] said he wanted to make a better life for Cuba’s poor. Many who lived through the revolution say he succeeded....Today even the poorest Cubans have food to eat, their children are educated and even critics of the regime say Cubans have better health care than most Latin Americans.”
— Reporter Paula Zahn on Good Morning America, April 3, 1989.

“Considered one of the most charismatic leaders of the 20th century....[Fidel] Castro traveled the country cultivating his image, and his revolution delivered. Campaigns stamped out illiteracy and even today, Cuba has one of the lowest infant mortality rates in the world.”
— Katie Couric reporting on NBC’s Today, February 13, 1992.

“Frankly, to be a poor child in Cuba may in many instances be better than being a poor child in Miami, and I’m not going to condemn their lifestyle so gratuitously.”
— Newsweek’s Eleanor Clift on The McLaughlin Group, April 8, 2000.

“Elian [Gonzalez] might expect a nurturing life in Cuba, sheltered from the crime and social breakdown that would be part of his upbringing in Miami....The boy will nestle again in a more peaceable society that treasures its children.”
— Brook Larmer and John Leland, April 17, 2000 Newsweek.

“While Fidel Castro, and certainly justified on his record, is widely criticized for a lot of things, there is no question that Castro feels a very deep and abiding connection to those Cubans who are still in Cuba. And, I recognize this might be controversial, but there’s little doubt in my mind that Fidel Castro was sincere when he said, ‘listen, we really want this child back here.’”
— Dan Rather live on CBS the morning of the Elian raid, April 22, 2000.

“The school system in Cuba teaches that communism is the way to succeed in life and it is the best system. Is that de-programming, or is that national heritage?”
— NBC News reporter Jim Avila from Cuba on CNBC’s Upfront Tonight, June 27, 2000.

“For Castro, freedom starts with education. And if literacy alone were the yardstick, Cuba would rank as one of the freest nations on Earth. The literacy rate is 96 percent.”
— Barbara Walters on ABC’s 20/20, October 11, 2002.

“There’s a good chance that Fidel Castro, who marks his 78th birthday today, could keep going for another 40 years, the Cuban leader’s personal physician says....Cuban officials say the same revolutionary zeal that has driven nearly five decades of socialism can overcome the ravages of time....At least 40 different Cuban research groups are said to be at work unlocking the secrets of aging. The research ranges from studying special diets to basic research on genetics.”
— Reporter Eric Sabo in an August 13, 2004 USA Today story headlined, “Cuba pursues a 120-year-old future.”

“For all its flaws, life in Castro’s Cuba has its comforts, and unknown alternatives are not automatically more attractive....Many foreigners consider it propaganda when Castro’s government enumerates its accomplishments, but many Cubans take pride in their free education system, high literacy rates and top-notch doctors. Ardent Castro supporters say life in the United States, in contrast, seems selfish, superficial, and — despite its riches — ultimately unsatisfying.”
— Associated Press writer Vanessa Arrington in an August 4, 2006 dispatch, “Some Cubans enjoy comforts of communism.”

Anchor Don Lemon: “Cuba as a model for health care reform? Well, we’ll see. It is a poor country. But it can boast about health care, a system that leads the way in Latin America. So, what are they doing right?...”
Reporter Morgan Neill: “There are some impressive statistics. According to the World Health Organization, Cuba’s life expectancy is 78 years. The same as Chile and Costa Rica and the highest in Latin America. And its infant mortality rates are the lowest in the hemisphere.... Health officials admit the system isn’t perfect, but, they say, no one falls through the cracks.”
— 12pm ET hour of CNN Newsroom, August 6, 2009.

“Even Castro’s critics praised his advances in health care and in education....Fidel Castro was considered, even to this day, the George Washington of his country among those who remain in Cuba.”
— Correspondent Jim Avila during ABC News coverage of Castro’s death early in the morning of November 26, 2016.

“Many saw positives, education and health care for all, racial integration....Castro never lost faith in the revolution.”
— CNN correspondent Martin Savidge, in a pre-produced obituary, aired during CNN's 1am November 26, 2016 ET live coverage of Castro’s death.

“A declared socialist, he dramatically improved health care and literacy....He never tolerated free elections or dissent but gave his people better health care and education....I think he will be revered as someone who brought education and social services and medical care to all of his people.”
— NBC correspondent Andrea Mitchell during MSNBC’s breaking news coverage of Castro’s death in the early morning of November 26, 2016.

“It’s still one of those nations where you see donkey carts alongside cars, trucks and buses in downtown Havana, because that’s exactly what they’d rather have for transportation.”
— Disgraced ex-NBC Nightly News anchor Brian Williams during MSNBC's live coverage of Castro’s death early in the morning of November 26, 2016.