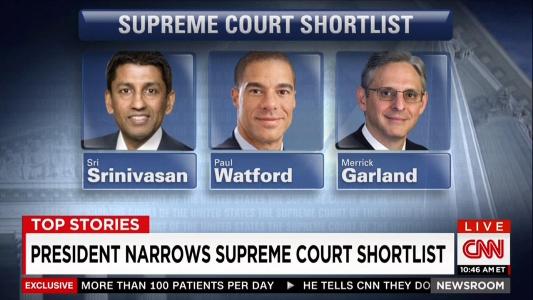 Whomever Barack Obama selects to fill the vacancy left by the death of Antonin Scalia expect the liberal media to worry the selection isn’t progressive enough. As might be expected, journalists criticize the Supreme Court appointments made by Republican presidents as “hardline” and “very conservative.” But even the nominees elevated by recent Democratic presidents have been challenged as not liberal enough for the media’s taste.

In 1991 Clarence Thomas was deemed too conservative, with even one pundit disgustingly sliming: “They didn’t pick him because he was black. They picked him because he’s a black conservative...If you gave Clarence Thomas a little flour on his face, you’d think you had David Duke talking.” In 2005, Samuel Alito’s nomination met with worry as ABC Jessica Yellin fretted: “his writing is so similar to [Antonin Scalia] he’s sometimes nicknamed ‘Scalito.’”

Even the 2005 nomination of John Roberts, who would go on to twice support President Obama’s liberal health care law, was painted as a far-right reactionary. NPR’s Nina Totenberg exclaimed that reviewing his work, “I was actually quite surprised at how very, very conservative he was.”

On the other hand, when Barack Obama nominated Elena Kagan in 2010, CBS’s Maggie Rodriguez worried that “some analysts” actually believe that Kagan “may actually shift the Court to the right.” MSNBC’s Peter Alexander observed: “On the left, she may not be liberal enough.”

Of Sonia Sotomayor’s 2009 nomination ABC’s Claire Shipman said her case history made it “very hard for people to make the case that she’s a typical, you know, elite liberal judicial philosopher. I mean, really, she’s not.” And NPR’s Nina Totenberg absurdly spouted: “You know, for a Democrat, she has a pretty conservative record, a very much in the mainstream record....In fact, on a lot of criminal law issues, you could say that she’s more conservative than some members of the Supreme Court, including Justice Scalia.”

Ruth Bader Ginsburg’s nomination in 1993 drew this response from then U.S. News & World report editor Steven Roberts: “Anybody who expected a raving liberal from Bill Clinton doesn’t know who Bill Clinton is or understand his background.”

The following examples of liberal journalists worrying about Supreme Court nominees being too conservative (even from Democratic presidents) are from the Media Research Center’s archive:

REPUBLICAN NOMINEES ARE TOO CONSERVATIVE

“It’s a shame that Thomas and [Thurgood] Marshall are even mentioned in the same breath...But I still advocate his confirmation. First, if Hugo Black, who once was a member of the KKK, could become a distinguished liberal justice, there is a hope that a Negro can turn black. Maybe Thomas, who would have lifetime employment as a justice, could find his soul.”
—  USA Today Inquiry Editor Barbara Reynolds, July 5, 1991.

“To fill the seat of one of the greatest civil rights heroes, Bush found a black who actually believes in the Republican notion that minorities need the absence of discrimination, not affirmative action, in order to succeed.”
—  Time Senior Writer Margaret Carlson, July 15, 1991.

“It may sound bigoted; well, this is a bigoted world and why can’t black people be allowed a little Archie Bunker mentality?....Here’s a man who’s going to decide crucial issues for the country and he has already said no to blacks; he has already said if he can’t paint himself white he’ll think white and marry a white woman.”
—  USA Today Inquiry Editor Barbara Reynolds in The Washington Post, September 10, 1991.

“Clarence Thomas is the best only at his ability to bootlick for Ronald Reagan and George Bush...They didn’t pick him because he was black. They picked him because he’s a black conservative. And the thing that bothers me about his appointment —  if they had put David Duke on, I wouldn’t scream as much because they would look at David Duke and reject him for what he is. If you gave Clarence Thomas a little flour on his face, you’d think you had David Duke talking.”
—  Columnist Carl Rowan on Inside Washington, July 7, 1991.

“There was plenty of reason to vote against him without this. It seems to me that if he were an experienced jurist, if he’d ever written an opinion that was notable, that we wouldn’t be so obsessed with what is a marginal issue. But senators who want to vote against him have plenty of reasons. They don’t have to hang it on sexual harassment....Using racism when civil rights organizations oppose him, when his accuser is black, and when he himself has walked away from the civil rights movement and affirmative action is really intellectual dishonesty....[Anita Hill] has done nothing to suggest she has a credibility problem, whereas Clarence Thomas has done a lot to suggest that he can lie pretty easily.”
—  Newsweek’s Eleanor Clift, on McLaughlin Group, October 12, 1991.

“Samuel Alito is a federal judge in New Jersey with established conservative credentials....Alito is considered a law and order conservative, and many Democrats believe he would oppose abortion rights....In choosing Alito, the President has made good on a campaign promise to pick Supreme Court nominees in the mold of conservative Justice Antonin Scalia. Alito once clerked for Justice Scalia, and his writing is so similar to the conservative justice’s, he’s sometimes nicknamed ‘Scalito.’”
— ABC’s Jessica Yellin on the October 31, 2005 Good Morning America about an hour before President Bush nominated Judge Samuel Alito to the Supreme Court.

“He is very conservative, this is a liberal appellate court, but he is the most conservative member on it....The President has picked somebody very conservative, but a very accomplished jurist as well.”
— ABC’s Charles Gibson anchoring live coverage of Alito’s nomination, October 31, 2005.

“His name is Samuel Alito....He was a former U.S. attorney, lots of experience. He’s also quite conservative. So it seems as if President Bush has made this pick to please his conservative base, which means there will be quite a fight.”
— CNN’s Carol Costello on Daybreak, October 31, 2005.

“I want to ask you about this 1991 opinion, Joe Watkins, he was the lone dissenter. He argued that a woman should have to notify her husband before she gets an abortion. Now, let me just say Sandra Day O’Connor heard this same case and Sandra Day O’Connor said this reflects a repugnant view of marriage. Women do not lose their constitutional rights because they’re married....Does this opinion give even you pause? And, again, Sandra Day O’Connor’s notation that it was a repugnant view of marriage?”
— Diane Sawyer to conservative commentator Joe Watkins on ABC’s Good Morning America, November 1, 2005.

“I must say that when I was, spent five hours reviewing all of his documents from when he [John Roberts] worked in the Justice Department, I was actually quite surprised at how, how very, very conservative he was.”
— NPR’s Nina Totenberg on the July 30, 2005 Inside Washington.

“Democratic lawyers who know him, who’ve litigated against him and just think he’s so smart and so honest and is very conservative....People who know him know that John Roberts is a really conservative guy....Don’t forget his wife was an officer, a high officer of a pro-life organization. He’s got adopted children. I mean, he’s a conservative Catholic....a hardline conservative.”
— Totenberg on the July 23, 2005 Inside Washington.

“This is a very conservative man with a strong paper trail that proves it.”
— ABC’s George Stephanopoulos during live coverage of President George W. Bush’s announcement of Roberts on July 19, 2005.

“When she worked for the Clinton administration, Ms. Kagan asked the President to support a ban on all abortions of viable fetuses except when the mother’s health was at risk. And some analysts have used that example to show that she may actually shift the Court to the right, compared with Justice Stevens.”
— CBS’s Maggie Rodriguez to Senator Jeff Sessions (R-AL) on the May 11, 2010 Early Show.

“Who is really most frustrated with the pick? It seems as many liberal groups are upset by this as are conservatives....On the left, she may not be liberal enough - that’s the complaint there. Some progressives say she’s too much of a blank slate to know how she stands on any issue.”
—  Anchor Peter Alexander during the 10am ET hour of MSNBC Live, May 11, 2010.

“The selection of Solicitor General Elena Kagan to be the nation’s 112th justice extends a quarter-century pattern in which Republican presidents generally install strong conservatives on the Supreme Court while Democratic presidents pick candidates who often disappoint their liberal base. Ms. Kagan is certainly too liberal for conservatives, who quickly criticized her nomination on Monday as a radical threat. But much like every other Democratic nominee since the 1960s, she does not fit the profile sought by the left, which hungers for a full-throated counterweight to the Court’s conservative leader, Justice Antonin Scalia.”
—  New York Times reporter Peter Baker in a May 11, 2010  front-page “news analysis.”

“Where does she stand? Liberal activists voicing concerns over Supreme Court nominee Sonia Sotomayor and her stance on abortion. This morning they’re demanding to know if she’s pro-choice or pro-life — and why President Obama never asked.”
— NBC’s Matt Lauer opening Today, May 28, 2009.

Anchor Katie Couric: “Pundits usually label judges as either liberal or conservative, but that won’t be easy with Judge Sotomayor...”
Correspondent Wyatt Andrews: “[President Obama] has found a judge with 17 years experience, but no clear ideology on discrimination, gay rights, or abortion, and who can’t be easily defined by political labels.”
— CBS Evening News, May 27, 2009.

“You know, for a Democrat, she has a pretty conservative record, a very much in the mainstream record....In fact, on a lot of criminal law issues, you could say that she’s more conservative than some members of the Supreme Court, including Justice Scalia, perhaps.”
— NPR’s Nina Totenberg on PBS’s Charlie Rose, July 13, 2009.

“Whenever Chief Justice William H. Rehnquist finds himself in the minority - something that may happen with increasing frequency now that the moderately conservative [Ruth Bader] Ginsburg is replacing the staunchly conservative White - the moderate Stevens, if he is in the majority, would have the power...to decide which justice will write the opinion for the court.”
—  Washington Post reporter Al Kamen, July 30, 1993.

“This is a President [Bill Clinton] who really believes and takes the Supreme Court very seriously. That hasn’t always been the case in recent years. You’ve had some obscure and ideological choices.”
—  Newsweek Senior Editor and CBS News Consultant Joe Klein, discussing Stephen Breyer nomination on May 15, 1994 CBS Evening News.