Media Hand a 'Lifeline' to Hillary on Benghazi 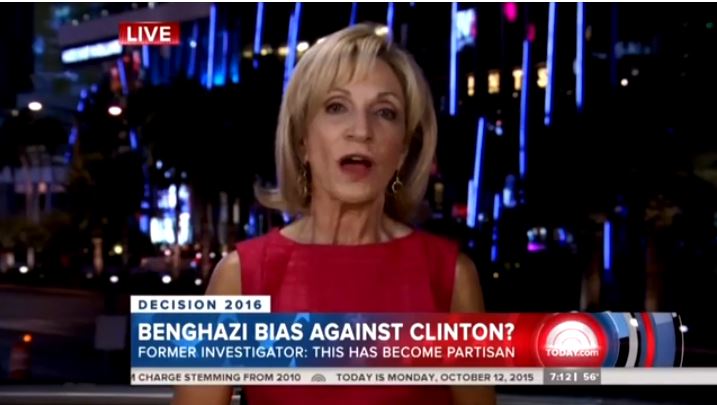 Hillary Clinton is set to testify before the Benghazi committee on Thursday but the liberal media have spent weeks laying the groundwork for her. Instead of putting the onus on Clinton, her now-discredited story of the attacks being spurred by an anti-Muslim video, and her shady scheme to bypass the State Department e-mail system, the media have led up to the hearings by touting the supposed partisanship of the investigators.

Network news viewers have heard journalists proclaim how she received a “political lifeline” from Republican Kevin McCarthy and a “big gift” from Senator Bernie Sanders. Some in the media seem primed to let go of Benghazi as they’ve observed the former Secretary of State is now “brimming with confidence” as she readies to “murder” the now “delegitmized” hearings.

Reporters couldn’t get enough of McCarthy’s gaffe. On September 30 Nightly News, NBC’s Andrea Mitchell roared: “Today an unlikely political lifeline from the likely next speaker. Republican Kevin McCarthy saying the committee investigating Benghazi and Clinton’s e-mails was created to destroy her candidacy.” And after an October 5 Today show townhall with Clinton, Mitchell hyped that she was “on fire...lashing out at the House Benghazi Committee....Seizing on Republican Kevin McCarthy’s damaging admission that the committee was politically motivated.”

CBS’s John Dickerson, on the October 6 This Morning noted: “She got a political gift by Kevin McCarthy....when he suggested the Benghazi committee had driven down her poll numbers. And so she’s showing off that gift, wants everybody to see it because for so long the Clintons have been trying to argue that this Benghazi investigation and the e-mail investigation that grew out of it was politically motivated.” The Washington Post’s Karen Tumulty went further: “The Kevin McCarthy thing has been not only a political gift but it has been sort of a ‘get out of jail free’ card for her.”

When a fired Benghazi staffer came out to call the hearings “partisan,” NBC’s full-time Hillary Clinton defender Andrea Mitchell pumped up his claims on the October 2 Today show: “Increased scrutiny this morning of the congressional committee investigating Benghazi after stunning claims from one of the committee’s former investigators, a career intelligence analyst, Air Force Major Bradley Podliska....The dispute could be a lifeline for Hillary Clinton as she prepares for tomorrow night’s first Democratic debate.”

At that first Democratic debate Senator Bernie Sanders pronouncement that “The American people are sick and tired of hearing about your damn e-mails!” was cheered by CBS This Morning co-host Gayle King, on October 14, as “the line of the night.” Over on the Today show NBC’s Peter Alexander called Sanders’ rant a “big gift” and ABC’s George Stephanopoulos, on Good Morning America, wondered if Sanders had “put the e-mail issue away at least for the primaries?”

This led Bloomberg’s John Heilemann, on the October 16 Today show, to set the table for the hearings this way: “You’ve got Hillary Clinton performing well at this debate, the Benghazi Committee now kind of delegitimized. She’s teed up to have a great day next week, where it could have been a bad – a moment of peril.” The Washington Post’s Charles Lane, in a October 18 Fox News Sunday appearance, opined: “I think she comes in brimming with confidence. She’s been handed a couple of unforced errors by Kevin McCarthy and company.” That same morning, on the CNN’s Reliable Sources, journalist/author Carl Bernstein predicted Clinton was “going to murder” the Benghazi committee “because it has been a witch hunt. It has been partisan. It’s great opportunity for her.”

The last time Clinton testified about Benghazi she received similar praise. The hearing in which she uttered her infamous “What difference, at this point, does it make?” line was applauded by then ABC World News anchor Diane Sawyer on her January 23, 2013 newscast: “And now we turn to the fiery appearance for Secretary of State Hillary Clinton...The indignation, and then, the tears in her eyes...It was a valedictory that showed her indignation and emotion as she ends this tenure on the public stage.” Her colleague Martha Raddatz added: “What a way to end her four-year tenure as Secretary of State...a month a go, she was flat on her back with a nasty concussion,” but “today, this woman who has traveled the world as America’s top diplomat, came to the Hill ready for a fight.” Raddatz touted that Clinton was “in rare public form, at times angry, aggressively on the defense. At another point, choking up over her four lost colleagues.”

Former NBC Nightly News anchor Brian Williams began his show that night announcing that Clinton “leaves her post as the most admired woman in the world in the Gallup poll, for the 11th year in a row.” NBC’s Andrea Mitchell offered a rave review: “Parrying hostile questions all day, Clinton was also the political pro. Massaging big egos, sidestepping attacks when she could. When she couldn’t, giving as good as she got.” Over on CBS Margaret Brennan, on the January 23 This Morning, was impressed at how Clinton “fiercely defended the office that she will soon be leaving” and “took ownership of the State Department’s handling of the attack.”